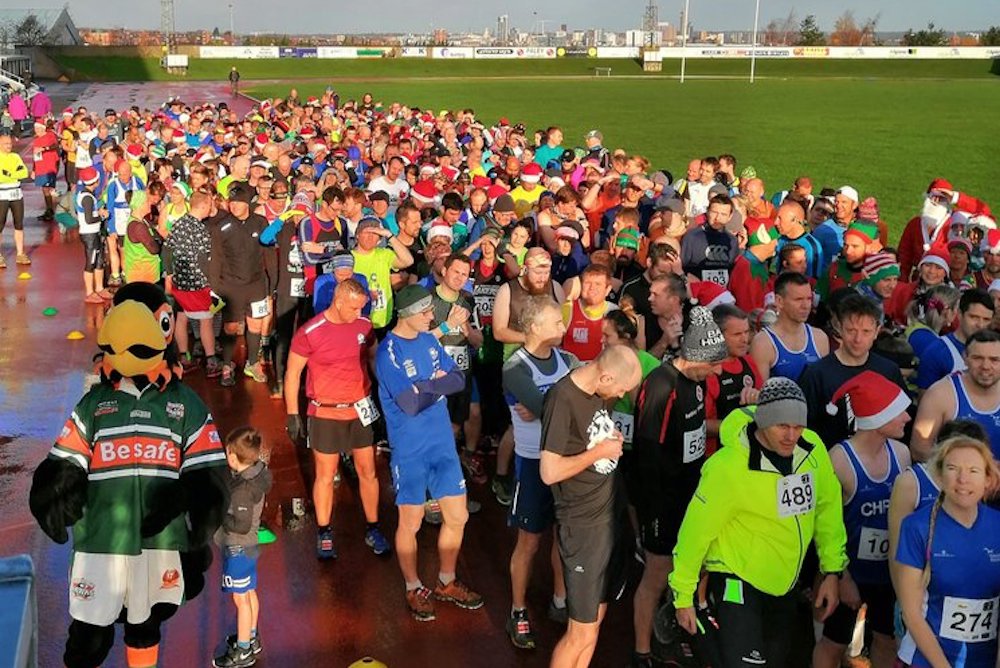 The South Leeds running community put on quite a show with the second annual Bah Humbug 10k trail race on Sunday (8 December 2019).

The sell out event saw 600 runners from across Leeds and beyond tackle tough and at times slippery course on trails through Middleton Park, with the start and finish on the track at South Leeds Stadium.

The race was hosted by the Hunslet Rugby Foundation and organised by South Leeds Lakers, South Leeds Sisters, Morley Running Club and Morley Triathlon Club. Profits from the race will all go back into grassroots sport in the area.

The event was supported by a small army of volunteer marshals who kept runners on the right course and encouraged their efforts, often with sleigh bells and in one case by a trumpet. They also ran a water station at the 5km mark and provided first aid support and were joined by a choir from Mosaic Church singing carols.

“There are so many people who have been involved in this journey but tonight let’s celebrate two Lakers who epitomise our spirit. Jonathon Harding who has put us up there with the elite and Martin Lee whose organisational skills contributed so much to today.”

Many runners chose festive fancy dress including Christmas puddings, elves and nuns on the run as well a good smattering of Santa hats.

Some runners were also fundraising for good causes. For Melanie Arendt, who we featured back in May this was the culmination of a year’s efforts for Diabetes UK:

“The Bah Humbug trail 10k marks the 13th race of a very eventful year. Injuries and illness haven’t stopped me from doing what I planned, whether I ran or walked, I completed every race from 10k to a half marathon. I would like to thank everyone who has helped and encouraged me along the way. Your support has meant so much.”