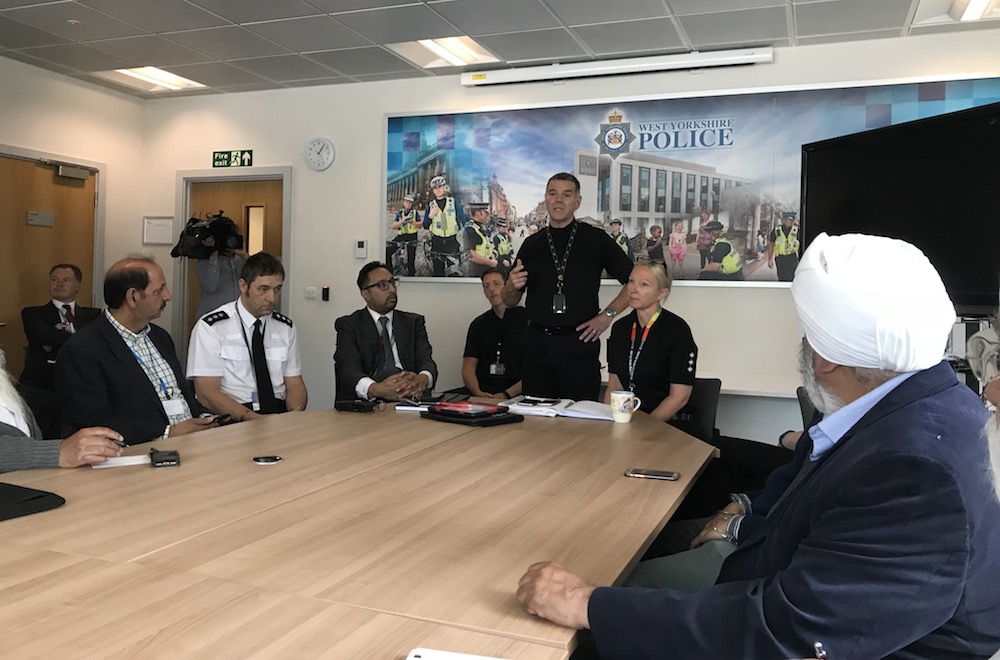 Leaders from the Beeston community met with Police officers at Elland Road Police Station this afternoon (5 June 2018) to discuss the two arson attacks which occurred in the early hours of this morning at Hardy Street Mosque and Lady Pit Lane Gudwara (Sikh temple) in Beeston.

Showing how seriously West Yorkshire Police are taking these incidents, the meeting was addressed by the new Leeds District Commander Derek Hughes who described the attacks as “completely and utterly unacceptable.”

Investigating officers shared where they were up to with the inquiry, which is still at a very early stage. They are currently following up forensic and CCTV leads and conducting door-to-door enquiries. Whilst they don’t have information about a motive yet, they are treating the attacks as hate crimes.

Inspector Ian O’Brien from the Neighbourhood Policing Team explained that patrols would be stepped up in the area and particularly around places of worship and events at community centres. On top of his team other Policing teams will be involved in the area throughout the 24 hour period.

Residents are asked to come forward with any pieces of information they have, however trivial they appear. Have you seen any unusual activity near these places of worship? Or anything else that, looking back, might have been suspicious. If so please contact the Police via the website www.westyorkshire.police.uk/101LiveChat, ring 101 or speak to an officer on the street. If an incident is ongoing you should ring 999.

In an act of solidarity, leaders from Hardy Street Mosque visited the Lady Pit Lane Gudwara this morning to show their support. There was a unanimous feeling in today’s meeting that the community will not let itself be divided by these attacks.

“What has happened today is not good, two places of worship attacked, but these incidents do bring the community together. We have had a good meeting with the police and we are pleased that they are committing significant resources to both solving the crime and reassuring the community. We are a strong community and we will not let anyone divide us.”

South Leeds Life condemns the arson attacks on two places of worship within our community. These were appalling acts intended to intimidate and divide the Beeston community. We must all stand together and show this tiny minority that they will not be tolerated.

We are pleased to see a robust Police response and urge our readers to co-operate with their investigation by sharing information, so that the perpetrator(s) can be swiftly brought to justice.

We urge everyone to keep calm, keep vigilant, and carry on.