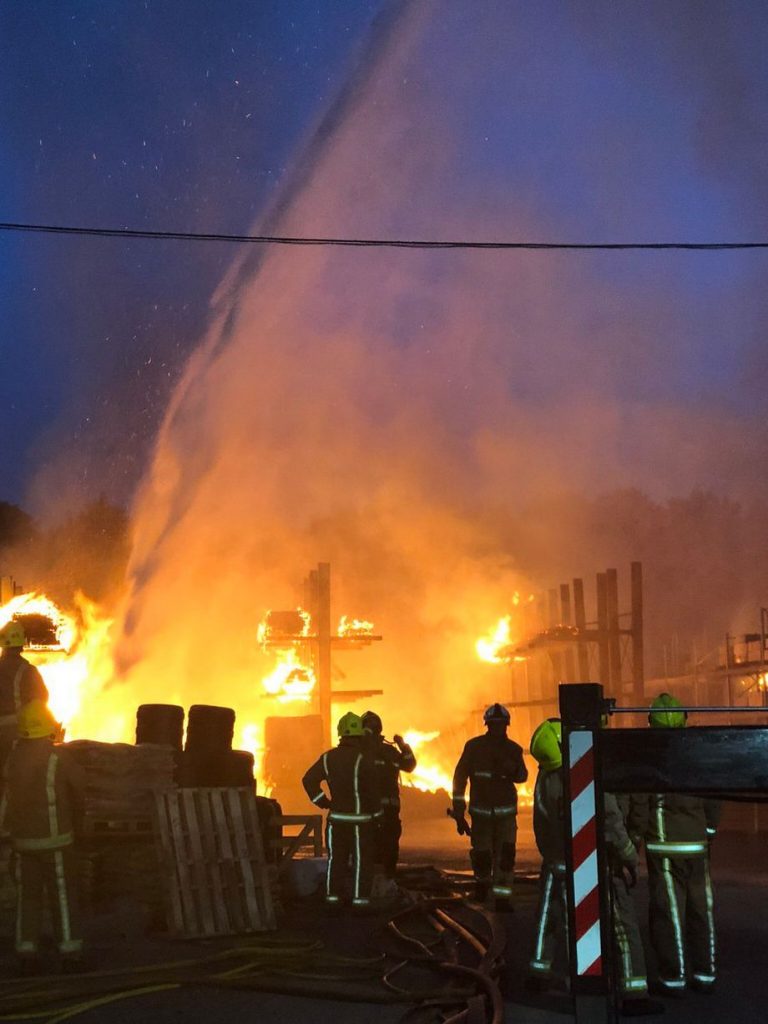 A Hunslet builders yard was last night (in the early hours of Sunday 15 July 2018) torn apart by fires that residents have described as an “inferno” – and that the Police have now confirmed they are treating as an arson attack.

Residents of Lake Terrace – just off Moor Road in Hunslet, next to Middleton Railway – were woken just before 2.30am by the sound of crashes and explosions in the Jewson builders yard immediately across the road from their terraced houses. They were confronted by billowing smoke, and the sight of flames tearing through three of the four buildings, and the yard itself – just 20m from their homes. Explosions were spewing bricks, glass, and sparks across the road and into their gardens.

As we reported earlier this morning, over 100 firefighters in 15+ fire engines attended from across the region, as well as the Police – and about 40 residents from 16 homes were evacuated to the nearby Hunslet Lake park until past 5am. Happily, no-one was seriously injured – although, to give a sense of the heat, the fire did kill off all the fish in one of the resident’s garden ponds.

“It was like bombs going off – then when you went into the street, it was raging like an inferno, burning your face. But we ran up and down the street, banging on everyone’s doors. The fire brigade seemed to take ages to arrive – then when they did come, it was mayhem with people everywhere. I appreciate they had to focus on the fire – but we were just stranded in the park, stuck with nothing and no support in the cold. It was horrible.”

The fires have continued to smoulder and even flare up throughout the day, and the Fire Service remain in action this evening. The air still carries a thick acrid smell, the residents’ gardens are visibly layered with ash and junk – and even inside many of their homes, rooms carry a coating of soot. The fire also spread to neighbouring Middleton Railway, where they have experienced significant losses amounting to at least £25,000.

The Police have confirmed they are treating the fire as an arson attack, with evidence of four separate fires having been lit – and they are investigating accordingly. Meanwhile, despite the carnage, Jewson – who employ 15 staff on the site – tonight confirmed that they plan to continue trading almost immediately, in conjunction with their Gibraltar Road depot (just off Low Road, the other side of Hunslet).

“This has been a long time coming. People have been breaking into Jewson for years, creating trouble, sometimes threatening local people. We were lucky in the end, but the fire could have easily spread to our houses. Something needs to be done to stop this happening again.”

With news of other fires elsewhere in the city today (including a grassland fire in Killingbeck, also allegedly the result of arson) and plenty more dry weather forecast, residents are being exhorted to act responsibly – with arson regularly carrying prison sentences up to 10 years. Or if you see or suspect a fire, report it as soon as possible to the emergency services on 999.