A significant amount of Yorkshire stone pavement has been stolen from Beeston in broad daylight over a period of 2 days last week and Monday this week (15-18 January 2016).

Residents on Tunstall Road initially thought the disappearance of the flagstones was connected to some work being undertaken by Yorkshire Water, but after a further large section of pavement was ripped out during the daytime on Friday 15 January Yorkshire Water confirmed that it was not them who had taken the blocks. The gang returned on Monday 18 January and removed a further large amount of stone from Rawson Terrace, again in broad daylight. 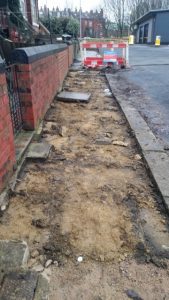 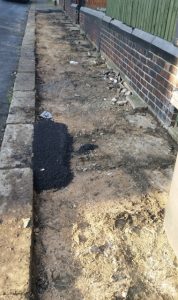 The council has stated that this type of crime is occurring with increasing frequency due to the value of the flagstones, and that gangs sometimes wear high vis jackets to make it look as though they’re permitted to be removing the stones. There have also been several incidents across Leeds of manhole covers being stolen in similar incidents. The Council state they will be replacing the pavements as soon as possible but there may be some delay as they are still very busy with the aftermath of the boxing day floods.

Anyone who has information should call 101 or email innersouth@westyorkshire.pnn.police.uk and quote crime reference number 13160022133.

Anyone who witnesses a crime occurring should call the police on 999.