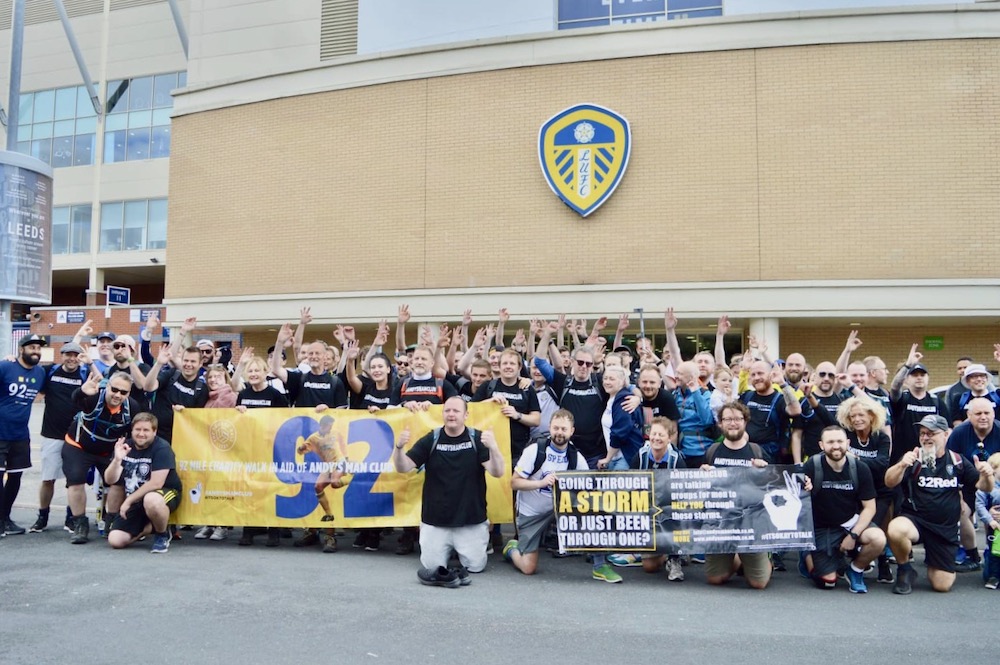 Organised by Leeds United fanzine ‘The Square Ball’, the walk started in North Wales from the playing field where Gary Speed first started playing football. The walk then headed via Warrington, Oldham and Huddersfield to Leeds. 92 miles in total to match the year Leeds won the league.

Growing up in the shadow of Elland Road on the Heaths, my affinity with the club started at an early age, and Gary Speed was part of the team that piqued my interest in football as a six year old. Gary’s passing is something we all struggle to come to terms with, so when the 10th anniversary came around in November, we decided it was an occasion we shouldn’t leave unmarked. The end of this season seemed a perfect time to celebrate his life as it coincided with the 30 year anniversary of the title win Gary contributed so much to. Whether in his usual midfield role, filling in at left-back or up front in place of Lee Chapman, Gary was brilliant at all of it. He was talented, handsome and loved by thousands. If mental health can be an issue for someone as brilliant as that then it’s an issue for all of us.

I was asked a few times before I did the walk, “why are you doing this?” and at first it was simply a personal challenge. Previously I had taken part in a 35 mile walk with the same group of people and the sense of achievement that gave me meant I could not turn down the opportunity to do something on a larger scale so when I was asked if I wanted to do a walk again, with no details of distance or where to, I said yes. Looking back, I am delighted that I took part in such an amazing journey, but the reason evolved as the walk progressed from a personal challenge to being part of something greater, to knowing we were supporting two amazing causes that make a huge difference to people’s lives. It wasn’t just about the money raised we were also creating awareness of Andy’s Man Club from what we were doing. By making people aware it exists and getting people through the doors that need that help, and as a consequence hopefully reducing the amount of men that tragically take their own lives.

Andy’s Man Club was formed out of the tragic suicide of Andy Roberts who was loving and doting father, son, brother, grandson, nephew, cousin and friend. Sadly and tragically without any warning Andrew, at 23 years old, was taken away from all his family and friends by suicide. On average one man every 2 hours takes his life in the UK. It’s often said a factor is that men don’t talk. That is why the club was born to break down these stigmas, support men struggling with Mental Health issues and lend a hand to suicide prevention. At Andy’s Man Club you don’t have to be suicidal.

The camaraderie and bonds that formed from trudging up the Pennines, down A roads and a strange affinity for the Status Quo song Rockin All Over the World were great personal positives to take from taking part. But the longer the walk went on and as the amount donated grew, the personal messages from Andy’s Man Club letting us know how much of a difference that money can make to them was extremely humbling and really hit home to me how much of a positive impact that could have for others.

A near constant throughout the walk was the chat about the condition of people’s feet. The WhatsApp group that was formed to organise the general locations, timings etc soon became jam packed with the deteriorating feet of those taking part, with many blisters, little toes that resembled something more akin to a horror film and feet bandaged to the point of reminding one of a comedic mummy. The endurance and determination of those that carried those injuries through 92 miles of walking were a sight to behold with some people on their feet and walking for 12 hours a day.

But I speak on behalf of everyone when I say the most important thing everyone wants to see from completing the walk, is getting the message out there, it’s okay to talk.