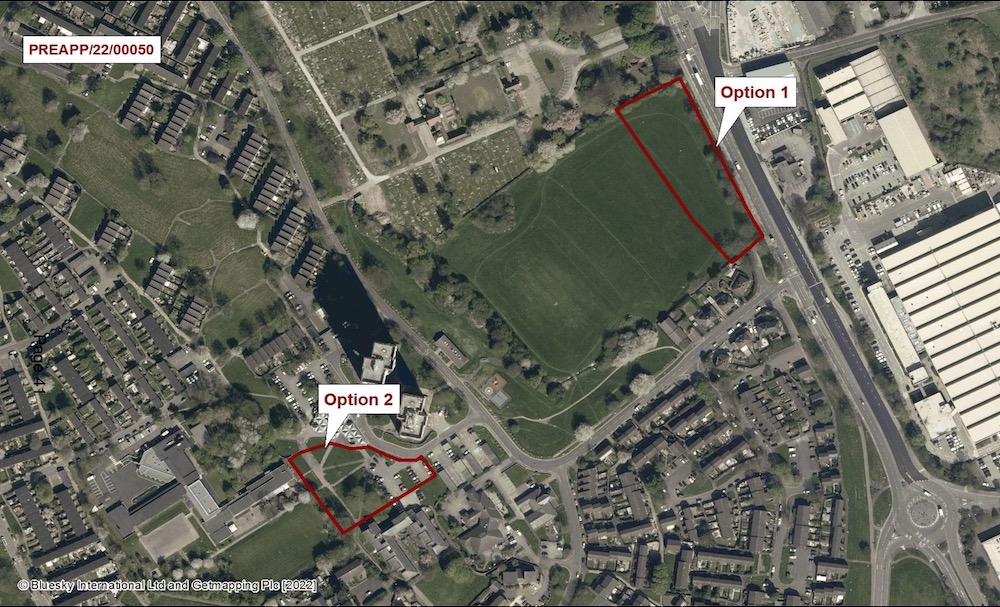 Councillors on the South & West Plans Panel will discuss two options for a new GP Surgery and Health Centre to serve the Cottingley Hall estate, when they meet on Thursday (7 July 2022).

The current surgery does not meet current NHS guidelines, having no space for interview and staff rooms, storage space and poor disabled access. The surgery was to relocate to the planned Park Life football facility at Fullerton Park on Elland Road, but this facility is now to be developed on the site of the former Matthew Murray High School in Holbeck.

Two sites have been identified for an expanded surgery that will also include a pharmacy, café, community health services and hospital outpatient clinics.

Fuller and Forbes Healthcare Group who took over the Cottingley Surgery a few years ago are keen to progress Option 1, which would use land close to the A6110 Ring Road between Cottingley Approach and the Crematorium. This land is green space and formerly included two football pitches, but these have not been used for the last ten years. The proposals for this site include a new football pitch and multi-use games area (MUGA).

A second option will also be considered which uses part of the car park between the shops and Dulverton Court sheltered housing, this is the site of the former pub which was demolished in 2011.

Councillors Scopes and Maloney (Labour, Beeston & Holbeck) are quoted in the report as favouring Option 2 as it would retain the Pharmacy in the heart of the estate, especially as it currently also provides a Post Office service. They also feel Option 1 would be less accessible to estate residents as it lies at the bottom of a steep hill.

Councillors will discuss the two options as part of a pre-application and be asked to comment specifically on:

You can read the full report to the Panel here.

One Reply to “Two options proposed for new Cottingley surgery”