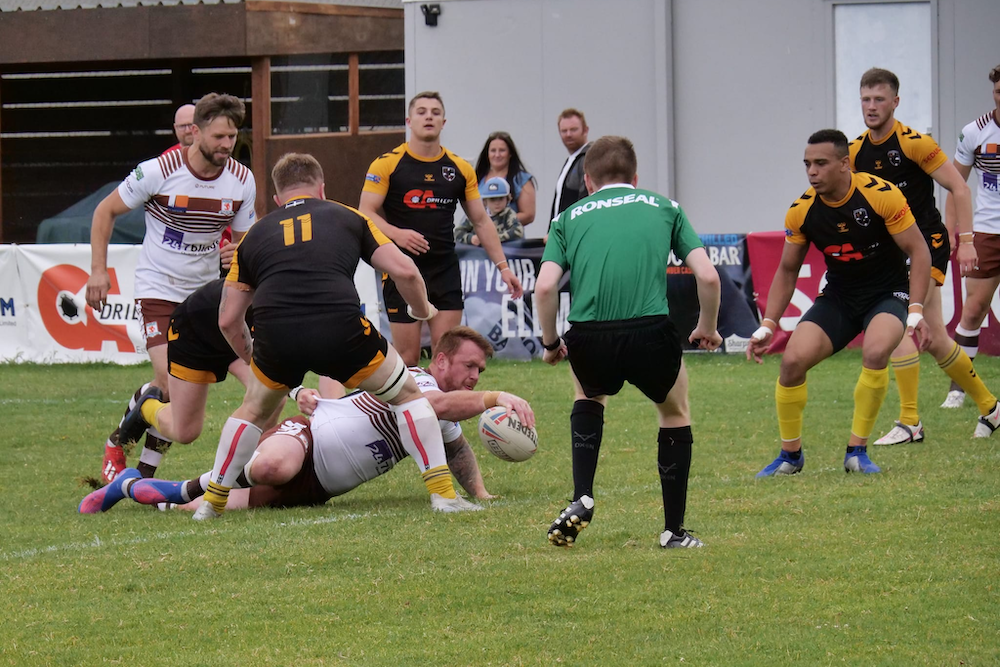 Hunslet negotiated a tricky away fixture at new club Cornwall’s home in Penryn on Saturday (2 July 2022). The Choughs gave the Parksiders a scare early on, but thanks to a Macauley Hallett hattrick Hunslet pulled through to take the spoils.

The 750 mile round trip was worth it in the end as the South Leeds club got back to winning ways, and now hope to put a run together in a push to secure a play-off place.

Early on though it was a travel weary Hunslet on the Cornish coast, as fumbles from kicks, mix-up’s in the defence and forced passes let former Hunslet player Aaron Jones-Bishop in under the sticks for a simple try. 6-0

Although both Pat Walker and Jack Render rescued Hunslet from threatening kicks it was another former Parksider in Tommy Ashton who dodged a tackle to score out on the left giving Cornwall a 12-0 lead after only 19 minutes play.

On the quarter mark Hunslet regained a bit of composure and possession and eventually, after good handling, Macauley Hallett was too strong for the Cornish defence. 12-6

Joy was coming down the left side and on 33 minutes Hallett again notched a try after good work by Jimmy Watson and Matty Stableford. Pat Walker was accurate for the conversion and it was Hunslet ending the half the stronger. 12-12.

It looked to be heading for all square at the break, but in the dying seconds Harvey Hallas scored a try when he had no right to. It’s typical of Hallas’s strong running this year marking him out as an early Player of the Season contender. 12-18

948 people were in attendance and the Cornish locals have taken the team to their hearts. The Choughs chalked up their first win last week against bottom club West Wales and were hoping to take a bigger scalp in Hunslet.

On 45 minutes Cornwall won a penalty and in the ensuing play Liam Whitton (a player who had asked for a trial) scored and we were back all square at 18-18.

But Hunslet gradually got on top. Cam Berry came on and the Parksiders began to look more lively. Great play from Berry, Whiteley and Walker got the ball out to Macauley Hallett who finished off his hattrick. 18-24

Next up was Josh Jordan-Roberts, who looked to be held up with three tacklers around him, but still managed to wrestle free and score. 18-30 and the Cornish resistance was fading.

A good number of Hunslet supporters had travelled to the South West and were given a treat when a busy Jordan Paga made ground before Pat Walker sent out a lovely ball for Jack Render to stroll over again on the left hand side. 18-36

Walker hadn’t missed a goal and it looked like Hunslet would rack up more points, especially when Hallett again broke free, but the tackle of the match halted him in his tracks.

Jordan Paga was unlucky from a Jordan Syme kick and ran out of steam running uphill after intercepting near his own line, but it was a Cornish interception of nearly 90 yards by fan favourite Harry Aaronson that finished off the match. 24-36

The score was about right, Hunslet deserved the win but Cornwall are improving week on week. Joseph Hird was tireless for Hunslet and was voted Hunslet Parkside Ex-players Association Man of the Match by his fellow players, and Jimmy Watson at full back was at his very best.

As well as the scorers ex-Hunslet men Charlie Bodman and Jack Ray had good games for the Choughs. Next up for Hunslet is West Wales Raiders this Sunday (10 July) 3pm at the South Leeds Stadium.