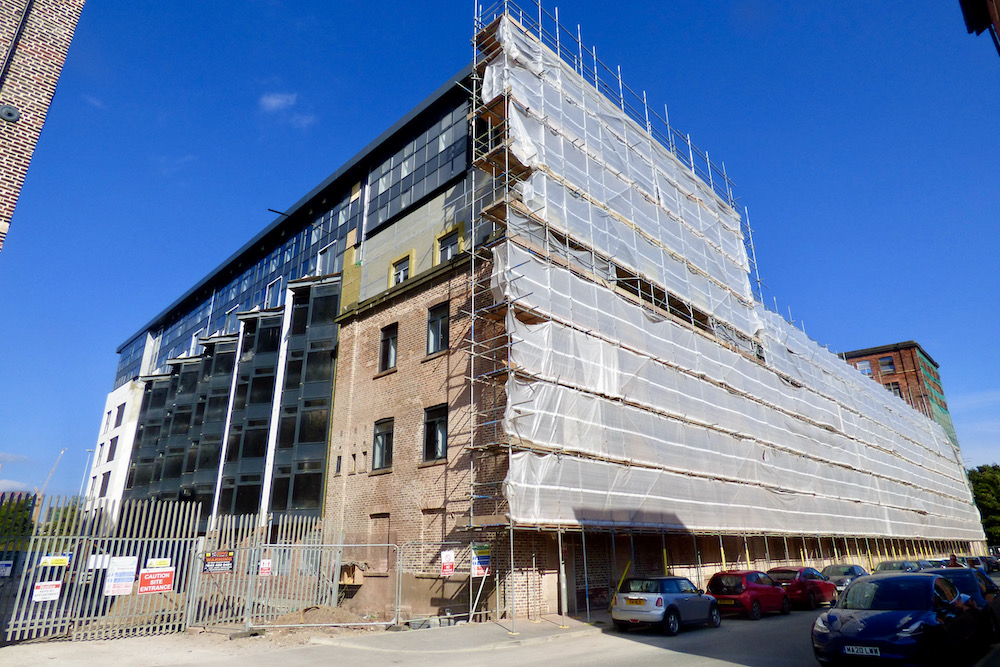 Hunslet residents are calling out a local property developer and their building contractors, working on a major £50m redevelopment project – for “irresponsible and inconsiderate” working practices, and also separately for “deviously playing the planning system”, “duping locals, for a quick buck”. The developers – JM Construction – deny all the allegations.

Hunslet Mill and Victoria Works are epic early Victorian mills facing onto the Aire and Calder Navigation, just along from Leeds Dock. They are Grade II and Grade II* listed buildings of regional significance, but lay empty and derelict from the 1970s onwards.

Residents, historians and architectural bodies feared they would be lost – but were relieved when in 2017, owners JM Construction obtained planning permission to convert them into 350 flats, to be known as Victoria Riverside.

However, local residents – especially on the next-door H2010 housing estate – argue that the story has since turned sour.

Since building work started in 2018, they have reported a litany of problems. These include: late night noise, with contractors occasionally working all night on heavy machinery tasks such as ‘power floating’ (smoothing new concrete floors); failure to suppress dust, leading to thick dust clouds frequently covering the estate; rubble and construction materials falling into the street and onto parked cars; and ongoing battles with contractors over littering and anti-social parking around the neighbourhood.

Locals describe the situation as “dismal”; one told us “it’s become a nightmare living here”. Furthermore, some residents – themselves builders – also claim to have witnessed lax health and safety regulations on the site. Many residents have contacted the contractors with feedback and queries – but say they have had limited response, and even aggression. One told us:

“The lack of communication is so disappointing: if they’d built up relationship with us, we could have easily avoided many of these issues.”

The Council’s environmental health team, and West Yorkshire Police have also been involved on occasion – but have expressed satisfaction that the contractors haven’t breached their management plan nor regulations. The contractors also stressed that they have regular contact with the Health and Safety Executive (HSE) government agency, and are fully compliant.

Separately, residents are also incensed that JM Construction have applied to Leeds Planning Department to scrap a proposed shop unit within the development, and replace it with further flats. Residents had originally welcomed this feature as an “incredibly important community asset” for an area which will soon have over 650 households, but which currently has no food shops within half a mile.

In comments made to us, and others submitted to the Planning Department, residents expressed dismay that the proposed amenity was at risk, repeatedly alleging that the developer is doing so simply in pursuit of profit.

They argue that a shop will help build a stronger local community, and reduce car use and air pollution – and also help fulfil the city’s response to the Climate Emergency.

One resident described events as a common “bait-and-switch” tactic, where people are enticed to buy or rent properties, with promises of amenities that are never fulfilled. Noting that Miller Homes did exactly the same when building H2010, another bemoaned that it was established practice amongst developers. Another commented:

“Please don’t allow them to walk all over us, profit from our neighbourhood, and ruin it instead of enhancing it.”

And other stakeholders have thrown their weight behind the objections. Cllr Paul Wray (Hunslet & Riverside) told us:

“We do not accept the developers argument of there being no demand for a general convenience retailer in the area. They seem to be placing making a quicker profit before the needs of the community, and we strongly feel they could do more to attract a retailer. We will make our case at plans panel if need be, and fight to support our community’s case”.

“We are keen to ensure that all developments are sustainable, providing amenities within easy reach. It is important that each scheme plays its part in creating a range of community facilities for those who live and work nearby”.

A spokesperson for JM Construction told us:

“We’re a long-established local company, very community-based in our thinking – but you simply can’t do a development on this scale without disruption. We pride ourselves on running sites that are as clean and safe as possible, taking every possible precaution, and trying to cause minimal inconvenience and disruption to residents. And on the proposed change to planning, we’ve gone out and actively sought a retail partner over two years, and had absolutely no interest. What’s the better option: leave it derelict?”

Specifically, they also stressed that they had had permission for the late-night power floating – and that they have actually now changed their flooring process, at considerable expense, so that all-night work will not be repeated. They also stated that they always instruct staff and sub-contractors to park within the site, where there was sufficient capacity for everyone – and that they would reiterate that.

For more details on the Victoria Riverside development, or to contact JM Construction, visit: jmconstruction.co.uk. The project is due for completion in 2023/24, but residents have already moved into some blocks.

14 Replies to “Trouble at mill”