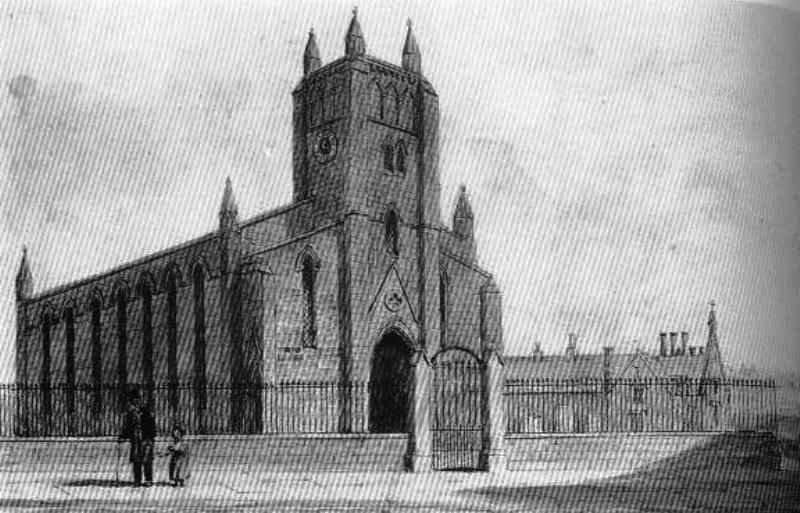 Our story starts with an earlier chapel which stood on the corner of Towngate (St Matthew’s Street) and Stocks Hill.

The old Chapel dedicated to St Catherine, which is noted in ancient documents as being built between the years 1079 and 1179, and was rebuilt on the same site in the 17th Century. This ancient Chapel was mentioned in a Bull granted by the Pope to Ralph Paganell who lived at the time of William the Conqueror and was given by the same Ralph Paganell in 1089 to the Priory of the Holy Trinity at York.

No pictorial evidence has been found of this church, but Whitaker the historian describes it as, ‘a dark mean edifice’, so we can safely assume it was not an architectural masterpiece. It was used for Sunday School after St Matthew’s had been built and the old village stocks were stored under the altar. The old village stock used to stand on the corner of Stocks Hill, hence the street name commemorating this.

The old church was known as the Chapel of St Catherine’s, but the locals named it the Bell Chapel. It would have been here, that the Holbeck Choir made history in 1767 when on Christmas Day part of Handel’s Messiah was performed. This would appear to be the first performance of this piece of music in Leeds.

It was also to this place of worship that Ralph Thoresby used to wander down Water Lane to visit his friend the Reverend Dennison. If you consult an old map of the area, you will find the street we now call Bridge Street just across from Stocks Hill used to be Dennison Road.

It was on a map by Fowler of Leeds in 1831 that I first found a documented evidence of St Catherine’s. The St Catherine’s Chapel and St. Matthew’s new church are shown on the map and listed in the index. The date over the door of St. Catherine’s was 1632 and the date on the gallery was 1646 but the records shown that in 1624 there was great excitement in the area due to the building of the new church; this was St. Catherine’s Church.

With the increase in the population caused by the influx of migrants brought in to work in the local textile mills and engineering works in the early part of the 19th century in Holbeck, the old church and churchyard, which was about 1⅔ acres was found to be fast becoming inadequate so a new church was required along with a larger churchyard.

In 1819 the Vestry met to discuss an extension to the churchyard but nothing came of this and in 1827 it was decided to replace the chapel and RD Chantrell was commissioned to design its replacement. The old church was demolished in 1836-37 and all the materials sold by order of the Archbishop’s Court.

The chapel stood at the bottom of the present graveyard, the memorial to Matthew Murray giving a clue to this. A man of such importance in the community, his grave would have had a prominent position in the old graveyard.

The Lady of the Manor, the Marchioness of Hertford, donated the site of the new church and an extended graveyard of about ⅓ of an acre.

The Foundation Stone was laid on 5 August 1829 and the church was consecrated on 4 January 1832. The architect was RD Chantrell, who later went on to design the Leeds Parish Church (now Minster).

It was built for the sum of £3,786 by the Parliamentary Commission and was a handsome structure in the early English style containing seating for 1,200 parishioners. Originally it was to have had a spire but this was abandoned because of shortage of funds, but in the mid-19th Century the present spire — rather more elaborate than that intended by Chantrell — was added. The Perpetual Curacy was valued at £70 and was in the patronage of the Vicar of Leeds.

Known locally as Holbeck Church, St Matthew’s was one of the ‘million’ churches (another in the area being Christ Church on Meadow Lane, now demolished). In 1815, the Tory Parliament voted £1 million towards setting up new churches in manufacturing areas where the population was rapidly increasing; Holbeck was awarded £3,400 of this grant.

However, there were problems almost from the outset. The church suffered through the lack of a good Priest and it wasn’t until 1855 that a new man, John Hutton Fisher Kendall (1815-1879), turned the fortunes of St. Matthews. A new spire was erected in 1860 and the church was completely refurbished, alterations paid for in the main by a local man John Naylor. The impressive stained glass is by RB Edmundson & Son of Manchester.

Holbeck in those days was known as a town. In 1833, the town school was just behind the Verger’s house in Towngate and was in need of repair. In 1834 an application was made to demolish the old church of St. Catherine’s, and build a new town school for children of all denominations, and in 1837 money was spent on the churchyard but it was to be six years before anything was done about the school.

The site was donated by Hugo Charles Meynell Ingram, the then Lord of the Manor. Once again the architect Chantrell was called upon to design the school. The new school originally contained two houses — one for the school master and one for the mistress.

Holbeck was included in the Home Office’s list of proposed burial closures in 1854. The Vestry tried to persuade the Home Secretary that the churchyard was not full and presented no hazard to the public, they also claimed that the churchyard contained 12 acres, but this it is suspected must have included Holbeck Moor to obtain this figure (there is no record of any consecration of burial ground since 1832).

The Home Secretary was not convinced and ordered the closure of the churchyard, there was an Order in Council dated 7 December 1855 which ordered the closure on 1 April 1856 but, protest was delay this by about 15 months. However, the delay in providing its replacement, Holbeck Cemetery, meant that the churchyard remained open until July 1857 (Holbeck Cemetery, named because it was the cemetery for Holbeck, not in Holbeck, opened on 1 July 1857).

The churchyard is now an open space dominated by the iron obelisk erected in memory of Matthew Murray of the Round Foundry by his workers, he is buried in the vault below.

The church would stand almost unaltered until 1964 when a serious fire damaged the fabric of the building. The community was quick to rally to the aid of the church and a fund was set up to restore the building to its former glory.

Slum clearance and redevelopments from the 1930s combined with the decrease in churchgoing resulted in the closure of St Matthew’s, the last service being held on Sunday 1 August 1976. It re-opened in July 1982 as a Community Centre for the people of Holbeck.

The Registers before 1812 have been transcribed by the Thoresby Society and these, and those after 1812, are deposited with the West Yorkshire Archive Service.

6 Replies to “The history of St Matthew’s church, Holbeck”