I was lucky enough to be offered the opportunity by South Leeds Life to see The Grapes of Wrath performed at the West Yorkshire Playhouse last Wednesday (24 May 2017).

The play is based on the novel by John Steinbeck and focusses on the Joad family who are forced to leave their barren, dusty farm in Oklahoma and head west with thousands of other families chasing the promise of work and a wonderful new life. It is adapted for the stage by Frank Galati and directed by Abbey Wright. 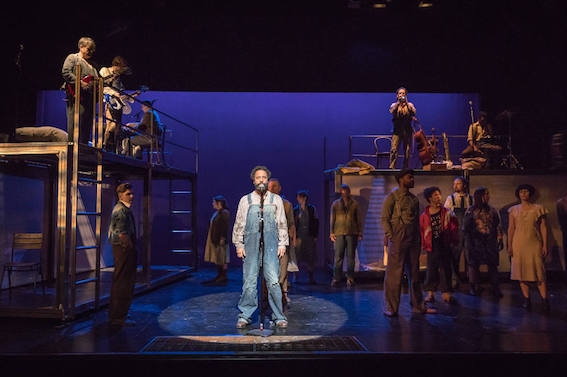 When the play opens we are introduced to the ex-preacher Casy and Tom Joad who has just been released from prison and is in happy anticipation of seeing his family again. Unfortunately nothing is the same as Tom left it and his family (with the preacher tagging along) are about to embark on an epic journey in search of work, food and happiness. I felt that the story very much resonates with today and the plight of refugees, forced to leave their homes through no fault of their own.

Throughout their journey the family face many trials – they do not have the money to bury a family member, they are unable to legally camp by roadsides and are forced to pay inflated prices to stay in campsites by unscrupulous landowners as well as being discriminated against by polite society.

I came to feel very invested in the fortunes of the family and Julia Swift gave a marvellous performance as Ma, the matriarch who keeps the family bound together and is ever hopeful that the future may bring better times for her beloved family.

By the time the interval came around there was a hope that the family would endure but slightly more than a sneaking suspicion that this was not going to be a story with a happy ending.

Musical interludes were scattered throughout the performance and showcased the multi-talented actors, who not only played multiple characters also sang and performed various instruments. A particularly stand-out piece for me was as the family joined a huge camp for migrants and experienced a brief respite from their tribulations by singing and dancing with other migrating families. Speaking to a member of the chorus after the show she revealed that the director had visited the migrant camps in Calais and witnessed scenes of singing and dancing that had struck her as a spark of human joy in a camp full of displaced people. The fact that the inspiration for this scene is contemporary is shocking when you bear in mind that the novel was published in 1939.

The story is a harrowing one and the final scene is particularly shocking but completely sums up the ethos of the Joad family which is to give to others even when you have so little to give. Unfortunately society does not treat the family with equal compassion.

This was a fantastic production and incredibly thought-provoking – if you get the chance to see it I would thoroughly recommend that you do.

Find out more about the South Leeds Goes To The Playhouse project.

This post was written by Hazel Millichamp using our Create an article for South Leeds Life page.