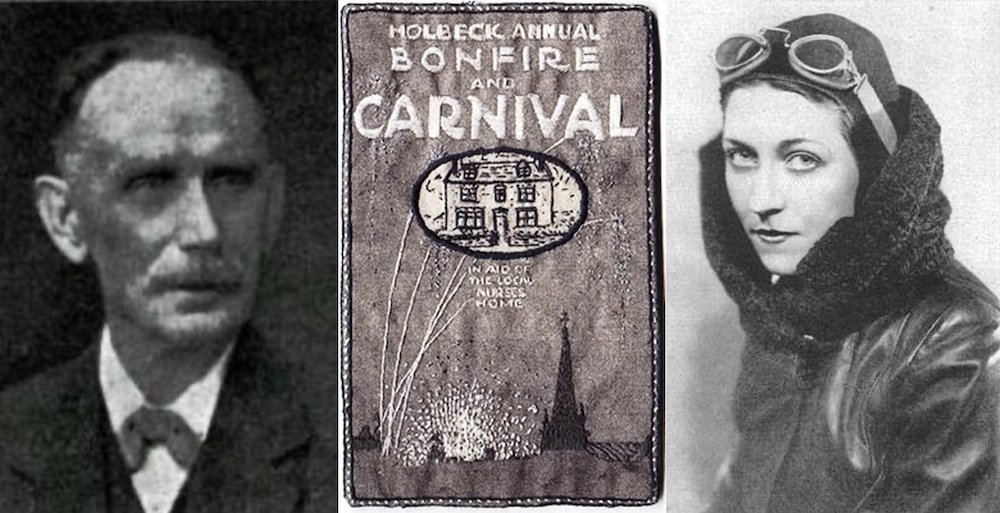 When peace and victory celebrations were being arranged after the 1914-18 war it was proposed to hold a bonfire and fireworks display in Cross Flatts Park as well as Woodhouse Moor.

However, some Holbeck men were talking together and one suggested holding their own bonfire and firework display on Holbeck Moor. It was about this time that a Mr Armitage picked up a ‘Tanner’, (sixpenny) coin (2½p) at the entrance to a local hostelry, the Cricketers Arms. On entering he put it in his cap saying “Reight lads, this’ll start the collection for t’fire, an if they wear’nt let’s have it we’ll gi brass ta Nurses Home.”

The first collection realised over 17 shillings (85p), the idea caught on and other public houses in the local area took up their own collections. But time was short, and it required an almost superhuman effort to get the arrangements made in time.

Mr Middleton of the Cricketers Arms and Mr Blaydes of the Duke of William were destined to devoting all of their time in completing the arrangements. In this task they were ably assisted by Mr Atkinson, Mr Roberts, Mr Littlewood and others who worked early and late to make the effort hugely successful.

It was decided that the bonfire should be lit by a Holbeck man and there was no person more fitting of this description than the Lord Mayor, Joseph Henry, known for many years as the ‘Uncrowned King of Holbeck’ and greatly respected by Holbeck residents. It was a huge success and the Nurses Home gratefully received the sum of £90.

The following year (1920) the event took on a more definite shape, a carnival and a bonfire being held. The fire was once again lit by the Lord Mayor, this time it was Thomas Beveridge Duncan, who was the first Labour Lord Mayor of Leeds (1919-1920). Once again it was very successful with a large crowd in attendance with the sum of £130 being raised, but some reports say that given the size of the crowd it aught to have been more.

For the Procession and Carnival there were decorated floats, brass bands, and fancy dress competitions for both children and adults it was all so colourful and very noisy. The Procession began at two in the afternoon and the route taken was via Holbeck Moor, Meadow Road, Sweet Street West, Holbeck Lane, Domestic Street, Balm Walk, Ninevah Road, Victory Street, Meynall Street, Towngate, Shafton Lane, Crosby Road, Elland Road, Top Moor Side, and back to Holbeck Moor. This was followed by the Gala at seven with the bonfire being officially lit at half past nine in the evening.

Unfortunately, in 1921 the event had to be abandoned owing to a miner’s dispute. The next show, however, was even more successful the ‘tanner’ had already raised £200 and it was hoped that another £200 would be raised again by this show.

One year the bonfire was made up of over 100 pianos, local businesses having agreed to throw out their old pianos, this made a massive blaze and when the fire got really going the heat was terrific because the flames were so intense. The Moor was cordoned off and jam-packed with people from all over, some coming from miles around to join in the fun and festivities.

Another show was opened by the famous aviatrix Amy Johnson who came from Hull to light the bonfire. Amy was born in Hull in 1903 and lived there until 1923 when she attended University in Sheffield. Her interest in flying began in the winter of 1928-29 and after flying solo her next achievement was to train as a Ground Engineer and at the time she was the only woman in the world to be so trained.

Early in 1930 Amy decided she would like to fly solo to Australia, she convinced her father and Lord Wakefield to put up £600 to buy a de Havilland Gypsy Moth, G-AAAH, which she named ‘Jason’. Amy left Croydon on 5 May 1930 and landed in Darwin, Australia on 24 May after a flight of 11,000 miles.

She was the first woman to fly alone and she came home to a heroes welcome and a CBE. Amy died in 1941 on active service while ferrying an aircraft with the Air Transport Auxiliary in mysterious circumstances. The people of Holbeck were thrilled to have such a celebrity to open their celebrations, and everything went off brilliantly.

All this lasted until the outbreak of the Second World War in 1939 this causing all such entertainments to be cancelled for the duration. Most of these events never seem to have restarted once peace was declared apart from the VE and VJ celebrations.

The only acknowledgement that these shows happened can be found on the Leeds Tapestry in the Central Library.

Image shows Joseph Henry ‘The Uncrowned King of Holbeck’; The panel on the Leeds Tapestry at the Central Library; and Amy Johnson