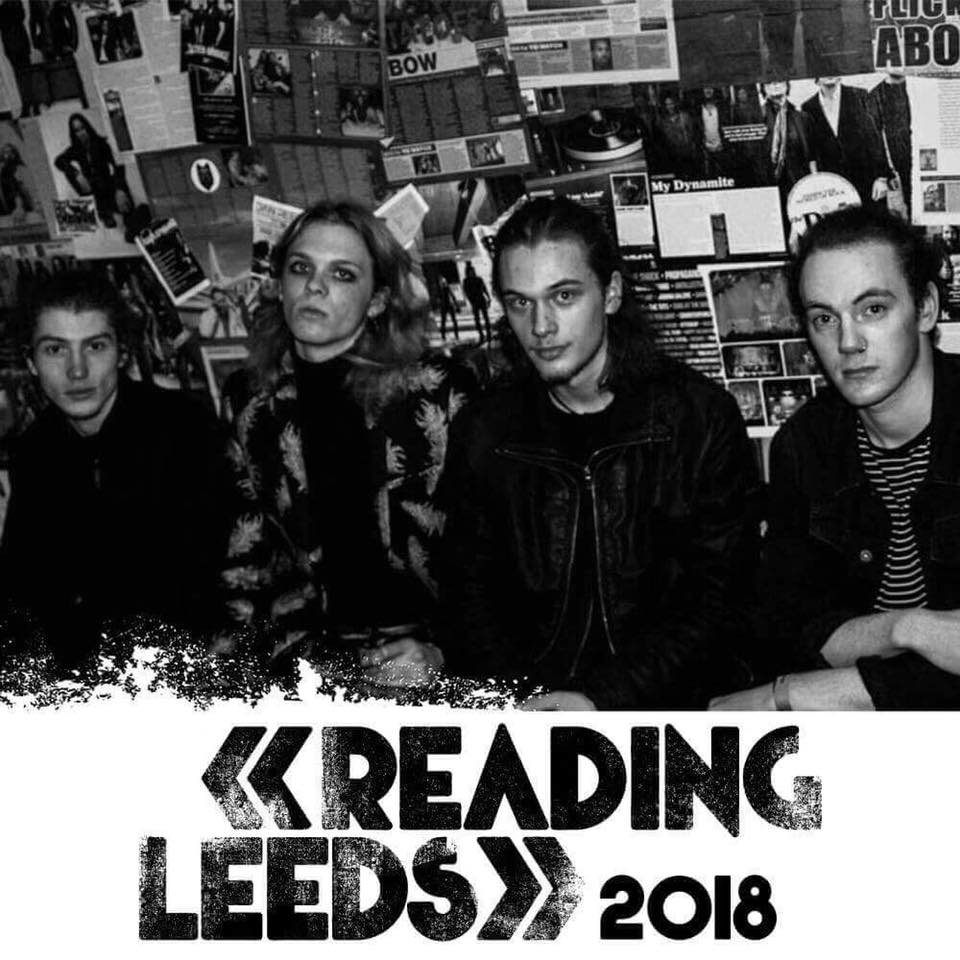 This coming weekend sees ‘Sounds Like A Storm’ – a young indie band, with their roots very firmly in south Leeds – going up a gear, performing to thousands at the major Leeds and Reading Festival. South Leeds Life caught up with them at Old Chapel Studios in Holbeck, to find out what’s going on.

Sounds Like A Storm are, in case I didn’t mention it, young. In their review of the band, Indie Music Central described them as ‘the youngsters redefining the rules on age’. They are: Cormac Connolly (18, lead guitar, from Beeston), Sennen Ludman (18, vocals and rhythm guitar, from Hunslet), Connor ‘Cornish’ Passey (18, bass, from Middleton), and Joe Schofield (the ripe old age of 19, drums, from Farnley).

Young they might be – but so too they come across as confident, engaging, characterful. There’s plenty of laughter and banter, and a shared passion for both the music and the music scene itself. And also – I sense – a clear-eyed focus on the goal, a tough-minded determination to break through and go places together.

Three of them (minus Joe at that point) started out together in their mid teens at Cockburn high school, entering competitions and gigging where they could. Their first break-through was winning the Leeds AMP Awards, featuring a performance at the O2 Academy, in 2016. Joe joined them at that point, and – I’m told – “put fuel on the fire”.

The past year has seen them touring across the country, performing in front of 200-300 crowds, sometimes headlining, and plugging away with local events including the ‘Live at Leeds’ festival. Sennen – the classic talkative frontman – says it’s been great to see and feel momentum building:

“This is everything we’ve worked for these past years. We’re grateful, but we’re not surprised. We’ve put in the hours, the graft. We’re not going to stop – then who knows what the next ten years is going to do?”

The next week at least holds a major new step. Earlier this month, they won a Futuresound competition for emerging artists – and with it slots on the Radio 1 stage at Leeds and Reading Festivals, this Bank Holiday weekend. They’re up at 12pm midday Friday in Reading, then 12pm midday Saturday back here in Leeds – with crowds likely to be up to 5,000 people.

Then what does the future hold? They all chip in together, a weave of overlapping comments – and whilst they seem keen to playfully talk themselves down, they clearly have a plan and vision:

“We’re just a bunch of estate lads, doing this full-time, no jobs, all skint, just in it together… At the moment, we’ve got nothing: we’re not signed, we’ve no albums, nothing… It’s just us, off our own backs… But you don’t know what the future holds, and we’ll just keep going… We’re giving it everything, we’ll slowly build up, and let’s see where we get to…”

Also, for all their youthful bravado, they’re clearly very conscious of those around them – who have helped propel them this far. They give special mention to family, friends (“some people have really stuck by us”), Cockburn school (“some of the teachers still come and watch us perform”), and Old Chapel Studios (“we’d be nothing without them”).

And I ask them finally what they’d want to say to other local people. Sennan – without hesitation – comments:

“Whatever you want to do or be, there’s a better life out there. Start young. Dare to dream. Don’t be scared.”

In their 18 or 19 years, these four young lads have dreamt, and dared, and are making a life for themselves. It remains to be seen if they hit the big-time – but if there are prizes for grit and passion, they’re surely in the running.

Sounds Like A Storm are on Facebook, Twitter, and other social media. They’re performing on the Radio 1 stages at Reading Festival this Friday (24 August) at 12pm midday, then again at the Leeds Festival on Saturday (25 August) also at 12pm midday; click here for the Reading and Leeds Festival.