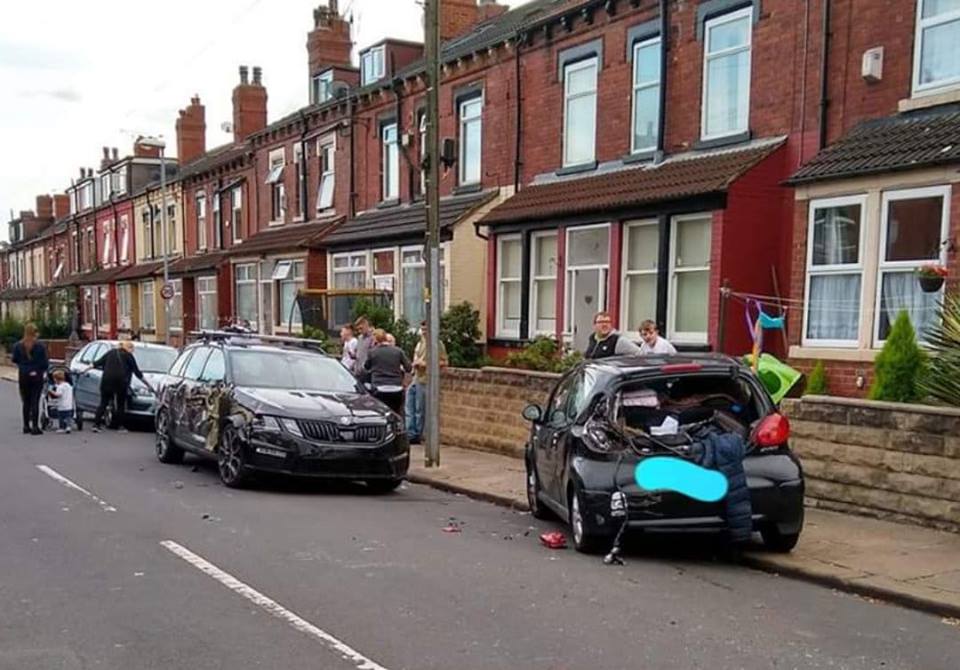 Streets in Upper Beeston were yesterday afternoon (Saturday 18 August) the scene of havoc and destruction, as a pick-up truck careered dangerously through residential streets, trashing cars as it went.

The truck first appeared on Cross Flatts Drive, coming off Beeston Road at an estimated 40-50 mph, at around 5.45pm. It proceeded down the normally quiet residential street, its hydraulic arm swinging wildly at its back, bashing and crashing into 5 or 6 cars as it went.

After the immediate shock, a number of residents ran out of their properties, and a chase ensued as the truck wove in and out of local streets. It is understood that other cars were damaged en route, before the truck eventually crashed into another series of cars then came to a halt on Grovehall Avenue, just off Barkly Road.

The driver – only reported at this stage as a bald middle-aged man – was then seen escaping the scene on foot, followed by police officers. Residents who first arrived on the scene report that the cab smelt strongly of alcohol, and that the driver appeared to have left his phone there.

Georgie lives on Cross Flatts Drive and came out of her house after she heard the commotion:

“It was mayhem, but it could have been a lot worse. The street is normally full of kids, playing and cycling about, so I guess we were lucky. But I feel sorry for my poor neighbours whose cars got smashed up – it’s not clear what if anything they’ll be able to do about insurance claims.”

It is understood that the police are investigating, and have leads on identifying the perpetrator. If residents have relevant information, they are encouraged to report it online (here), or call 101. It is unclear what the situation is regarding the insurance – or lack of it – of the vehicle and driver, but victims of yesterday’s events are encouraged to contact their insurers to pursue options.