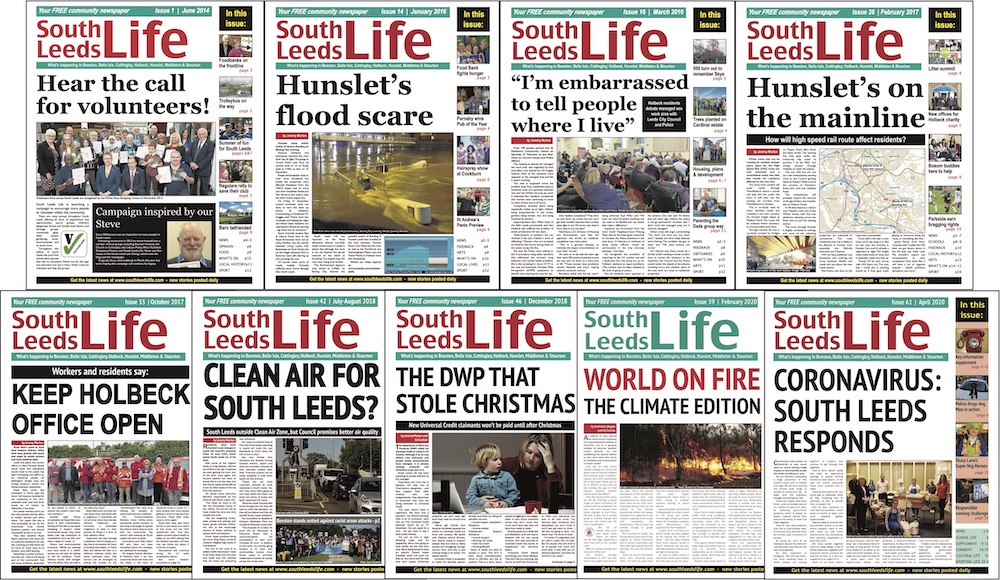 South Leeds Life started life after local journalist John Baron held a blogging workshop at Hillside in November 2010. There were about 8 or 10 of us around the table from a range of local community groups. At the end of the session we agreed to pool our forces on one blog rather than plough our lone furrows, hoping to build a bigger audience that way.

Some readers may be wondering what ‘blogging’ is. The word comes from web-log a sort of online diary. It was quite a big thing back then and genuinely opened up the opportunity to publish your writing to the wider world via the internet.

Two weeks after the workshop we reconvened with IT expert Dave Florence to create our blog. We threw around a few names around before settling on South Leeds Life. We looked at a few community news blogs from around the country and chose a free design on the WordPress platform.

We posted our first article, or blog post, on 30 November 2010, it was headlined This is South Leeds Calling. It’s still here on our website, as are all the articles we’ve published (although we’ve lost a lot of our photos over the years), just click on Archives link at the bottom of the page.

We set out the aims for South Leeds Life to:

We’ve refined them a little since then, but it’s not a bad summary of what we’ve tried to do over the last ten years.

Our readership grew very slowly to start with, but we got a boost when the Olympic Torch was carried through South Leeds in 2012. We had volunteers at half a dozen points along the route feeding in photos and crowd reactions.

One group out that morning was the campaign to save South Leeds Sports Centre. Their campaign, which achieved a partial reopening before a final closure and demolition, was one of a number of long running stories that South Leeds Life has covered over the last decade. Others include:

Along the way we have covered hundreds of community events big and small, highlighted fundraising campaigns and community champions.

Early on we had a sister print publication – a quarterly magazine produced by Health For All that we shared content with and then in 2014 we went into ourselves.

Our first newspaper, in June that year was a bit of a test run. It was just 12 pages, but we packed in a range of issues that we are still covering today: foodbanks, volunteering, new schools and shopping locally. Again, all our newspaper are archived on this website.

We launched a monthly paper six years ago in December 2014. To be honest we did it on a bit of a financial wing and a prayer. We had been given a grant (from the EU) to help us start and we eked it out by not paying the Editor. We pulled in a few adverts, but we only ever had enough money in the bank to produce the next one or two editions. Some months the Editor got paid, some months I didn’t.

Eventually we went to you, our readers, and explained the situation. We were taken aback by the response. We hadn’t realised quite how much you valued the newspaper and wanted to see it continue. We launched a sponsorship scheme for local organisations on the back of The Hunslet Club’s very generous offer to become our first Platinum sponsor. We also launched a subscription scheme for individual readers. It is this local support that has enabled us to keep in print – so thank you to everyone who has contributed.

Publishing news is a responsibility we have always taken seriously, if get it wrong you can easily end up in the courts. Up to this point we had operated as a fairly informal group, but on 10 February 2016 we were incorporated as South Leeds Life CIC (Community Interest Company) – a not-for-profit social enterprise and a proper legal entity.

We also joined the Independent Community News Network when it was set up by Cardiff University’s Centre For Community Journalism in 2018. The Network links over 100 similar news outlets across the UK, lobbies government on our behalf and provides access to legal advice. Then last year we joined the press regulator Impress, which gives you, our readers, an independent body to appeal to if you think we’ve got things wrong.

There’s a journalistic tradition of running April Fools stories that goes back to the The Guardian’s mythical island of San Seriffe and Panorama’s spaghetti trees. We like to think we’ve added a little to that tradition and brought a smile to a few faces. We’ve told you about swapping the LS10 and LS11 postcodes; the Millshaw separatists; and introducing a ten-term school year.

I’ll let you into a secret, I keep a list of names to use in these articles. When I come across a word or phrase that could be turned into a name I jot it down. I was listening to the radio when I came up with Dick Tate who appeared this year as an officious local government officer. Watch out for eco-warrior Hazel Catkins who I spotted as I was walking the dog one day.

And then there was 2020. When the first lockdown started in March we weren’t sure if there would be any news to print, but the world didn’t stop and we kept going day by day, month by month. We’ve carried public health information, reported on the volunteers keeping families fed, and given you ideas to keep active a busy.

We had to adapt our distribution as schools, doctors’ surgeries and community centres closed to the public. We linked up with the hubs distributing food parcels who kindly added a copy of the paper to those parcels. We made sure every care home and sheltered housing complex got a supply and we are grateful to Middleton Asda for letting us put one of our paper bins in their store.

These ten years have been quite a ride, brought to you by a host of volunteers. Here’s to another ten years of South Leeds Life.