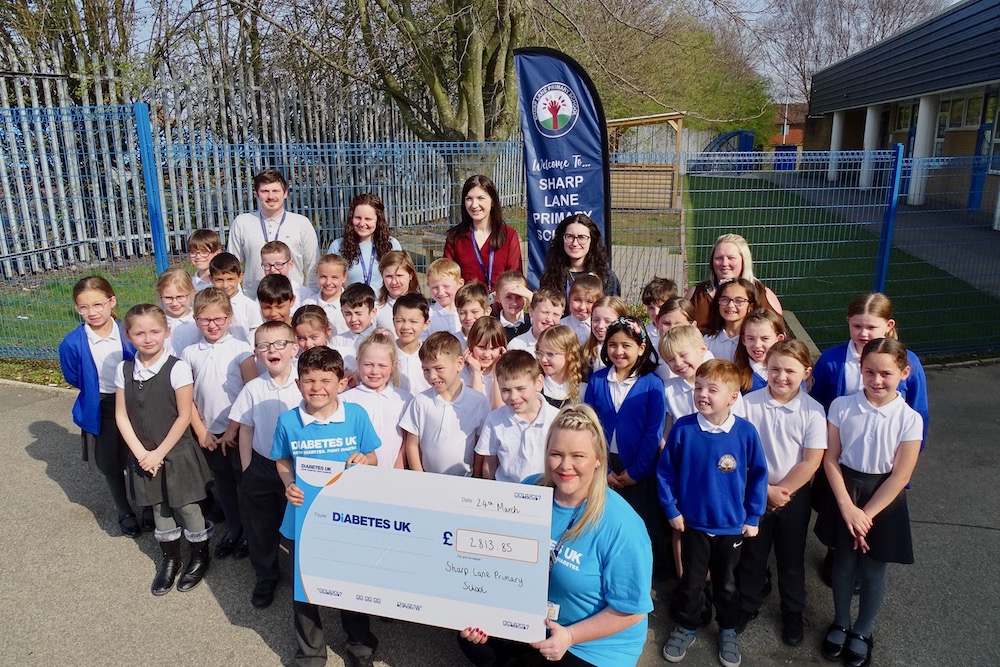 Children in Year 3 at Sharp Lane Primary School have raised almost £3,000 for Diabetes UK after learning that one of their number lives with the condition.

Ryly Dabill-Haigh was diagnosed with Type 1 Diabetes, an incurable condition in which the body attacks its own immune system, when he was five. With his body unable to make insulin, he has to make sure his blood sugar levels don’t get too high or too low. This involves having several injections each day.

“When I was five I had absolutely no idea what I had and was really scared, but at six I got a bit more confident, right now at age seven I feel really confident about it” he said.

Year 3 pupils learned about Diabetes with Ryly’s help and held a sponsored run to support Diabetes UK. Insulin was discovered 100 years ago and so the school targeted a combined total of 100 miles for the run, which they achieved raising a staggering £2,813.85.

“The fundraising made me feel really excited when we finished it because I thought we were going to get a cure because I don’t want diabetes any more” said Ryly.

I spoke to some of the pupils who told me about they know about the two types of diabetes, that its about the blood sugar levels, that it isn’t transmissible, that Ryly has to have injections, but it doesn’t stop him joining in all their activities. Ryly explained how this has helped him:

“If I tell them I’m shaky then they’ll tell a teacher to help me.”

He certainly doesn’t let his diabetes get in the way of being active and enjoys his football at The Hunslet Club where he’s recently made the Under 8s team.

“It was really impressive how kind they were and supportive towards Ryly. It’s changed a lot since I was a child, because I have Type 1 Diabetes myself, so it’s really encouraging to see the awareness grow and also the support.”

“I want to say a huge ‘thank you’ to all the children at Sharp Lane Primary School. It’s a massive amount of money and it will go a long way towards helping people who are affected by diabetes.”