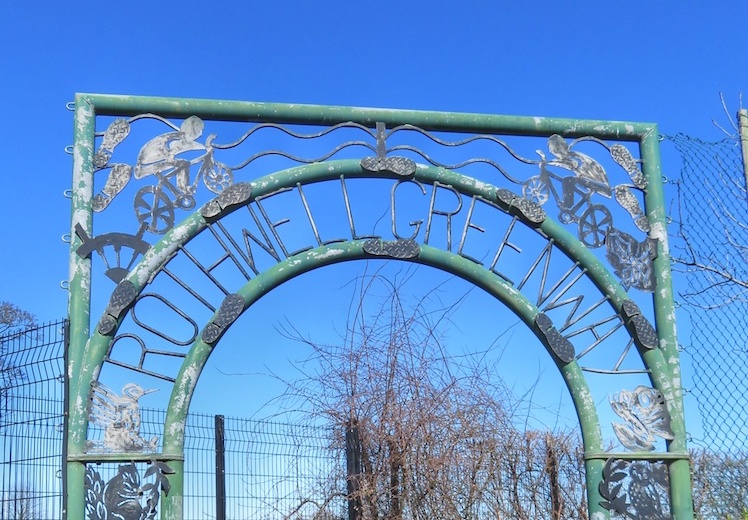 As we move from Spring to Summer, the best way to enjoy the weather is to get out and enjoy the outdoors whether that be in the form of a walk, run or bike ride. Here’s another suggestion from the South Leeds Lakers Running Club:

On the right hand side of Long Thorpe Lane, opposite Rodillian Academy school fields, a green iron archway adorned with ‘ROTHWELL GREENWAY’ marks the start of this route.

It follows a section of the old East & West Yorkshire Union Railway line that criss-crossed this part of Yorkshire in the late 19th and early 20th century. This particular branch line opened in 1891, with a short-lived passenger service eventually closing in 1904.

Measuring 2 miles, I use this path as part of a longer run – although it starts in Lofthouse (not technically South Leeds) the end of the line is Rothwell, very much part of Leeds and therefore eligible for inclusion in this series of articles.

Starting at the aforementioned archway, you set off down a trail path between houses and more school playing fields. After a short distance the route opens up to a wider grassed area. Narrowing again as you pass between the old embankments with The Gardener’s Arms on your right, (I shouldn’t imagine anyone would want (need) a drink after only running a relatively short distance) the path dips down as you venture under the old bridge with the traffic on the A61 thundering above you.

On the other side the path bears left then straightens out and through one of the many stiles you will encounter on this route, which I guess have been strategically placed to prevent motorbikes etc. This section is mainly covered by overhanging trees on either side, although occasional gaps in the tree line on your right reveal stunning views across the farmers’ fields to the village of Carlton. Further along are huge spoil heaps on the edge of the fields, a quite imposing sight when the early morning sun rises beyond them.

This path eventually drops down to the A654 Leadwell Lane where you will see the remains of the railway bridge that took the track over the main road. Cross the road and head between the houses, keeping the brown fence on your right. As you cross the next road (Hopefield Drive) and go through (or round) another green stile, you are off the tarmac and back on the trail.

Old maps show Robin Hood Station located somewhere here. It amazes me that architecture such as railway stations can disappear without trace; if you didn’t know about its existence you would be none the wiser.

From this point you will notice several offshoots to your route which were the other branch lines going off towards Stourton. Follow the path that bears right taking you at the back of the houses. The path will split again, stay right and follow on. Although it was difficult to envisage where Robin Hood Station had been, it’s now hard not to imagine this being a railway cutting 100+ years ago with the steep bankings in place on either side. You will pass the remains of Thompson’s Bridge as you progress; this bridge, amazingly, has only very recently been demolished as it had finally been deemed unsafe.

The steep embankments eventually disappear to reveal Manor Park fields to the left with houses beyond. Up to this point the path has been predominantly trail but here it briefly becomes tarmac. You don’t realise you’re as high up as you are until you take in the views across the pastures below on your right with Rothwell in the near distance. This was the approximate location of Rothwell Station ‘back in the day’ but again, you wouldn’t know.

The path narrows at this point and weaves through the trees before opening up onto a gravel road which will leads onto Wood Lane opposite the top side of Holy Trinity Church and the end of the route.

The more adventurous of you may wish to turn left up the long gradual incline that is Wood Lane to eventually re-join the A61 at the jawbones. Turning right and going down the hill will bring you into the centre of Rothwell.

You will be exposed to the full range of the British weather on this route as there is not much shelter from the elements. My last two runs down here saw me first splashing through puddles and thick mud in torrential rain, the second time was in blazing sunshine.

If conditions have been dry then normal running shoes will suffice, prolonged wet weather will probably require trail shoes but as us runners say, “there’s no such thing as bad weather, just the wrong clothing.”