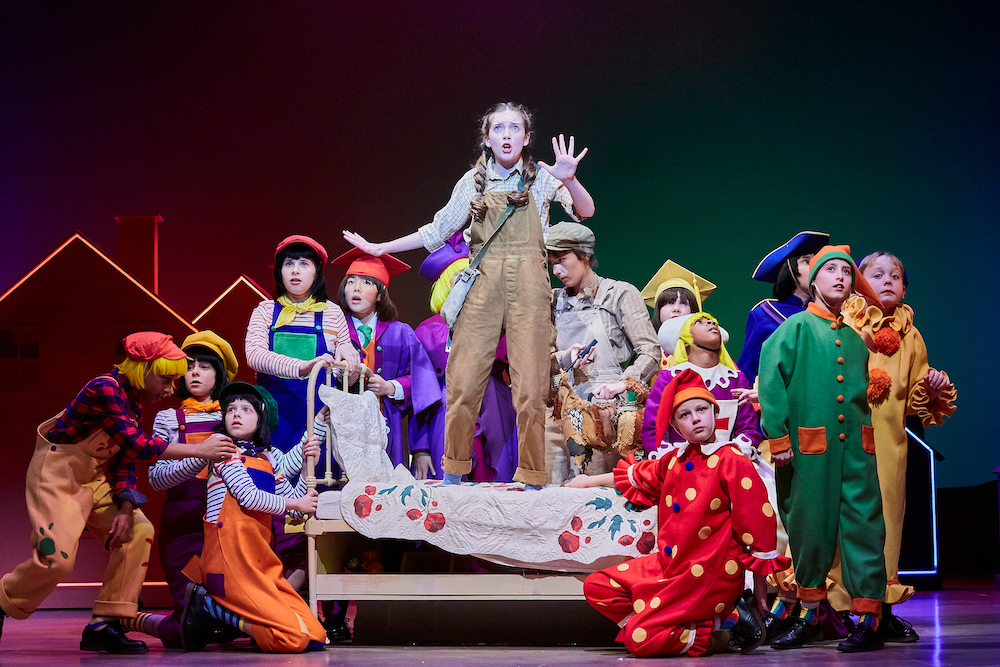 We visited the Playhouse on Tuesday to see the performance of The Wizard of Oz and what a wonderful show it was! Having been completely obsessed with the film as a child it was a great treat to see it played out in live action before me.

Lucy Sherman was just amazing as Dorothy – it was hard to comprehend that such a powerful singing voice came from such a petite, young lady. As soon as she began to sing Somewhere Over the Rainbow, it felt like coming home. 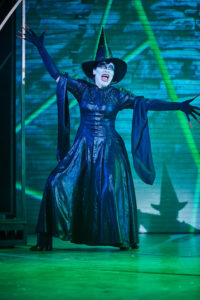 Polly Lister, as first the mean and Toto-hating Miss Gulch and then the even meaner Wicked Witch was absolutely mesmerising. She had the perfect mix of nastiness and humour – she was very often laugh out loud funny, but still intimidating enough to have small children in the front row cower in horror as she cackled towards them.

As the tornado hit Kansas, the effects were spectacular – the rain and swirling buildings were projected onto material, whilst Dorothy was being spun and whirled by members of the cast. The aerial artists were breath-taking.

The introduction to the Munchkins was brilliant – the actors playing the diminutive folk were so engaging and full of character – I was so impressed with their level of skill.

As Dorothy landed in Oz, her real life dog was converted into a patchwork puppet. The puppetry was fantastic and I really felt for the person who had to animate the dog and was slightly bent over for the entirety of the performance – I think most of the audience shared my sentiments as very enthusiastic applause was reserved for the puppeteer at the end of the show. 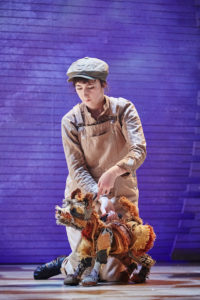 In Oz, the set looked amazing and magical, a partly revolving stage and dancing light portrayed the yellow brick road beautifully. Sam Harrison as the Tin Man, Marcus Ayton as the Lion and Eleanor Sutton as the Scarecrow were all so engaging and really helped the audience subsume themselves into the story. The Lion was cowardly and absolutely hilarious in equal parts – he had always been my favourite character in the film and Marcus did not disappoint me portraying him on the stage.

There were many great musical numbers and dance performances scattered throughout the production and particularly outstanding for me was the jitterbug scene where zombie like people were made to compulsively dance, thanks to an evil spell cast by the wicked witch. Again I was astounded by the skill of the smaller members of the chorus – their dancing and acting skills were second to none. I was so impressed at such young people showing such accomplished skills.

A special mention from me has to go to the three apple tree ladies played by members of the ensemble. Their costumes were unbelievable as were their tree like movements and consternation at having parts of them eaten by Dorothy.

The whole show was mind-blowing – the singing, dancing, effects, ensemble and costumes really transported us to the wonderful world of Oz and it was heart-warming to see the reactions of the small children in the front rows – especially when the winged monkeys screeched towards them. At points Dorothy and her Oz crew ventured into the audience which was great for us all to see and drew the audience even further into her adventure.

If you get a chance, get yourself there and join in the fun over the rainbow.

Photos: The Other Richard