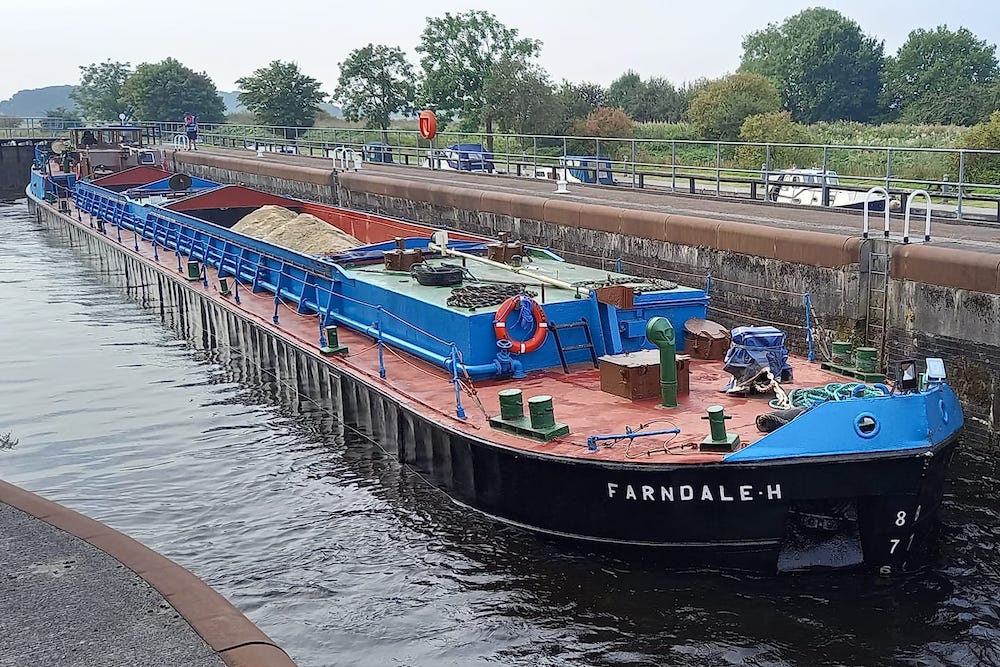 “This shows the value of using barges”, said CBOA Chairman David Lowe. He continued: “With all the news about HGV driver shortages, it is salutary to remember that the crew of a 500 tonnes capacity barge can move that cargo more quickly than if they each drove an HGV between Hull and Leeds”

“Barge use also fits in with the de-carbonisation agenda”, went on Mr Lowe.

Research has shown that barges have for years created less emissions than heavy lorries – only 25% of that produced by lorries. Not satisfied with that, the barge industry is moving to use biofuels with hydrogen treated vegetable oil (HVO) being favoured. Barge companies have reported 90% reductions in net carbon dioxide emissions.

Even if all lorries were electrically powered, they would still create damaging dust particulates from brake pads, from tyre wear and from road surface wear. None of these arise with barges.

“Using barges improves the environment and people’s sense of well-being,

“So I call upon the Government, in the year it hosts the 26th UN Climate Change Conference (COP26) this autumn in Glasgow, to increase infrastructure investment in improving the nation’s waterways”, said Mr Lowe.

Andy Collins of AC Marine Aggregates, the company whose aggregates have been brought to Leeds, said

“The re-opening of the canal, thanks in large to the work completed by the Canal & River Trust, has enabled us to kick start the marine  aggregates business back up in Leeds, which, if the news on the effects of global warming  in the last 9 months has taught us anything, is a win-win for both our customers and the environment. A prime example of how delivery by barge is beneficial for everyone is our existing project supplying Amazon’s new distribution centre being built in Leeds; by using Knostrop wharf we can massively reduce both CO2 emissions and vehicle movements.”

The use of marine dredged aggregates (from the North Sea) is a sustainable activity as nature replenished the deposits at sea. Not so with land based supplies.

The use of 500 tonne capacity barges and thus avoiding using heavy vehicles from inland quarries will also be beneficial for the environment. Each barge will take off the crowded M62 18 articulated lorries carrying 28 tonnes. Barges can help Leeds City Council in its efforts to improve air pollution and improve the well-being of its citizens.

The area being used at Knostrop is about one-tenth of an acre and is seen as a temporary phase. The Canal & River Trust’s wider ambitions are to see the development of a 10 acre site at Stourton on the outskirts of east Leeds as a wharf to handle at least 200,000 tonnes pa. of cargo. Planning permission for the wharf has been obtained and the West Yorkshire Combined Authority have offered £3.17m towards the costs. The full business case is now being developed which, if approved, would enable construction in 2022.

The barge traffic resumed after repairs to the Aire & Calder Navigation had been completed. Last December, one of the canal banks (a little west of Goole) nearly collapsed. Engineering surveys showed a need for extensive works, hampered by the fact that the work was adjacent to a small aqueduct taking a river under the canal.