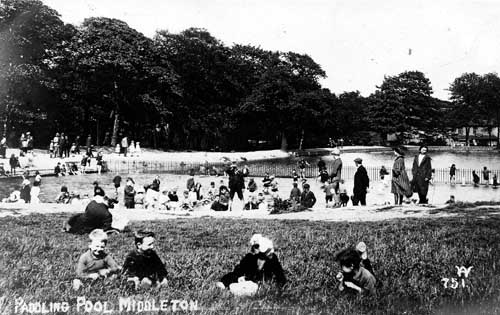 I was born in Middleton just after the end of the Second World War and lived there until I was 35 years old. Life was simple then and children played together and made their own entertainment.

I played with boys and girls in my immediate neighbourhood and my best friend lived next door. Most of our play was after school, at weekends and during school holidays.

Middleton estate was built with houses that had gardens, but most of our play was in the street and on the grass verges.
Lots of the neighbourhoods had verges on one side of the streets and in those days, there was nothing to stop us using them as football pitches or rounders pitches.

The days of “No playing on the grass” or “No ball games by order” did not come into fashion until much later. Most games were communal. We all played football, using any ball that was available and coats and jumpers used to mark the goal posts.
We played rounders with any sort of bat and ball, using the corners of the verges as bases. We played cricket using the garden gates as wickets, with the bowlers running over the road to bowl.

Although we lived on a bus route, the bus only came one way round every half hour. We knew the timetable and had to stop play whilst the bus passed. Other games were more seasonal and favoured by either girls or boys. Boys enjoyed playing marbles or “tors” as we called them. They would often play in the gutter and many marbles were lost down the gulley grates.

There was always a lot of hanging around when the gullies were cleaned as the lost marbles were retrieved by the workmen and given back to the children. Autumn saw the boys playing conkers – no health and safety issues for us! We played whip and top decorating the tops with chalk stripes in different colours which gave a pleasing design as they spun round.

Skipping was popular especially with the girls but the boys did join in at times. The poor skippers were used as winders of the ropes and if there were not enough winders, we would tie one end of the rope to the lamp post which meant that we could skip with one winder.

We used our mothers’ old clothes lines as skipping ropes. Hopscotch was a game enjoyed by both girls and boys but girls were usually better than the boys. We would draw in chalk a large hopscotch on the pavement and take turns.

Of course, we had to stop play if anyone was passing and then carry on from where we left off. My mother wasn’t keen on me drawing on the pavement and I was often made to wash the hopscotch off, using a mop and bucket, if it was outside our house. Boys would make bogies, best described as a kind of go-kart.

Not many of us had bikes, so this was the next best thing. A set of wheels were needed and these were usually from an old discarded pram. A base was built from old wood which would sit on the chassis and then built up to form the bogey.
A length of rope was attached which the driver held to steer. Going down hill was rather precarious as the bogey would gather speed. There were no brakes – a strong foot was needed to slow and stop the bogey!

There were fields at the bottom of our road where the housing finished. These belonged to a local farmer who grew corn, peas and rhubarb (we called it “tusky”).

We would often go roaming in the fields, making dens in the cornfields before harvest time and pinching (stealing really) peas and rhubarb to eat.

A great delicacy was to have sugar in a paper bag, dip raw rhubarb in it and eat it as a snack. Another snack was cocoa and sugar. We mixed the two ingredients in a paper bag and ate it by dipping our fingers in it and licking it off.

In the autumn, we would go “blackberrying” (collecting blackberries) at a place beyond the field we called Blackberry Hill.
There was a stream nearby and we spent time jumping over it, trying not to get wet in the process. We would go armed with jam jars to collect the fruit – no plastic boxes at that time. We would eat as many as we collected.

My mother always used the fruit for blackberry and apple pies. Sometimes, we would go wandering off into Middleton Park or the Plantation.

The Plantation was a type of scrub land where the Westwood estate was built. When I was a child, it was a kind of wasteland.
When we went to the park we would play on the playground and wander through the woods. In spring time we would always collect bluebells for our mothers.

My mother used to tell me not to pick more than a handful and to pull the bulbs up. We would collect other wild flowers in season and these were usually put in a jam jar on the kitchen window sill until they died.

We usually went gallivanting into the park and woods during school holidays with a jam sandwich and a bottle of “Spanish wine” for sustenance. This was a concoction of water to which we added hard liquorice that was called “Spanish”. We would be out all day and this had to keep us going until teatime.

There were no limits to our jaunts. The only proviso was to be home for tea otherwise we would be in trouble from our parents. Wherever we went, we walked.

The bus went round the estate, stopping at the Middleton Arms, but there was no money for bus fares. It could take us 30 – 45 minutes to get to the park, depending what we saw or did on the way. These outings were like expeditions to us.

They would be arranged the day before; permission sought from our parents and then on the day the preparation of our snack. We would call for all our friends who were allowed to go and then the world was our oyster.

We ran, climbed, skipped and fell. I remember always having sore knees with either a plaster or antiseptic cream being applied to every injury. As children we were given free range to play and roam. We spent lots of time outdoors and lots of time roaming free. We were made of strong stuff. I think that my generation was the last to benefit from this.

2 Replies to “Playing out in Miggy, back in the day”