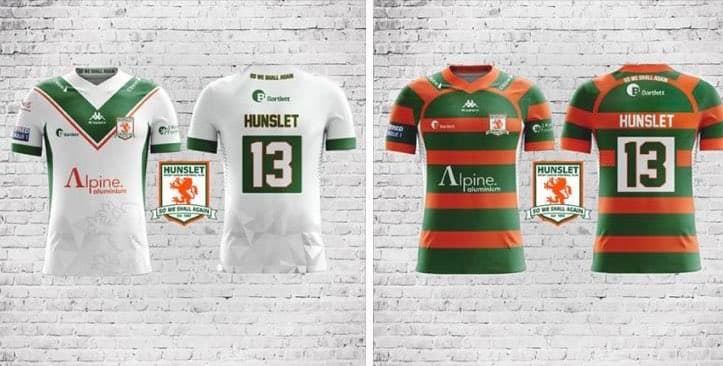 It was an abrupt end to Hunslet RLFC’s season this year when the Covid pandemic struck back in March. The Parksiders had just been knocked out of the cup by a rampant Featherstone Rovers side 46-6, but sat at the Top of League 1 unbeaten and had in fact (including friendlies) won 7 out of 8 matches.

As we reported, Hunslet will not now play again until next season (Covid pending), so it’s all about being prepared. Coach Gary Thornton has signed up for 2021 and negotiations now begin with the players, but to keep the supporters busy Hunslet have decided to let the fans design next year’s kit.

The brief is that the home kit must be traditional colours of Myrtle, White and Flame. But the away kit can be anything you like.

Hunslet fans are sticklers for tradition, but in fact the club started back in 1883 playing in Blue and White Quarters. This then morphed into the famous White Shirt with Chocolate badge worn in the 1907/08 ‘All Four Cups’ season.

When the white shirts became difficult to launder the club looked for new colours. Leeds already had the city colours of Blue and Gold, so Hunslet took the university colours of Myrtle (dark green), White and Flame (orange).

This kit was famously worn in the great 1930’s victories at Wembley and in the Championship Final against Leeds at Elland Road and soon became synonymous with the club.

By the time Hunslet reached Wembley again in 1965 they were wearing the alternative strip of White with a chocolate chevron (V) another firm fan favourite.

In the days at the Greyhound stadium various shades of green were toyed with as Hunslet became New Hunslet, and later as Hunslet Hawks many new designs were tried as kits went fairly psychedelic.

A dark green with amber hoops was worn on day one at the South Leeds Stadium whilst for the 1999 Premiership Final the Parksiders wore dark blue and white. Since then we’ve seen maroon, black and even for one season to honour three players the colours of Papua New Guinea – red, yellow and black.

Whatever takes your fancy, if you’d like to submit an idea you can find plenty of kitbuilder sites online that are easy to use.

Entries are to be posted on Hunslet’s Facebook page or ‘Myrtle Through and Through’ supporters page (you may need to ask to join) or on Hunslet’s Twitter feed: @HunsletRLFC.