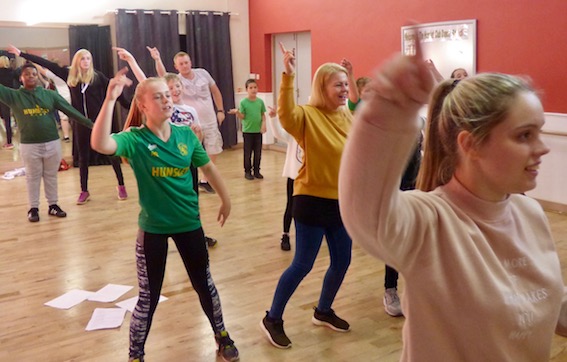 I went along to check how rehearsals were going for the Hunslet Club pantomime – Peter Pan.

It was late on Saturday afternoon when I arrived and the Club was quiet, the lull between afternoon matches and evening entertainment. I found my way up to the dance studio where twenty young (and not so young) people were learning dance moves. Everyone seemed to be very upbeat and thoroughly enjoying themselves. Surely that must be a good sign for the show.

The Director, Liam Robbins, told me it was a very easy group to work with:

“Usually on show it takes a few weeks to bring the cast together as an ensemble, but these guys already know each other from the club” he said.

Keeley Haigh is playing Peter Pan and tells me it’s going “really well.” She’s worked her way through all of the club’s arts classes over the last six years, but was still shocked to be cast in a main role.

“I’ve done a little acting at school (Rodilian) and definitely prefer acting to singing, but all the songs are sung as a group so it’s OK.”

I catch up with club stalwart Dave Sadler as the cast prepare to start their first full run-through. “It’s OK” he says “I’m not in the first scene.” Dave has been cast as the baddie, Captain Hook. I ask about his acting experience: “This is the first time I’ve ever done anything like this” he tells me.

“I’ve been here 14 years, I love the job, I love getting involved in anything that’s happening at the club.

“It’s important to get people out of their comfort zone and great to see their confidence growing” he added.

This pantomime really sums up the spirit of The Hunslet Club: fun energy and a great way to bring the community together. It’s the best way to get your Christmas started, so get your ticket now!