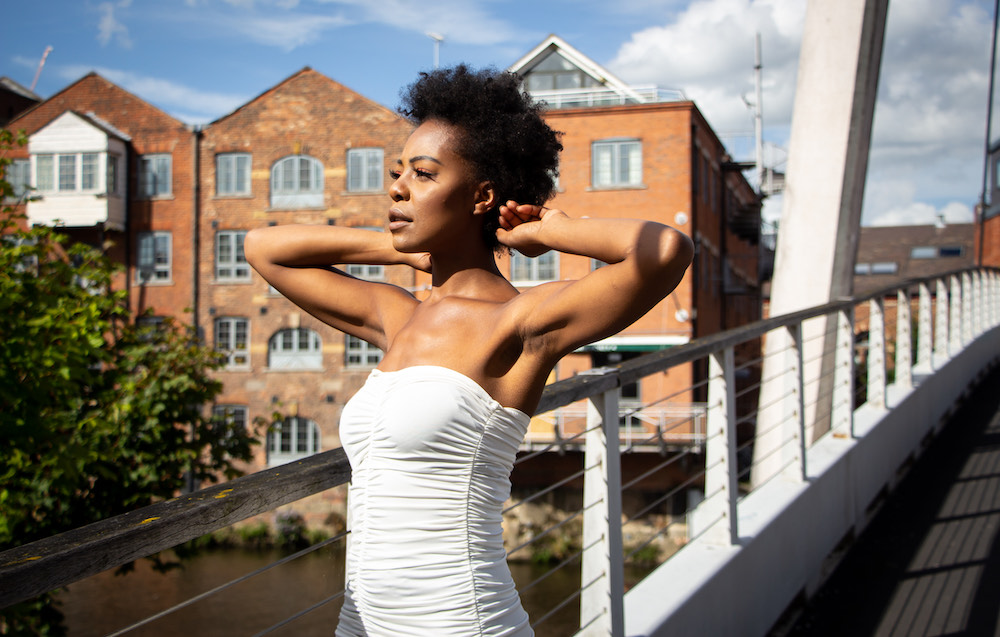 When Pearl-Natasha Waungana Doherty dropped her newly made music video: ‘Moved On’ into a local Facebook page I listened and wanted to know more.

Despite my lack of journalistic experience and shyness, I was not going to let the opportunity of talking to a musical talent living in Beeston pass me by. What I received instead of an interview, was an experience, which was both celebratory and a cautionary tale of a world without creative input.

Pearl-Natasha settled in Beeston via Derry in Northern Ireland, after spending her formative years in her birth country of Zimbabwe. After minutes of chatting she exuded the optimism, wisdom and caution I feel is present in the many people I have met of mixed heritage and cultural background.

Pearl-Natasha studied Sports Coaching in Leeds, and for a while was in-between her life in Derry and her new life in Leeds. After trawling around the usual student living hotspots, she decided on a home reasonably close to a friend in Morley. Pearl-Natasha described flying into Leeds, spotting a house in Beeston on Gumtree, being given 2 hours to view by the landlord and leaving with an overwhelming sense of community and home.

I ask about her journey into music:

“All my memories have music centred at them. My birth father is Ndebele which is a tribe in Zimbabwe and they are (a) very, very musical culture, very big dance culture and my mum is from Harare which is the capital city and is very Shona focused … that is another very musical city … the languages are quite melodic and pentatonic … so music was always a form of expression. … Music had the words that I didn’t want to say out of my own mouth.

“When I was doing sports I started to sing more but always… performing alone… I got very comfortable singing to myself and singing in big empty spaces to myself.”

The transition between being a private singer and a shared public persona is a recent outlook:

“It is only recently that I have said it’s not actually a secret power, I actually should let people know what I can do.”

The period of time between 2018 and now was a time of change for Pearl-Natasha, instead of a rapid release of songs, perhaps seeking approval:

“Now, I don’t care what people think but there is definitely something I want them to see (and) hear, and that is actually me … the reason why I am happy with the Moved On video is because I recognise the girl in that video as the person I am at home, I recognise my authentic self.”

I have become familiar with the disingenuous usage of ‘authentic self’; Pearl- Natasha’s usage is a call to humans, especially women, everywhere. It is no mean feat to remind strangers there is a fundamental need to be human, and within that humanity a need to be creative.

Her song writing grew out of this self-expression: She sees parallels to Tracey Chapman’s poems put to music approach.

“My first song Autumn Sky was actually a poem.”

I miss-guess her musical influence: I venture she has a church background. She laughs at me and states her love of Country Music: Dolly Parton, Kenny Rodgers and Tracey Chapman. The penny drops and I recognise that influence in Autumn Sky – where her soft vibrato and lilting tones takes me straight to country greats.

Do not be fooled, Pearl Natasha will not be pigeon-holed, she describes her music as “Pop – because for me pop is short for popular, it is a bit of an Afrofusion. I am the epitome of an intersection. I am African, I am a black woman, I am a member of the LGBT community, I was raised in Ireland, I speak multiple languages.

“The more people realise we are a diverse profile the more we will hear different sounds. I make pop as in it’s relatable, there’s a take away, you pick up a piece of yourself in the song and you walk home with it and it’s yours.”

Pop music in 2020 no longer denotes factory driven hits but a freedom of expression. Her ease in her own skin is portrayed effortlessly in her recently made video ‘Moved On’ where she celebrates her love of Leeds by a musical walk through the city she has come to love and call home.

Pearl-Natasha’s enthusiasm is contagious and it is obvious she is determined and justified in her recent decision to pursue creativity full time.

Reading between the lines (she is not the complaining type) I suspect these past few months have been somewhat of a personal battle. She began lockdown working from home in recruitment “in the highest paid job I had ever had” and “having the funds to fund my music at the leveI I’d like to do it.”

Pearl-Natasha says that Covid has turned her life 360, she was working many hours, her gigs were drying up and she was dealing with unprecedented stress levels until:

“Money, not that it became irrelevant but perspective hit really quickly … do you know what? You’re a person, you’re not a workhorse. You are a person first and if you get this virus at this stress level you are gonna die.

“I literally left my job, but I am writing the best music I have ever written, I am eating again and sleeping again.”

I suggest that her background in sports would see her take a disciplined approach to her creativity, but she vehemently denies this.

“I am not disciplined whatsoever. My boyfriend says for a singer I never hear you singing. That’s the truth, I should sing all the time, but I realise whereas before I needed that burning sensation – I am actually writing down, I am actually being real now.

“I’ve got my own words and if that means I will spend 3 hours on one verse it’s because I want my words to be heard as me now. There is no discipline as far as I can see it; it’s a journey of just finding your truth.”

I struggle to see beyond my subconscious bias of discipline being the only way to succeed but come to realise an organic way of working is not synonymous with ‘no work’. It is obvious the urge to write songs and share her voice will drive Pearl-Natasha’s musical pathway.

Pearl-Natasha is a natural storyteller. She describes her Zimbabwean friends’ confusion over the need for UK citizens to be told to wash their hands.

“They (Zimbabweans) have a very good pandemic response. The behaviours are intrinsically adopted into culture. In our culture when I walk into your house the first thing I go and do is wash my hands, I take my shoes off. These are things that are ingrained into our society.”

I reflect on the importance of having conversations about how other cultures and countries approach everyday life, and the richness of learning through this type of sharing. I will be washing my hands if you invite me around your house anytime soon.
Just before it is time to leave the ubiquitous Covid-times Zoom call, Pearl-Natasha leaves us with a heartfelt message. Her message touches a raw nerve. She implores us to look into our lives and consider how much of an impact creative practice has:

“From the radios to your visuals to the fact that your car is even aesthetically pleasing that is due to our visions, our ideas, our hard work.”

She, along with many other creatives feel neglected, the self-employed are renowned tax payers and yet the support they’ve received has been patchy at best.

I ask what can be done to support the creative and her response is researched and swift:

“Ordinary people need to make noise. Every time you are listening to a song on Spotify and you have Facebook or whatever, you should tag the government and say to them ‘how are you making sure this person is keeping their lights on?’’

“I really do think it should be that pedantic. Every creative should be saying: ‘you are listening to my music, if you like my art, if I am making you laugh on this camera, if I have improved your life because of the greatness I am- can you please go tell the government? Can you hold the government accountable?’”

This is a relatively new experience for me, someone providing a practical solution to an issue when asked. With this Pearl-Natasha has closed a circle – I am as I was when I first heard her music, impressed, moved and intrigued.

Natasha-Pearl will soon release an EP. Follow her activity at:

iampearlnatasha.com
www.instagram.com/iampearlnatasha
twitter.com/pearlNATASHA
pearlnatasha.bandcamp.com (Don’t forget on anything you buy on Bandcamp on a Friday 100% of the revenue will go to the artist).

2 Replies to “Pearl-Natasha has Moved On”