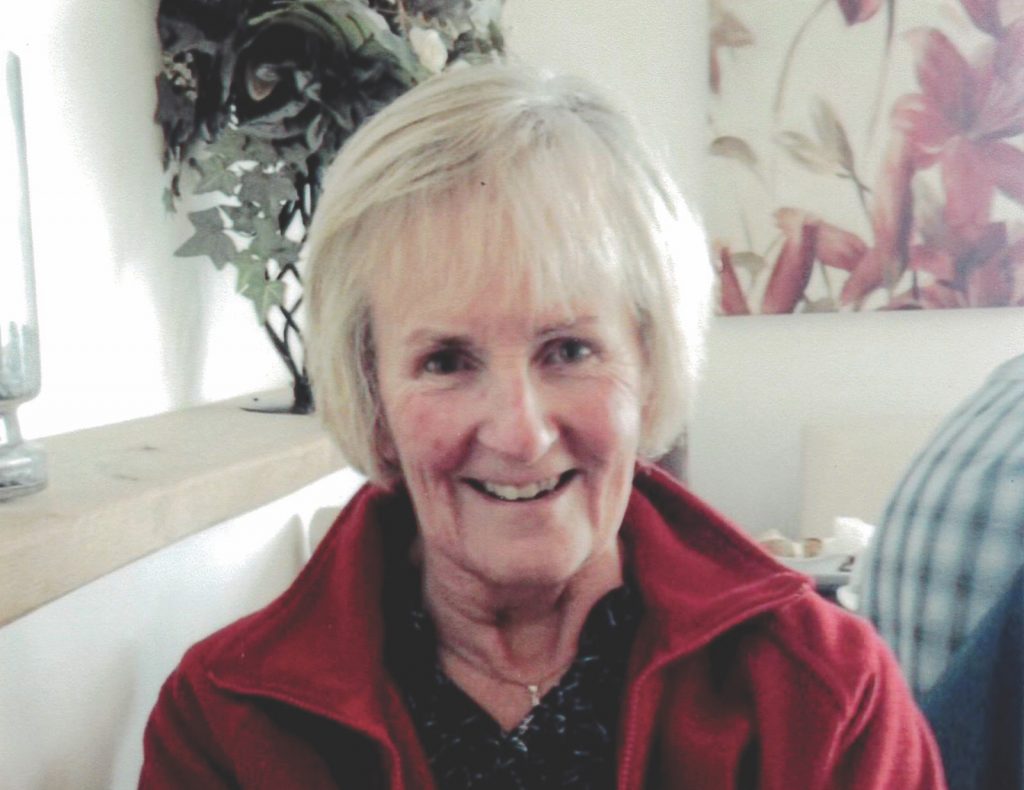 Occasionally in life we have the privilege to meet remarkable people. Maureen Woods was one such person. Maureen passed away on 5 November 2017 at home surrounded by people she loved. On Thursday 16 November West Grange Church in Belle Isle was packed to the rafters, with people literally spilling out of the door, all there to say goodbye to Maureen, a fitting tribute to someone who had touched so many lives.

Maureen was born in Belle Isle on 14 May 1944 in the house she lived in all her life. She grew up on the estate and was employed at ‘Soapy Joe’s’ for a number of years before leaving to devote her life to working, initially among the people of Belle Isle, and then further afield, as families moved to other areas in South Leeds and beyond; her work took her wherever there was a need. For short periods she also worked at St George’s Crypt in Leeds and in the kitchen at St Andrews Bible College in Malton.

Many of Maureen’s friends believe God gave her a special gift and called her to work among people of all ages; children, young people, adults and families. Maureen loved people.

As one friend commented, “She was always properly interested to know how you were, and what was happening, and when she could pop in for a cup of tea”.

Another friend said of her, “A five-minute journey in the car would often take at least half an hour with Maureen as we frequently had chores to complete – cards to post, things to deliver, people to pop in on. Maureen often asked for the car to stop so she could speak to people we passed on the estate, many of whom had links as children with West Grange from years, sometimes decades earlier. Now adults and only barely recognisable to most, because of the passage of years, Maureen remembered them, anxious to say hello, and keen to enquire and show obviously genuine interest in their life and circumstances.”

Even on the journey back from the hospital, where she had received the news of her terminal illness, she called out to ask a lady who she recognised how she and her family were doing, with no mention of her own illness.

At the age of 11 years old Maureen attended Sunday school at East Grange Church and faithfully attended the church throughout her life. In 1968 the church moved into a new building and became West Grange Church. Maureen loved children and through her involvement in the children’s work at West Grange from her teenage years onwards until shortly before she died, she became a second mum or favourite Aunt to literally hundreds.

Her Sunday school room was always packed full. Maureen began with a walking bus down to church and then, as families moved further afield, she enlisted some help and sent a minibus out to pick up the children.  Maureen loved teaching her class, and the children loved her.  She was genuinely interested in them, loved them and they were drawn to her and not just because of the blue toffees she gave out.

As the children grew up and moved on, Maureen stayed in touch, often sending cards or letters.  Maureen also helped lead a Bible class on a Sunday afternoon and one close friend said:

“I loved going to church on a Sunday afternoon. I think because I felt heard and seen. There was laughter and learning, competition and cheering. Maureen would teach us how to find our way around the Bible and teach us verses by playing a game. This became my favourite game as it was here I began my love for the Bible.” 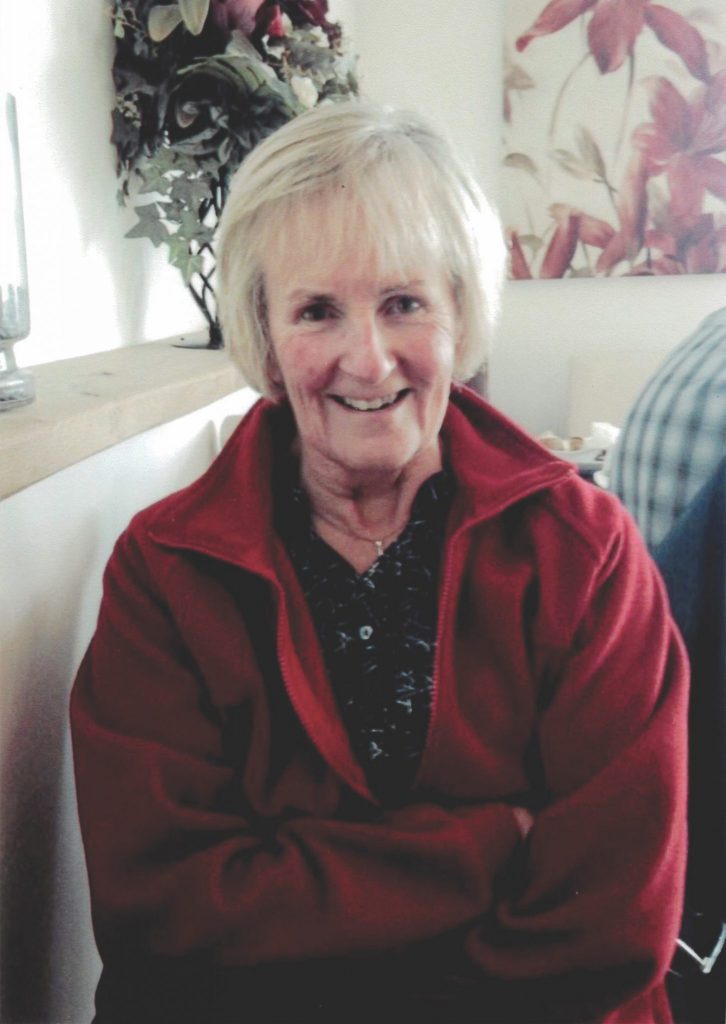 It was said of Maureen that she had very few acquaintances and many, many friends. Indeed, her capacity for deep relationship with such a large number of people was truly astonishing.

Another friend of Maureen’s said of her, “Maureen loved people and showed it by giving in so many ways, she gave her time, money, flowers, toys, gifts, food…. the list is endless.”

Another recalled the time when Maureen came to visit and having spent some time listening declared that she felt they needed a holiday. The next day Maureen called to say she had arranged for them to go to “Adam’s Bungalow” in Filey to stay for a week with all the transport arranged.

Over and over again it was said of Maureen, “she has been there for me and my family, turning up at the hospital, just to sit with you, sending sandwiches because you were on the move and didn’t have time to cook, making you a lasagne, sending Mars Bar crunch, because you didn’t need to be worrying about going to the shops right now.”

During a particularly difficult time in another friend’s life Maureen was there to support. They recall

“I did not tell my friends about the problems for weeks, but the one person who just knew something was not right was Maureen and it was Maureen that got me to sharing what was going on. We would meet every Saturday at the Bendix launderette at Middleton, me taking my pillow slip full of my family’s clothes to be washed and Maureen would bring a bag of washing on the bus from Belle Isle. We would watch the washing, help each other fold clothes out of the dryer and we would talk. I would talk. I found in Maureen an adult who I could trust. She listened to me. She cared for me in practical ways. I used to throw the clothes from the dryer in the pillow case until she showed me that folding them meant I might not need to iron them!!!

“She talked about Jesus a lot to me and because of her my relationship with the Lord Jesus grew deeper and stronger through some very difficult years as a teenager caring for my family. Maureen quickly became an extended member of our family and would come every Christmas to stay in our home because our parents and family loved her.”

Her love for such an extraordinary number of people was also evident in her fortnightly coffee afternoons at the church which she started and ran for 30 years. People would come for a drink and the delicious homemade cakes, but more than anything would come because they were loved and felt safe and because they had someone who listened to them, who prayed for them, who went out of her way to do whatever she could for them.

Why did she do all this? Well, at each and every coffee afternoon Maureen would explain her reason: “I would hope that the Father’s heart would touch your heart today.” Maureen loved people because she knew how deeply she was loved by God and how deeply God loved others. She laughed with people in times of happiness, cried with people in times of loss or sadness and was always there with a word of encouragement. Rarely has anyone loved so extravagantly with such commitment and energy. Maureen always said she didn’t like her own voice but she was not ashamed to use her voice to talk with so many, many children, young people, friends, family and anyone she came in contact with.

Maureen dearly loved her husband Pat. Maureen always wanted to be married and waited a long time for the right husband. She married Pat in 2001 and the 16 years she and Pat had together were her happiest. Maureen loved to write and Pat would often find notes and cards in his lunchbox, and even at the end, Pat found a note tucked in the gas bill:

“Pat, I love you more than anybody else on earth, and I so want you to be happy… love Maureen x”

He didn’t find it until after Maureen had died.

Maureen continued her work for the rest of her life and was out visiting until just three weeks before she was taken to her heavenly home.

She organised and spoke at her last coffee afternoon just ten days before she died and shared the news of her illness and said she was praying for a miracle. As one friend rightly said “Her prayers were answered, Maureen’s life shared with and devoted to others was the miracle.”

Mother Teresa of Calcutta once said, “In this life we cannot do great things.  We can only do small things with great love.”  The community in Belle Isle and South Leeds and beyond has been blessed to know someone who lived this out in a truly astonishing way.

This post was written by Mark Hodgkinson using our Create an article for South Leeds Life page.