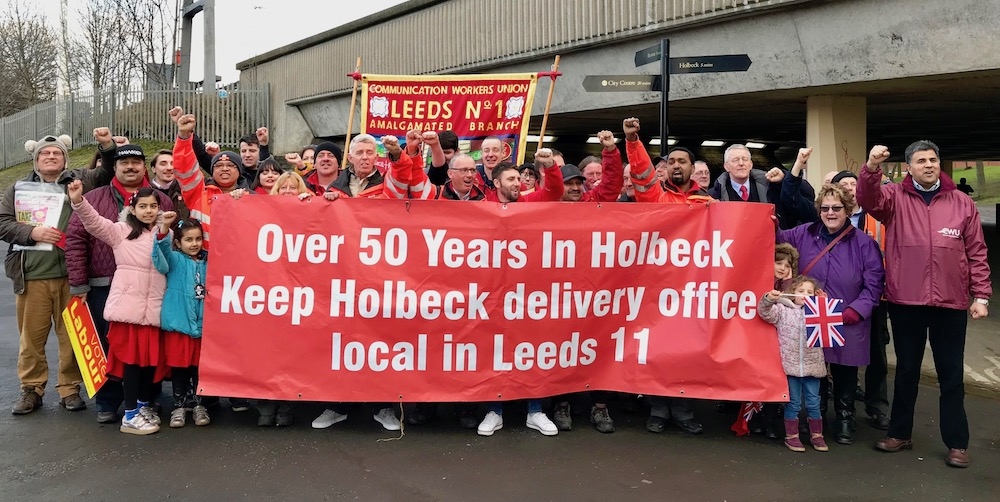 As South Leeds life has previously reported Royal Mail have decided to move the operation to its City LDO, located on Holts Crest Way Off Wellington Road. This is on the far side of the Armley Gyratory system, forcing difficult journeys on staff and public collecting parcels alike.

Amongst those present was Hilary Benn MP. Listen to what he told South Leeds Life:

“Royal Mail has, figuratively, stuck up two fingers to their staff and customers. We gave them 16 well-argued reasons not to close Holbeck LDO, we even suggested an alternative move to Parkside. They have made no comment whatsoever.

“They say they want to improve the customer experience, but we know the real reason: they want to make a quick buck selling the Holbeck site. They are asset strippers taking Royal Mail on a race to the bottom.

“We are not going to lie down, we’re going to fight it all the way. We shall not be moved from LS11!

“Royal Mail – listen to your staff and customers.”

“We don’t want you to move to our office. We are right behind you, this is a terrible move and a terrible idea. Keep up the fight!”

Hilary Benn MP highlighted the fact that Royal Mail was sold off by the government and is now a private company.

“I asked Royal Mail how many parcels were collected from the Holbeck Office over the last five years” he said. “They refused to answer my question claiming ‘commercial confidentiality’. It’s time the Royal Mail was taken back into public hands.”

South Leeds Life understands that the CWU are shortly to ballot members at Holbeck on industrial action to stop the closure.