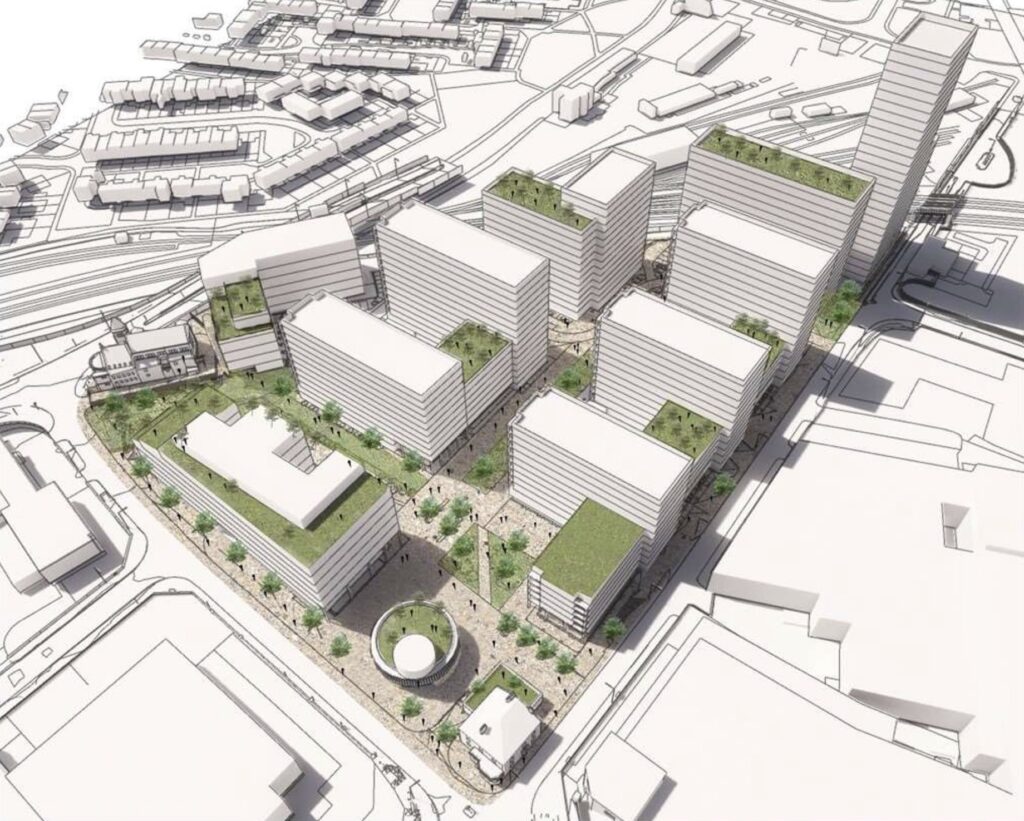 Plans for a mixed use development including 1,200 residential units as well as offices and commercial properties have been discussed with Councillors on the City Plans Panel.

The site, bordered by Nineveh Road, Marshall Street and Sweet Street and adjacent to the Holbeck rail depot, has lain derelict for many years. The site formerly housed the Kays Catalogue warehouse which was built in 1981 and deolished following closure in 2004.

The site includes the historic Commerial Inn on the corner of Sweet Street and Marshall Street. The rail union ASLEF was founded here and the pub was run by Leeds United legend Peter Lorimer for many years. The plans are to refurbish the Commercial and retain it as a pub.

The plans include 760 market rented apartments and 475 apartments for sale. Two blocks, fronting Marshall Street and Nineveh Road, are designated as offices and there will be ground floor commercial, retail and leisure uses throughout the site.

The apartment blocks will range in height from 10 to 27 storeys, whilst the office blocks range from 4-7 storeys.
Attention has been paid to the open spaces between the blocks to encourage easy pedestrian access through the development. The open area around the Commercial, termed Sweet Street Square, is designed to encourage leisure use by the wider community.

Councillors broadly welcomed the proposals but had concerns about the building heights close to both the Commercial and to the former Holbeck library, which is not part of the development. There were also concerns about amenities for the residents with Cllr Colin Campbell (Otley & Yeadon) asking “where is that corner shop?”

Cllr Al Garthwaite (Headingley & Hyde Park) suggested that using names such as Greenmount Place and St John’s Green might be confused with streets in Beeston and Little Woodhouse. She suggested tapping into the local history and heritage of Holbeck pointing to local Suffragette leader Mary Gawthorpe and Kays which had been a major employer in the area.

She said using that heritage would help the site tie the older residential area of Holbeck to the so-called Holbeck Urban Village, rather than remaining a barrier.

The developers responded that both Greenmount and St John’s referred to the streets on the site before Kays warehouse was built. They have already been speaking to Holbeck Together and will be holding further community consultations in the coming months.

The plans are at a pre-application stage and will be worked up into a full planning application when it will be open to consultation and comment in the normal way.

The developers Westrock and Platform stressed that they are “in it for the long term” and will manage the rented premises themselves, rather than selling on to other landlords.

You read the full report to panel here and view the presentation slides (starting on page 108) here. You can also watch the Panel meeting here, discussion of this proposal starts at 3:36:00 into the meeting.

Image: A view of the proposed development looking south west with the Commercial Inn in the foreground and the old Holbeck library to the left

One Reply to “New plans for Kays site in Holbeck”