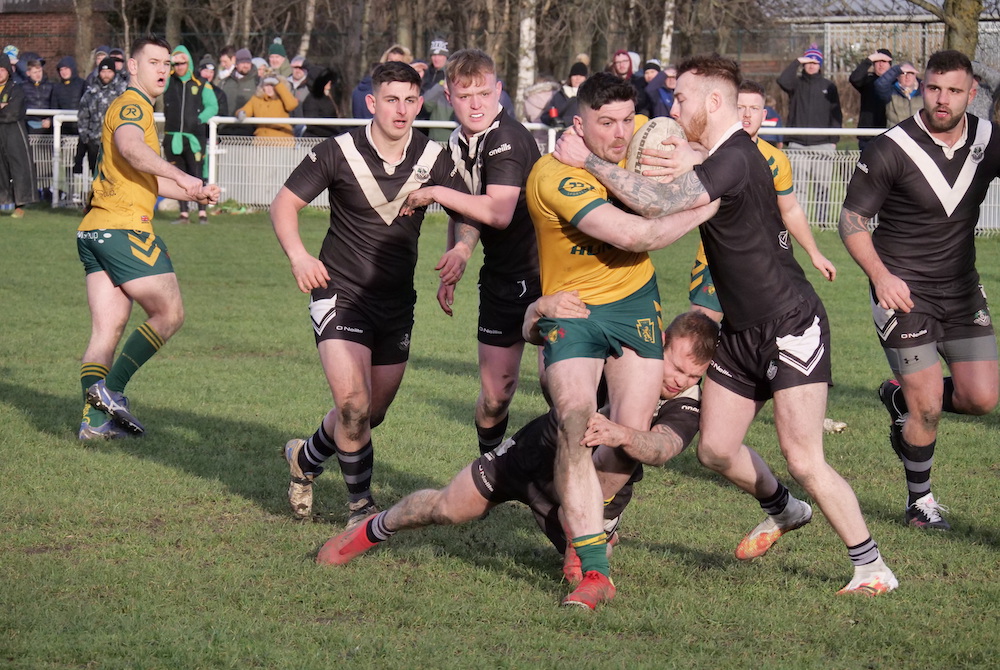 Bright sunshine and a howling wind greeted the combatants and a healthy crowd on Saturday afternoon (29 January 2022) for the much awaited Second Round Betfred Challenge Cup tie, won by Hunslet Club Parkside with a 22-12 victory over west Leeds neighbours Stanningley.

Stanningley had the best of the opening period – a series of early penalties giving them good field position to be able to test the home sides defences – a test Parkside passed with flying colours. Having survived the visitors early pressure it was Parkside who opened the scoring when, following a drive to the posts from Harry Dodd, prop forward and captain Jamie Fields powered under the posts on 12 minutes. Jamie added the extras to his try for a 6–0 lead.

Both sides had their chances on attack following the opening score but it took until the 32nd minute for the next try when Hunslet scrum half Ritchie Westwood outpaced the visitors defence with a 20 metre sprint to the line. No conversion this time and it was 10–0 at the end of a hard-fought opening 40.

Parkside added to their first half lead on 68’ when Omar Alrawi’s pass put left wing Connor Squires over in the corner, brilliantly converted from the touch line by Jamie Fields for a try which proved to be the game-breaker for a 16-0 lead. The last five minutes of the match saw three tries, the first to Stanningley through Josh Adams, quickly followed by Kieran Webster’s effort for Parkside. The final action of the game seeing the visitors crossing for their second.

“Today’s game was a tough one. We knew Stanningley would be a tricky game, they are coached by Ash Golding, a professional player so we knew they would be defensively driven and real good at it which they were. I think their game plan was to off-load on contact and keep us big boys moving about the park.

“I thought we showed great resilience. In the first half we weathered everything they threw at us and for the second game of the season for the first team we were proud of our efforts. Our attack was a little off pace but we had three big players missing and the wind made it tough to play. Despite all that I think our halves went well.

“The second half was a little more frustrating. We couldn’t really keep the ball and complete our sets to grind down the opposition. I was impressed with the workload our forwards got through, especially young Jack Briggs and Kieran Webster on home debut. There’s a lot of positives for us … and some lessons to learn. It was brilliant to see a big crowd at the game today and we’re really pleased to be in the hat for the 3rd round – and hopefully a semi-pro club which would be great for the club financially and a good test for us!”

Parkside made it through to the next round despite being without full back and 2021 National Conference League Player of the Year Craig McShane, experienced half back Andy Hullock and powerful second row forward and club captain Ben Shulver – all unavailable. Their absence might have impacted the team on attack but if ever the mantra “defence wins matches” was open to question the teams fully committed efforts proved it true today.

The draw for the 3rd and 4th Rounds of the Betfred Challenge Cup will take place at 6pm on Tuesday (1 February) at the Crown Oil Arena, Rochdale and will live on BBC Sport.