UPDATED: Hannah Davies has been found safe and well. 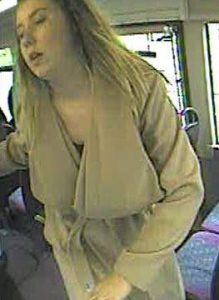 They show the 15-year-old on the 616 bus from Bingley to Bradford as it arrives at Bradford Interchange at about 4.30pm on Tuesday, 14 June.

It is not known at which stop she got on and these images are believed to be the last confirmed sighting of her.

Hannah is described as white, about 5ft 6ins tall, medium build, with blue eyes and blonde/mousy brown hair worn just past shoulder length with her fringe tied back.

Police are very concerned for Hannah’s welfare and urgently need to establish her whereabouts. She is known to frequent both Leeds and Bradford and extensive enquiries are being carried out to trace her.

Anyone who has seen her or who has any information that could assist in finding her is asked to contact the Leeds District Safeguarding Unit via 101 quoting log number 1562 of June 13.