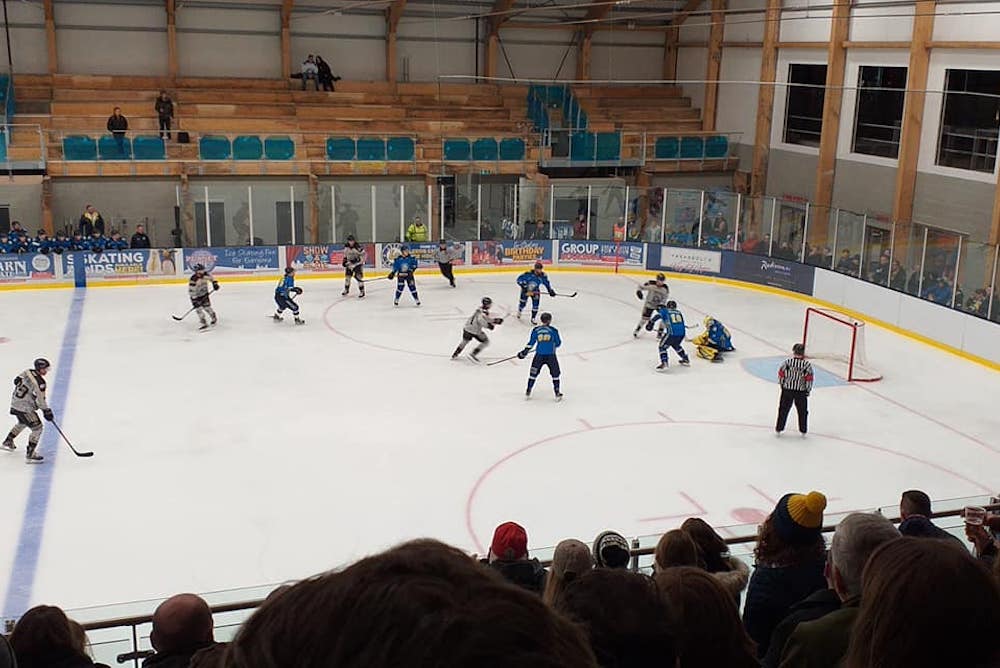 As someone who has spent most of his sporting life on Elland Road watching either Leeds United or Hunslet RLFC during their years at the greyhound stadium, the arrival of a new Ice Hockey team in the area has piqued a bit of interest.

The new Planet Ice rink on Elland Road (next to the park and ride) has only been open since late January, but the Leeds Chiefs have already played a few matches at their new home stadium (they’ve been playing away whilst it was being built).

Knowing nothing about Ice Hockey, but seeing how fervent the support can be whilst in the states, and from my own friend who is a Sheffield Steelers fan, I decided to venture down last Sunday evening to see the Chiefs play the Milton Keynes Lightning.

I booked online for a reasonable £13 (plus booking fee) into the still under construction Seating Area and headed off to Planet Ice.

Face off time (Kick off to you and me) was held up for half an hour, obviously to get the mass of Chiefs fans in! So I fitted in a couple of pre-game beers.

An overtime win on Friday night against Hull Pirates had got Leeds in the mood, and along with a good number of Chiefs shirt wearing fans there were a lot of Leeds United and Rhinos scarves, worn by people coming along to check it out.

First things first, Ice Hockey is loud and fast! The music is all part of the game, and also, so it seems, is belting your opponent into the Perspex barriers. Milton Keynes had brought a drum (hurrah) and a small but vocal set of supporters.

The first 20 minutes was pretty even. Milton Keynes scored first, before Leeds equalised. Then it seemed our discipline went as two Leeds players were sent off for a number of minutes, leaving only 3 outfield players and plenty of room for MK.

At the klaxon I asked a lady if it was Quarter time or Half time? “Third time” she said! Oh, well. First third over and Leeds had done well to keep it 1-1.

After a fruitless search for a Hot Dog (you have to!) I got back to my seat as the teams came back onto the ice and prepared for the action. Sadly Leeds were still in the dressing room as Milton Keynes hit them with two quick sucker punch goals, and as the last third came round it was do or die for the Chiefs.

This time with a successfully bought Hot Dog with Mustard (£4) I got back to my seat to see Leeds launch attack after attack. The game really does go back and forth but even with my little knowledge I could see the Milton Keynes Goaltender was having a good match. Sadly the goal never came to make it an interesting finish, and MK wrapped it up in the dying minutes with a fourth goal.

So a 1-4 loss, but the crowd didn’t seem too disappointed. I think as the Chiefs get used to their new home and fanbase there is no reason Leeds couldn’t become an Ice Hockey city. It’s 100 years since their neighbours started just over Fullerton Park and look where they are now.