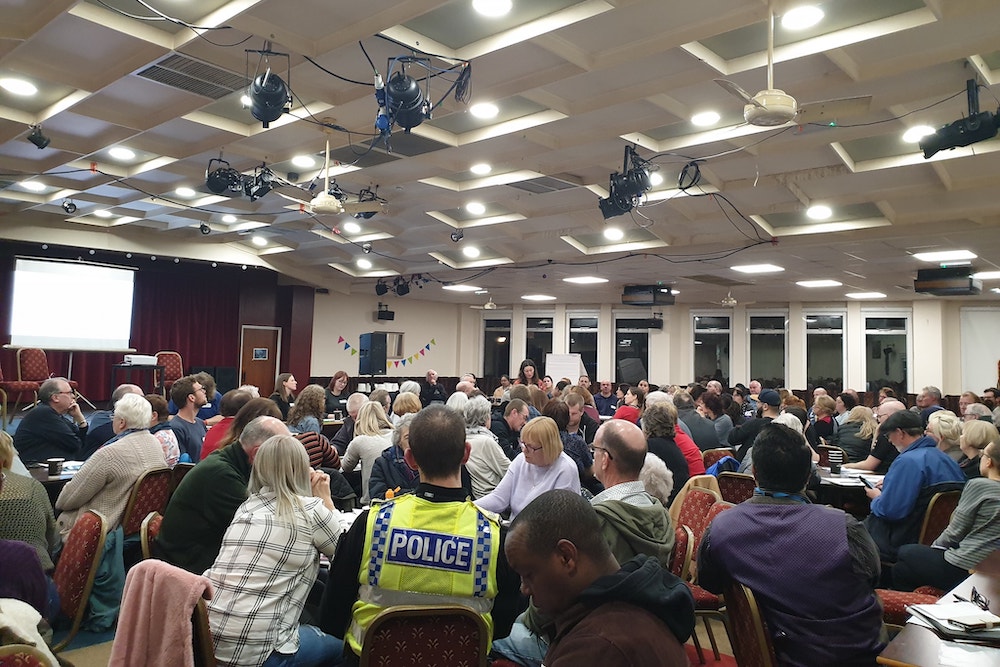 Listening Well ran over the course of a year up to February 2020 and consisted of nine round table events at various venues around Holbeck. Over 500 residents participated in the events which were also attended by representatives of the Police, Safer Leeds and Leeds City Council, including Councillors. The aim was to allow decision makers to hear directly from residents about their lived experiences.

The report documents scores of incidents, mainly in the residential areas of Holbeck including:

The Managed Approach was designed to keep sex work away from residential areas by tolerating it in an industrial zone between 8pm-6am. However, residents made it clear that this wasn’t working with incidents reported on residential streets at all hours of the day and night.

Residents expressed concerns for children in the area ranging from explaining the condoms stuck on buggy wheels through to girls being propositioned on their way to and from school.

They have also reported many negative emotional impacts including mental health issues and changing their behaviour, for example, not going out in the evening, avoiding walking and instead taking taxis due to the fear of being approached by kerb crawlers propositioning them for sex.

Speaking about the report, members of Voice of Holbeck said they wanted a clear exit strategy from the Council to see an end to street sex work in Holbeck. They feel more pressure should be put on the ‘punters’, usually men, with increased use of Automatic Number Plate Recognition (ANPR) cameras.

South Leeds Life understands that Leeds Citizens, who set up and helped facilitate the Listening Well project, felt they had to step away from the project when the draft report was shared, as this had broken the contract Leeds Citizens had negotiated with Strategic Lead officers in the Council, Police and Safer Leeds.

The Voice of Holbeck said:

“(We are) disappointed in the Strategic Leads approach to the findings of this report and all involved hope that Leeds City Council and partners will take seriously the experiences of those interviewed and surveyed for the report, putting into place many if not all of the recommendations.”

“We as local councillors always want to hear the voice of residents, whatever they are saying, and as such, we have supported the Listening Well Campaign and the process, with at least one of us attending every single event, if not all three of us. We will review the report carefully and consider its findings.

“That said, we are disappointed that the report is being published now when the Voice of Holbeck had committed to going through a fact checking process with Safer Leeds which has not happened. This commitment was reaffirmed as recently as 21 January. This lack of due process completely unnecessarily diminishes the impact of the report and has sadly led some members of the Voice of Holbeck to quit the group.”

“I would like to reassure the local residents and all stakeholders in Holbeck that we remain absolutely committed to listening, learning and engaging directly with them regarding all aspects of the Managed Approach and how it develops moving forwards.

“We recognise that a key issue for us is to ensure we have the most effective way of connecting with as broad range of local people as possible so they can be kept informed about our work and that their ideas and thoughts can be considered and taken forward where it is appropriate to do so. In developing this approach we are also directly responding to one of the recommendations in the recently published Independent Review which suggested the current ways in which we were seeking to do this were not as effective as they could be.

“Our work supporting local people is a priority for us due to the importance of responding to concerns in a way that can be both seen and acknowledged locally by every person who has an interest in the local area. Much has been done through our work with the ‘Voice of Holbeck’ group, including our involvement in the ‘Listening Well’ events where we met with number of local people keen to share their experiences with us. This feedback will be analysed and used to help shape our partnership work moving forward. Our efforts are now focused on extending our reach in terms of our engagement work with the wider Holbeck community in order to achieve this aim.

“By moving in this direction, we believe it will lead to more people or groups in Holbeck having an opportunity to engage with us as we progress issues identified in both the Independent Review and the Listening Well report. By doing so, they will be able to have their say on the way in which we are responding to the community safety issues in the area and particularly those that are associated with street sex work.”

You can download the Voice of Holbeck’s report here: Listening Well Report January 2021

Photo: A Listening Well meeting at The Holbeck club on 28 February 2019