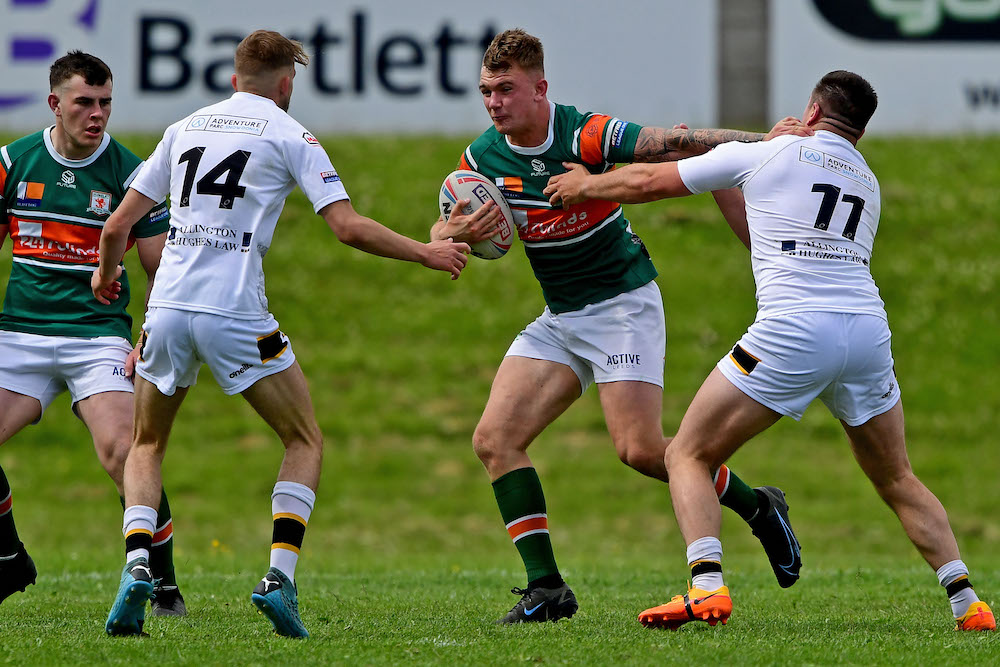 One of the games of the season ended in disappointment for Hunslet yesterday (23 July 2022) at Stadiwm Eirias in Colwyn Bay, as North Wales Crusaders scored two late tries to pip Hunslet in an end to end contest.

The previous fixture in South Leeds had been won by the Parksiders and they were well in the hunt today despite missing Captain Duane Straugheir, favourite Jimmy Watson and last week’s Man of the Match Jacob Doyle.

It took only four minutes for Hunslet to open the scoring as the hosts knocked on and Macauley Hallett took advantage after quick passing to the left. 0-4

The Parksiders had come to take the game to North Wales and only 4 minutes later a Matty Beharrell kick was fielded by Hallett again, who juggled the ball before touching down. Beharrell’s conversions weren’t successful though, and Hunslet led 0-8 after as many minutes.

Eventually Crusaders got with the pace of the game and started to put kicks on the Hunslet defence. Jordan Paga handled most at full-back, but eventually the hosts got into an attacking position and after Hunslet’s defence shot out too early Tommy Johnson narrowed the scores converting his own try. 6-8

Quarter way into the contest and the Crusaders were getting on top. Beharrell’s kick was charged down forcing Hunslet to drop out from under the posts. But good defence held North Wales at bay until on 28 minutes when on the last tackle Ben Moores latched onto a clever kick to score by the posts. Johnson converting to make it 12-8.

More Crusaders pressure was soaked up until on 31 minutes a loose pass was intercepted by Mackenzie Turner who showed a clean pair of heels over 90 yards to score a try and give Matty Beharrell an easy conversion. 12-14

Turner again was too quick on 37 minutes after Jordan Syme plucked a Crusaders kick out of the air, fed Macauley Hallett who passed to Turner and the winger put on the afterburners to give Hunslet a 12-20 lead.

Although North Wales again forced Hunslet to drop out the Parksiders left the field at half-time with an 8 point lead after a good 40 minutes.

Anthony Murray’s Crusaders have only lost 3 league games all season and were always going to come out fired up in the second period. Both sides settled into an intense arm wrestle and Hunslet’s defence was having to do some heavy work.

After Hunslet had been forced to drop out the pressure got too much for the Parksiders and quick passing sent Rob Massam over in the left corner for North Wales. 18-20

Shortly after on 57 minutes Reece Briers (son of former Warrington star Lee Briers) made a break through Hunslet’s centre and good handling saw Tommy Johnson scoring under the posts for an easy conversion. 24-20 and it looked like the Crusaders were in control.

But again Hunslet regained composure and forced the Crusaders into a period of good defence. After North Wales knocked-on Harvey Hallas went over to score, but the referee pulled everyone back to award Hunslet a penalty.

On 67 minutes Hunslet did score though. North Wales had knocked-on and quick thinking by Hallett sent Mackenzie Turner clear again to finish off a fine hat trick. Beharrell converted and Hunslet led again 24-26.

With only ten minutes left it looked like there was another try in the game and when Hunslet’s touch finder went out on the full it was all on to stop that try going to the Crusaders.

When it did come on 85 minutes it was former Hunslet favourite Brad Brennan who proved too strong near the line. 30-26 but still time for more.

The short kick off was fielded by Cam Berry who set off up the field to get Hunslet in a good position, but the ball was fumbled on the next tackle and the chance was gone.

Reece Briers nicked a late try on the hooter to give Crusaders a 36-26 win, but the game was much closer than that. Hunslet will rue not really putting Crusaders to the sword at 0-8, whilst the home side will be glad to come away with a hard fought victory.

Hunslet take on Midlands Hurricanes this Friday (29 July) under the lights at the South Leeds Stadium in a game they must win to regain momentum. Kick off at 7:45pm; £15, £10 concessions and under 16s go free.