For a weekly running club attracting over 100 members the Coronavirus outbreak was always going to hit South Leeds Lakers at some point.

Seeing the devastation around the world we knew the Government would have to ensure measures against the spread of the disease, but how could we do this and keep fit.

Back in early March (which seems like years ago) we had announced the exciting news that with the help of Toshal Bhatia and Health For All we had secured a two month trial at the new Beeston Village Community Centre.

We were due to meet there on the 17th, but with the Prime Minister’s announcement about not gathering in groups we took the decision to cancel Lakers. It was the right decision, other Leeds running clubs followed and soon parkrun was cancelled and many races postponed.

Eventually an England Athletics directive came through that clubs should not meet until at least early June. But we still knew we could run in 2s or 3s at a safe 2m distance apart, so we had to think outside the box, or rather inside the box with the introduction of South Leeds Laker Isolation Bingo! 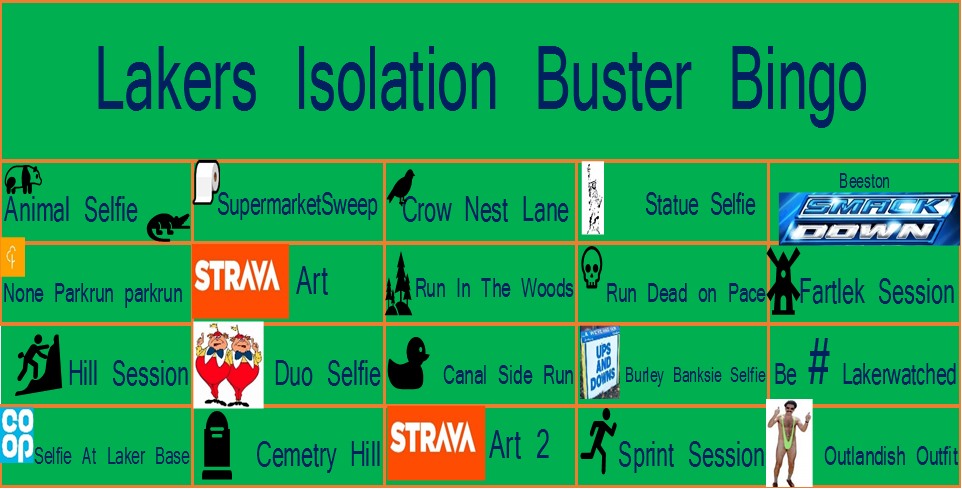 The idea was to tick off at least 2 boxes on each run with ideas ranging from ‘take an animal selfie’ ‘run up Crow Nest Lane’ and ‘run in the woods’ to challenges such as ‘create some strava art (a running app that maps your run), ‘wear an outlandish costume’ or ‘do a sprint session’.

One of our runners Becky Simmonds even ran her own marathon after the Manchester version was cancelled. She did not want to let her sponsors down who had raised money for the Alzheimer’s Society in memory of her Grandma.

Of course now things have got tougher with the new restrictions (currently one run a day, from home, alone). Luckily it’s lighter on a morning and quiet and many Lakers have taken advantage of this to keep ticking their Bingo cards.

But it’s about keeping fit in isolation too, and Rachel Clarke Williams has brought back her popular advent challenge of a set of exercises to complete each day. Also Clinic Therapy’s Nic Mawson who is a friend of the club has been doing online core classes to keep that core in condition.

We haven’t got to the point of having to run a marathon on a 7m balcony yet, but as far as I know no one in Britain has had that distinction yet.

Of course it’s not just about keeping fit in body, but in mind too, when you are part of a social group and that social aspect has gone. So we are having a weekly Tuesday Quiz and plenty of Facebook tomfoolery to keep the spirits up.

Hopefully the one run a day rule is kept, but if we are to be on Lockdown I’m sure we’ll be having a run up the stairs challenge. For now though stay safe, keep fit and hopefully we’ll be back on a Tuesday night soon.