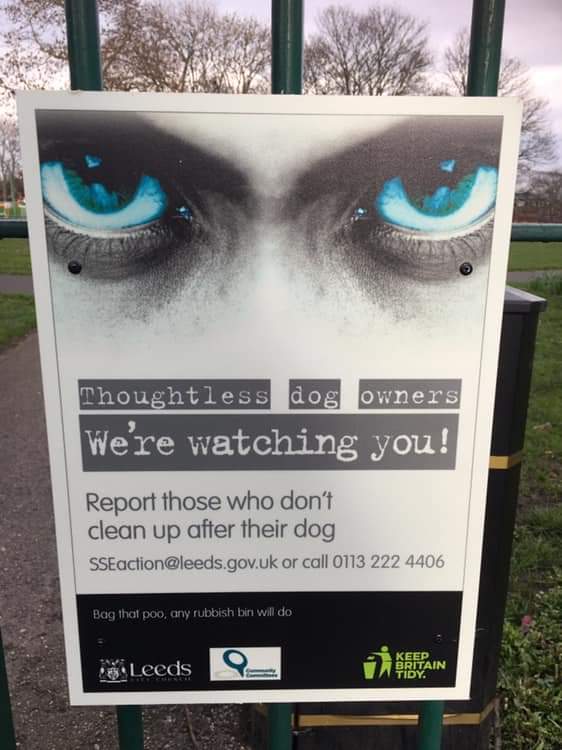 Thoughtless and irresponsible dog owners are the target of a campaign in South Leeds as local councillors in all three wards (Beeston & Holbeck, Hunslet & Riverside and Middleton Park) paid for new signs to be displayed in problem areas.

Following a trial by Keep Britain Tidy, the Councillors have invested in the signs, as they and local residents, are increasingly frustrated at the numbers of dog owners who refuse to clean up after their pets. Keep Britain Tidy have seen big reductions in dog dirt using similar signs in Portsmouth.

It is hoped that the new signs will remind dog owners both of the fines they could be facing but also the responsibility they took on when they bought their pet.

Dog faeces can have serious health consequences and can even cause blindness, particularly among young children who can come into contact with it while playing.

The new signs are just starting to appear and are in place at Cross Flatts Park and outside Beeston Primary School amongst other locations.

“There is absolutely no excuse not to clear up after your dog and it really frustrates me that people still seem to think this is an acceptable thing to do.

“Local residents do not want to be dodging piles of dog dirt when they go for a walk and children and their parents should not have to worry about it when they are playing. – Let’s hope these signs have an impact, and if they are as successful as Keep Britain Tidy have seen in Portsmouth we should see a positive change.”

“We’ve invested in an initial batch of 40 for Hunslet and Riverside Wards public greenspaces. We’re hopefully these will make an a big impact, and if successful, we’ll look to purchase more for other areas of the ward.”

“Dog fouling is literally one of our residents’ pet hates. Failing to collect a dog’s faeces is not just a filthy and disgusting act of anti social behaviour. It also puts the whole community at risk from infections, ranging from stomach upsets to toxocariasis, which in extreme cases can cause blindness. Children and pregnant women are especially vulnerable. A moment’s irresponsibility can have huge consequences.” 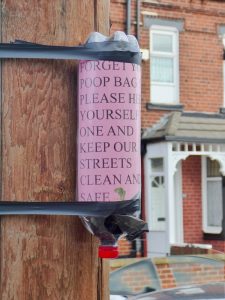 As we reported last December dog owners are required to carry the means to clear up their dog’s mess (eg a plastic bag) or risk being fined £100.

Meanwhile residents in Beeston and Holbeck have started their own initiative putting up poo bag dispensers for dog owners who forget to bring their own bag.

The dispensers are made from repurposed plastic bottles and attached to lamposts. Each dispenser is monitored by a volunteer resident.