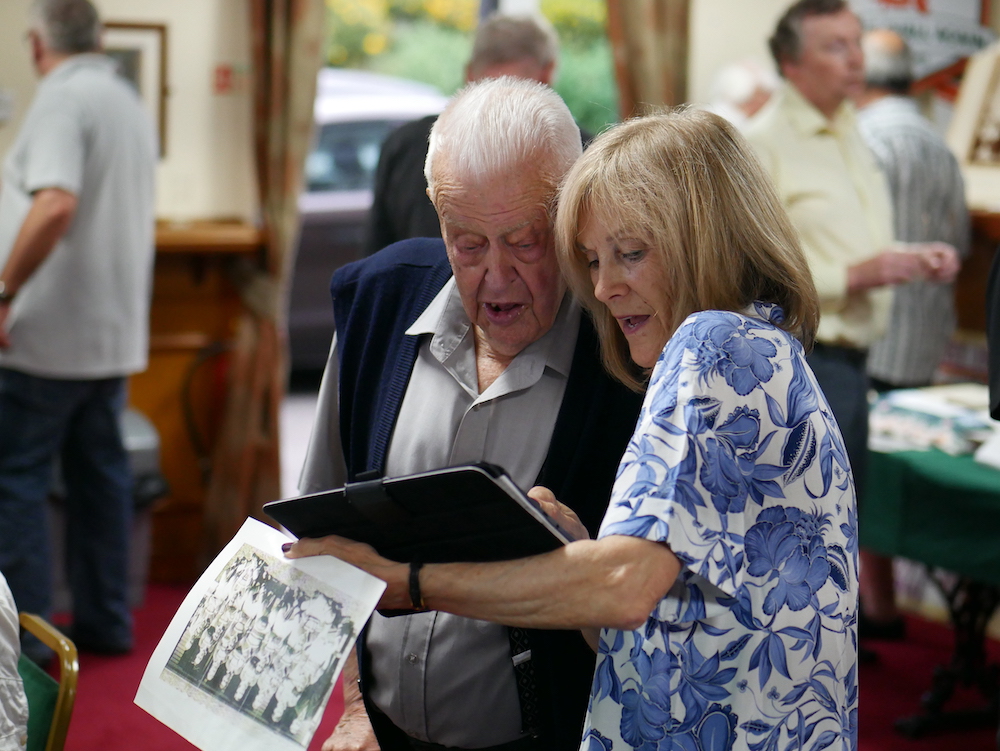 Three years in the making, the museum is on the internet so that fans around the world can access it.  So what is it?  Well, it contains an archive of about 4,000 images of Hunslet Rugby League Club going right back to the 1880s when the game was Union. There are team photos, individual player pictures, action shots and more.

There’s also the ‘museum,’ which is easier to view from a tablet or smartphone. It’s set out in rooms, each room covering an era and having the appropriate soft furnishings! This is of course all on screen: we don’t actually have a real museum, but it has taken a lot of hours by volunteers to make it the best it can be. 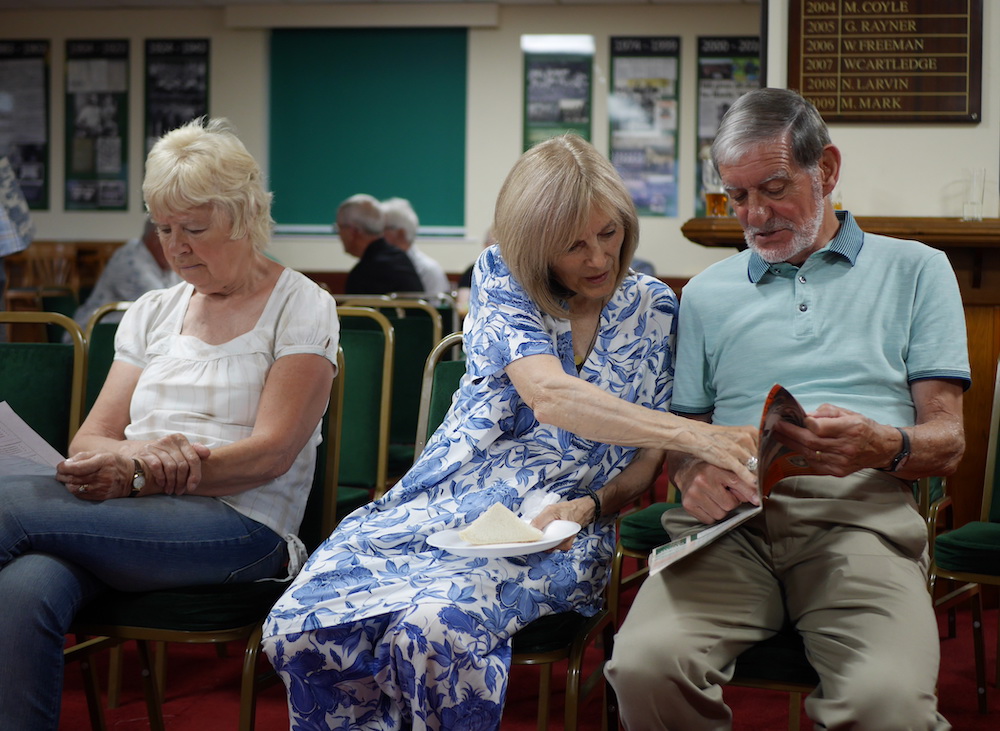 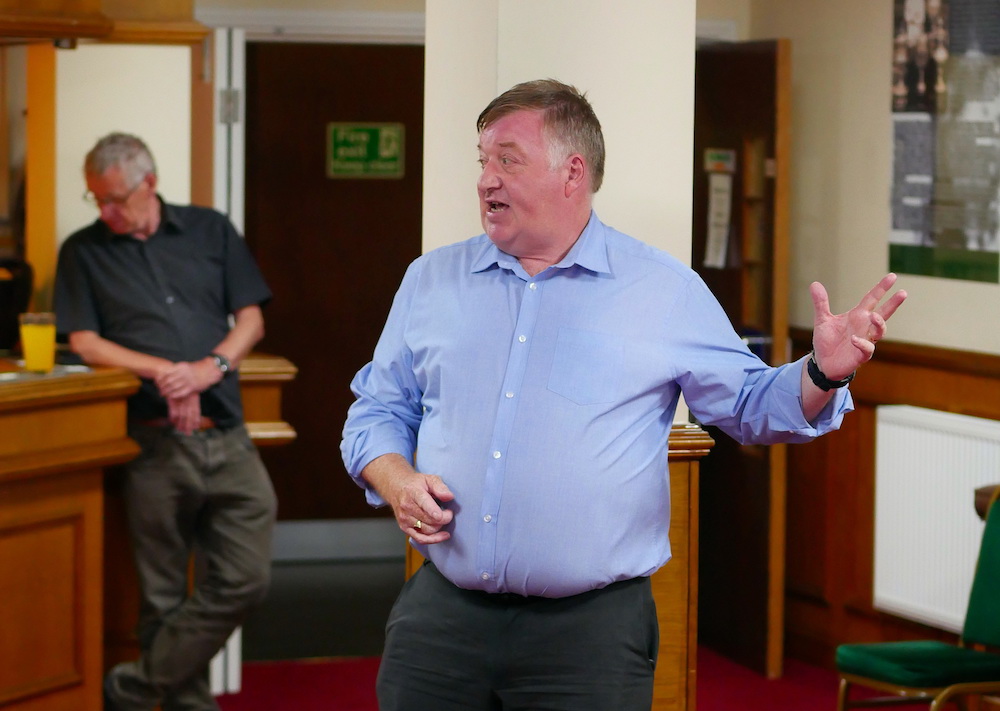 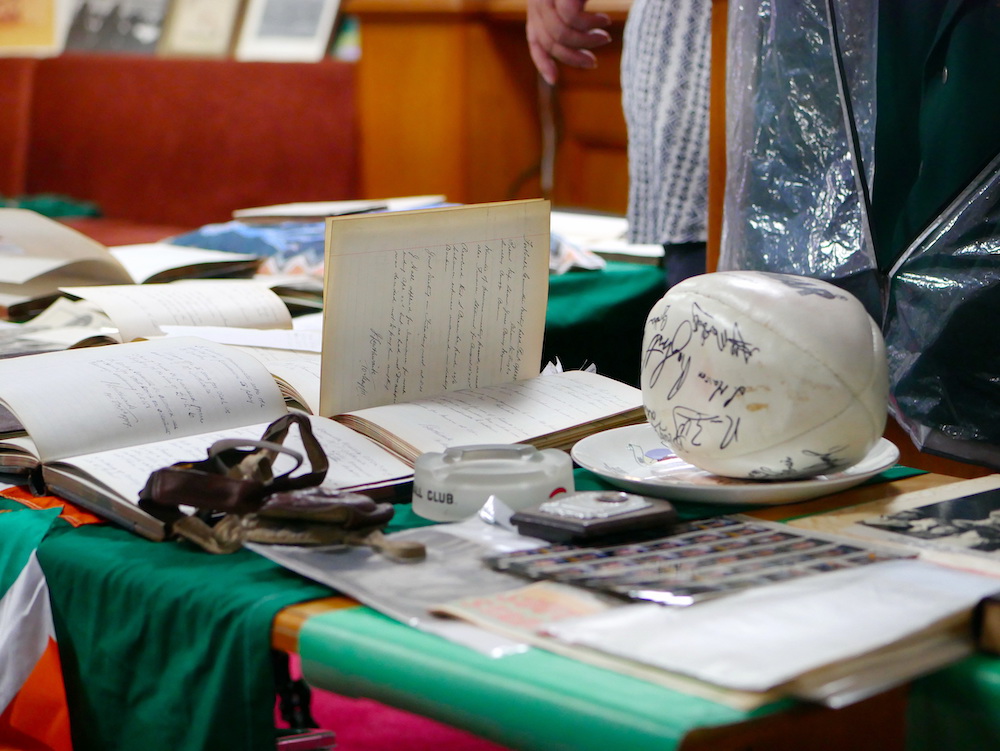 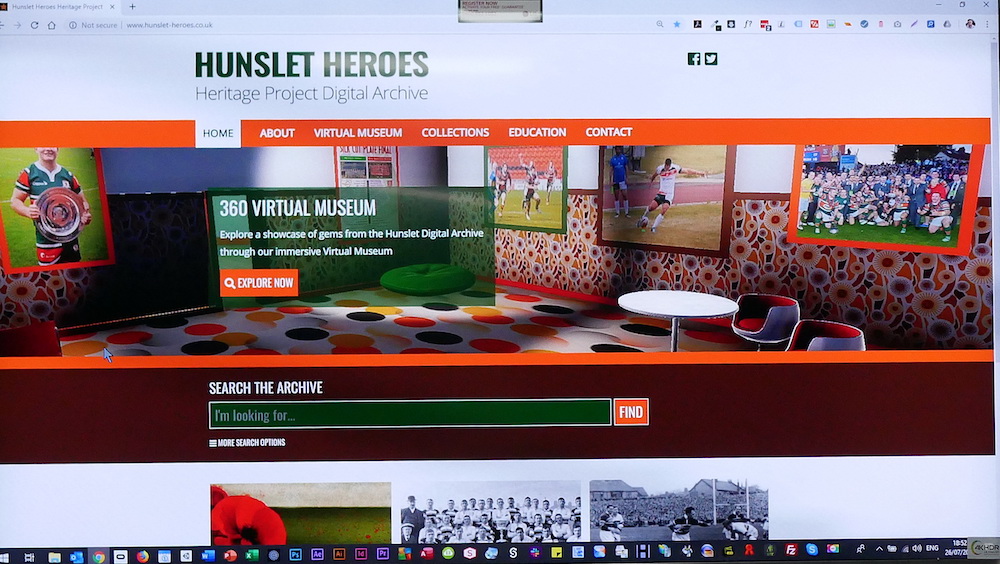 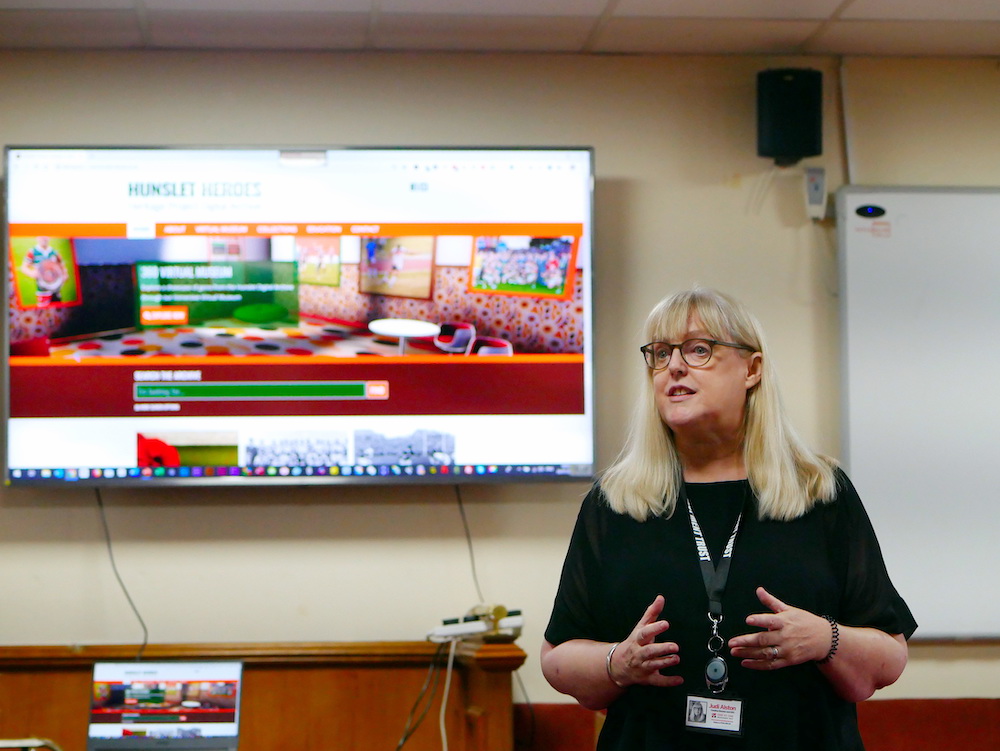 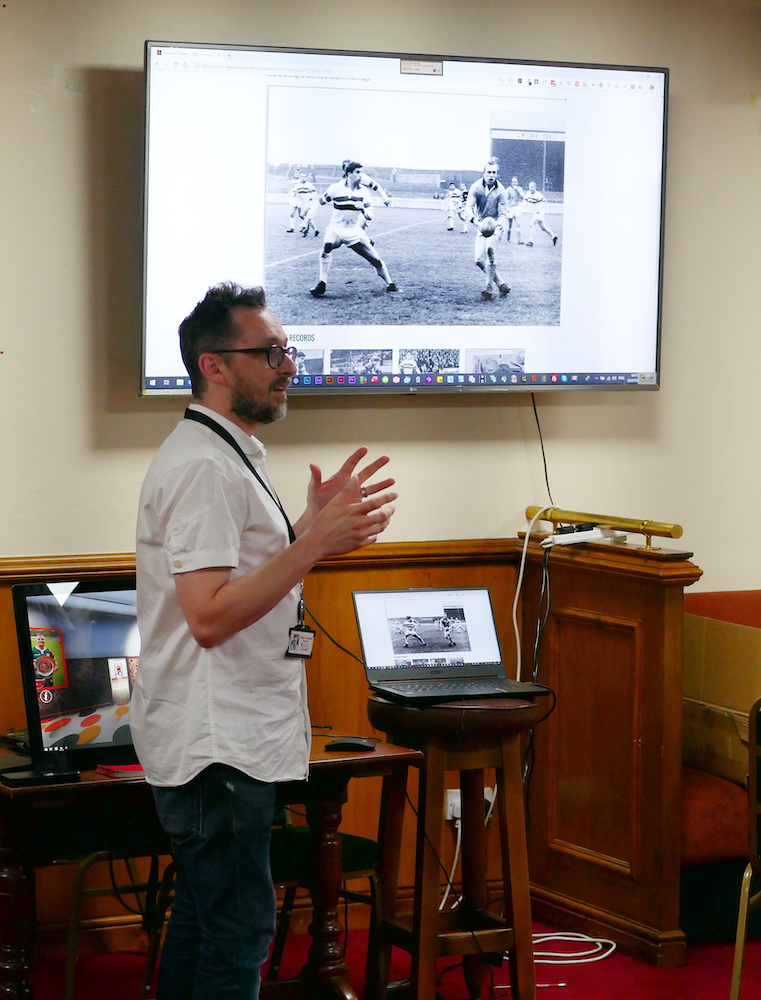 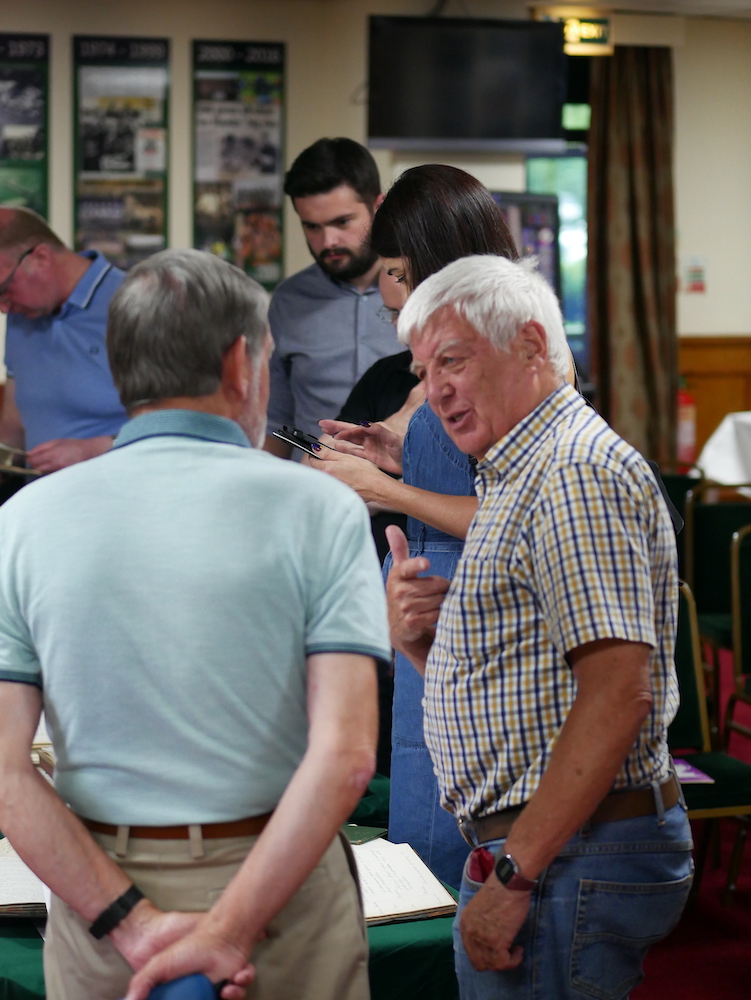 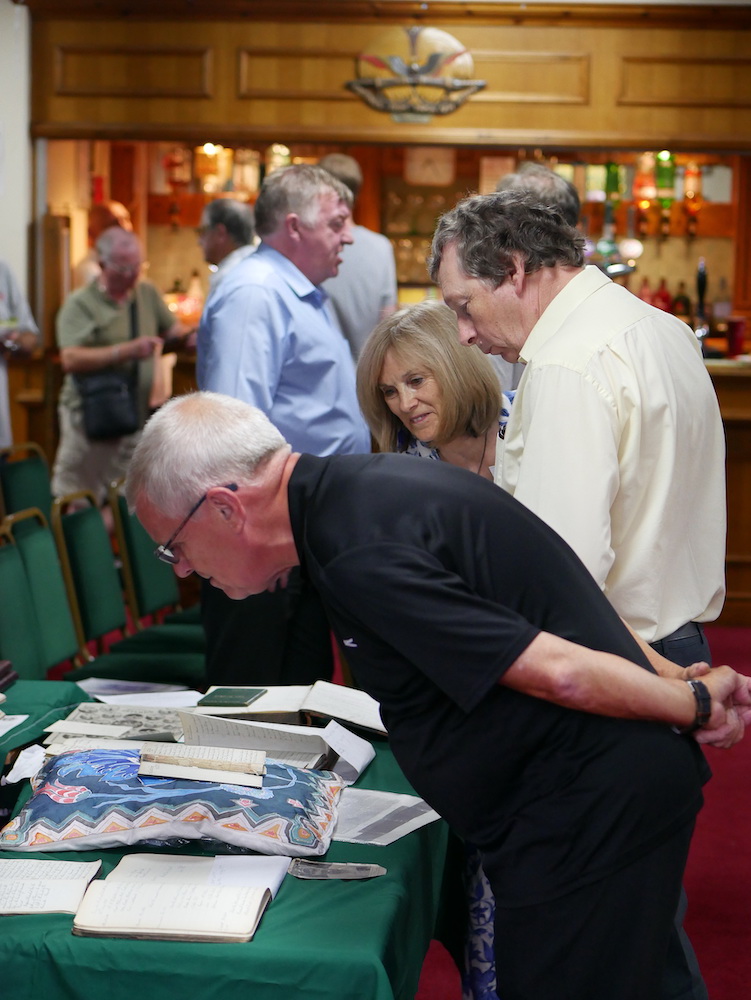 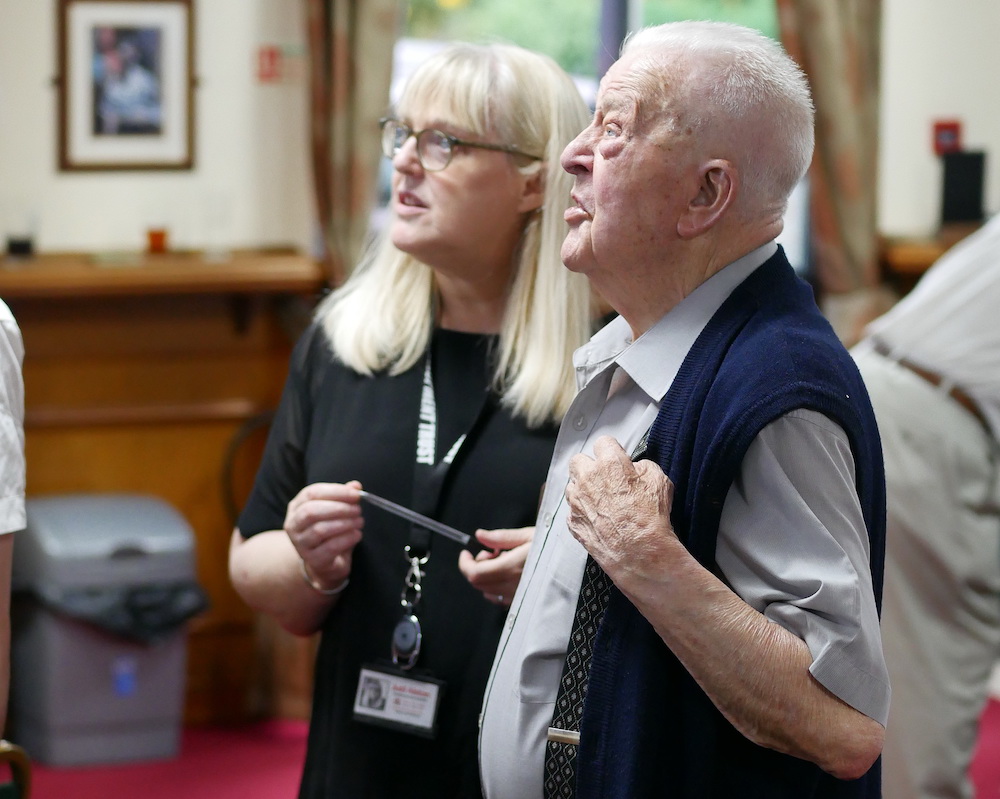 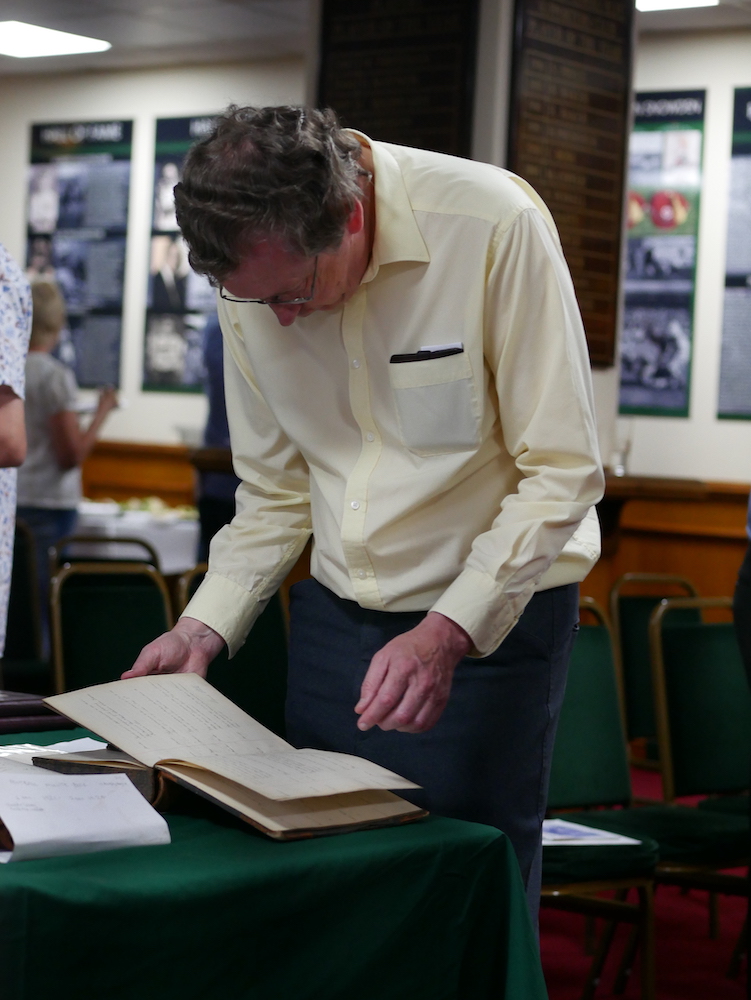 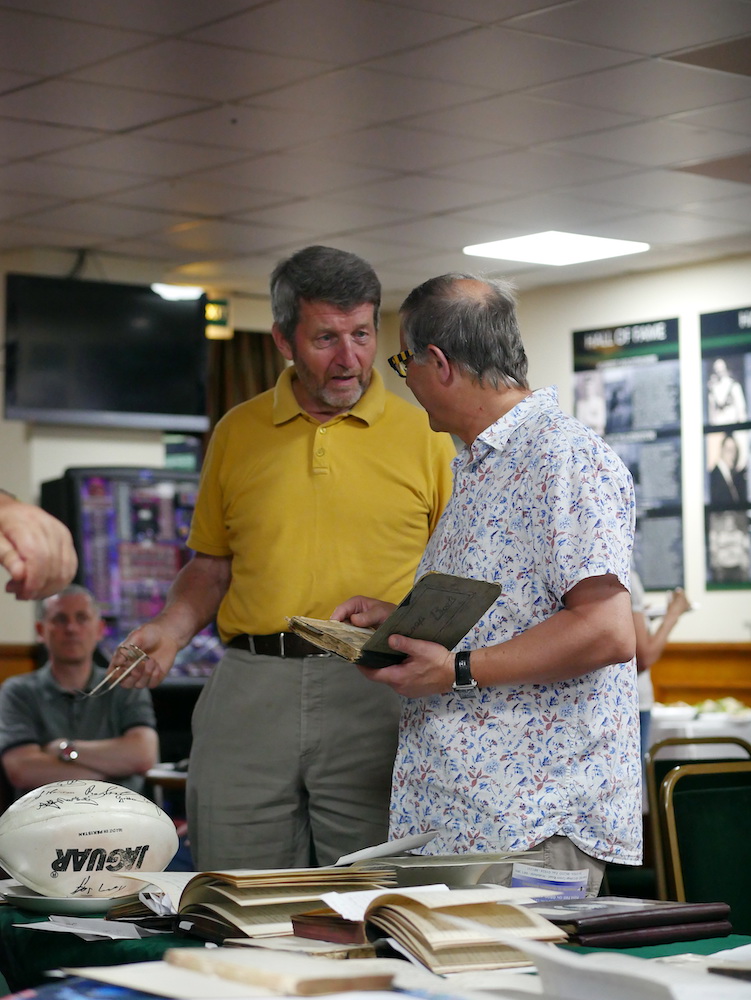 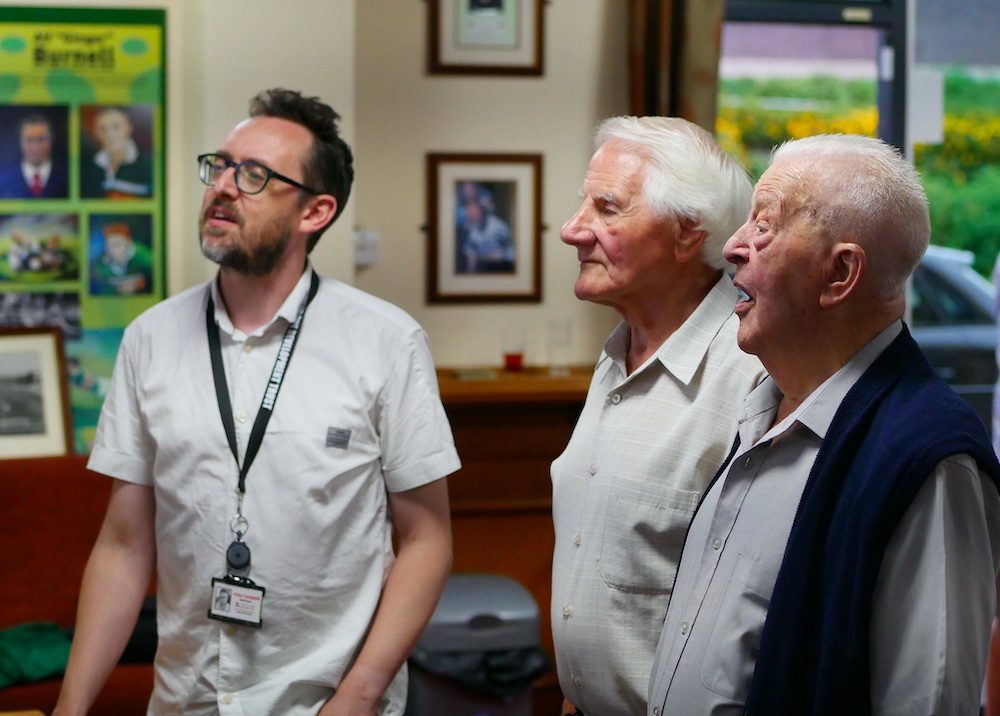 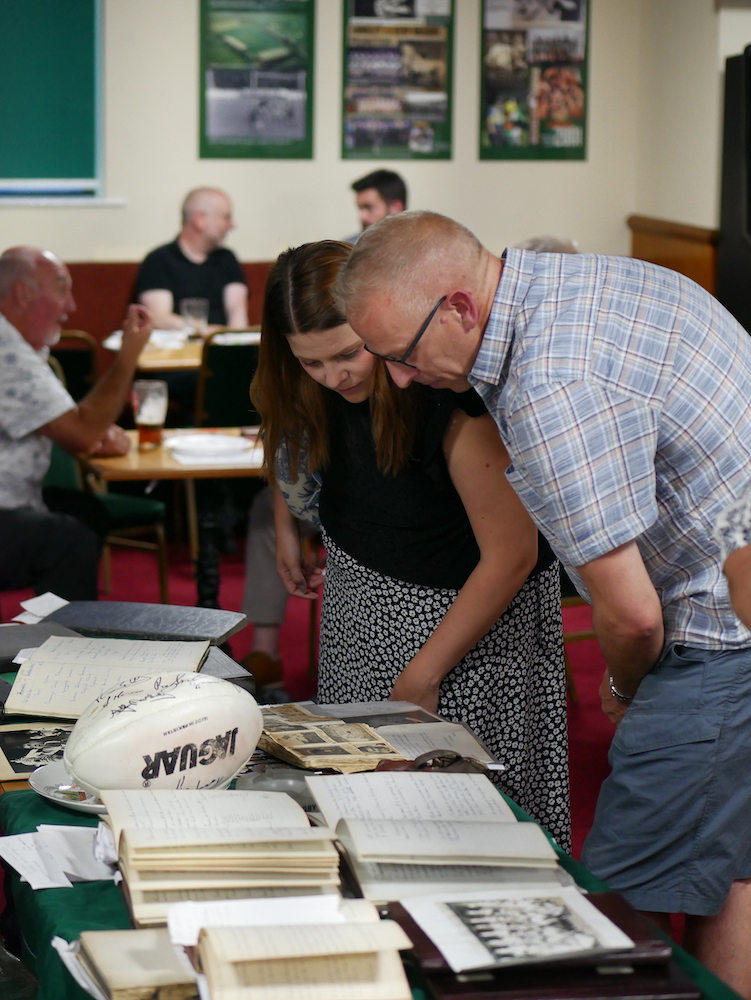 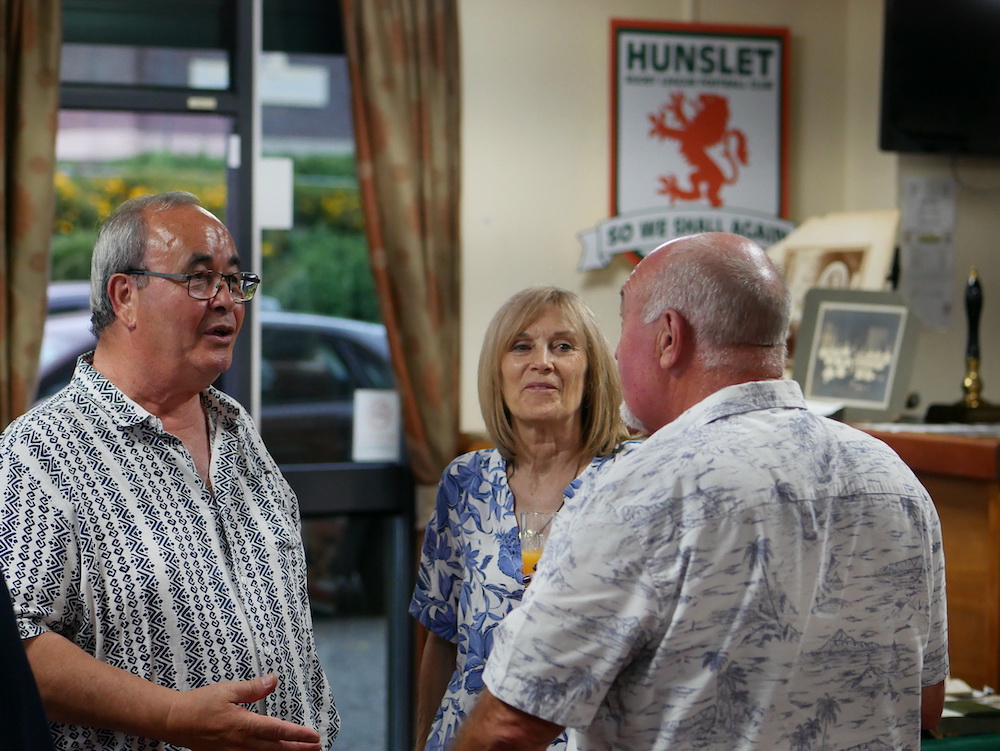 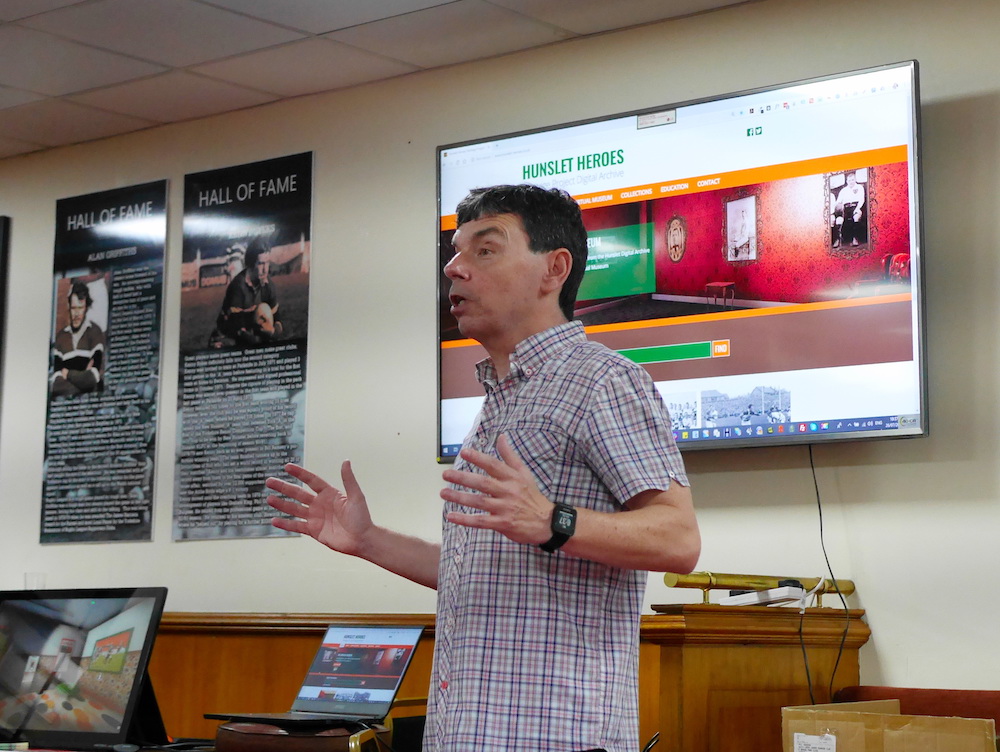 Back to the launch. Amongst the fans and guests who came were past players such as Lewis Cardiss and Bob Pickles, past coach Peter Jarvis, long-time fans such as 95yr old Jack, descendants of players – Billy Thornton’s grandson came and Albert Goldthorpe’s great grandson arrived.

“When you look at a minute book and see my great granddad’s signature you’re thinking: my family were involved in all that. It’s an excellent way to move forward. I have put some artefacts online at albertgoldthorpe.info but who will keep that website going after I’m gone?”

The power and potential of the website was demonstrated as Jack looked at a photo of the Greyhound Stadium where Hunslet played from 1973-80. Someone came up and said Billy Bremner kicked off the first game there. We checked the database but there’s no mention, yet, of the event. Perhaps you have a cutting in your attic that you could send in?

Not only was the virtual museum on display on a large touch screen, but original artefacts were brought out for this special occasion. The 1883 Minute Book, though fragile now, was open at the page which recorded that the Cricket and Athletic Club would put adverts in the Yorkshire Post inviting men down who would be interested in forming a ‘football’ team.  Football was the way Rugby Union was termed back in the 1880s.

Other Minute Books showed the workings of committees which had to determine how much grass seed had to be ordered, who would be responsible for ground maintenance, how many policemen would be needed, could Hunslet Carr use the field for their Whitsuntide celebrations, and all the minutiae of running a successful sports club.

Also on display were scrapbooks from Ken Traill, a past player who went on tours of Australasia in the early 1950s. His notebooks record that it was the proudest day of his life when he signed for Hunslet RLFC. We know that after playing for GB against New Zealand he was first to grab the match ball and that he presented it to Hunslet Carr CP School, his old school. Included in his scrapbook is a photo of Ken with the school team. Perhaps some of the readers of this paper were the boys involved?

Judi Alston from One To One Development Trust who built the website stressed that:

“The website has gone live tonight, but it’s not a finished product, I think it’s really important to stress that. We’ve put up information, but stage two will be where volunteers and the public look at items and say well that’s wrong, or I can add a story about that, or I can name that player in the photograph.”

Surprisingly it’s often the more recent content that is lacking detailed information, so if you followed Hunslet in the 1970s and 1980s, take a look and see what you can add.

World War I research was also there, laid out on the tables for fans to browse through. In fact, it was an enjoyable evening with plenty of new leads and contacts made. And each person who came could take home the original past Matchday Programme which was on their seat.

“This isn’t the end of a three year project, this is just the start. We’re really excited to use this to engage with ex-players. We’ve invited players from the 1980s to attend our match against Workington on 1 September and the 1999 Cup Final team coming the Oldham game.

“I’d like to pay tribute to Martin Flynn for the work he’s put into this project and also to Pat Benatmane.”

Mention must be made of the Heritage Lottery Fund and One-to-One Development, without whom the project could not have been completed.   We will be adding to the site as the seasons pass and any information can be passed to the club and would add to the database.

To access the site, go to: hunslet-heroes.co.uk, or put ‘Hunslet Heroes’ into your search engine. Happy browsing!

This post was written by Pat Benatmane and Jeremy Morton