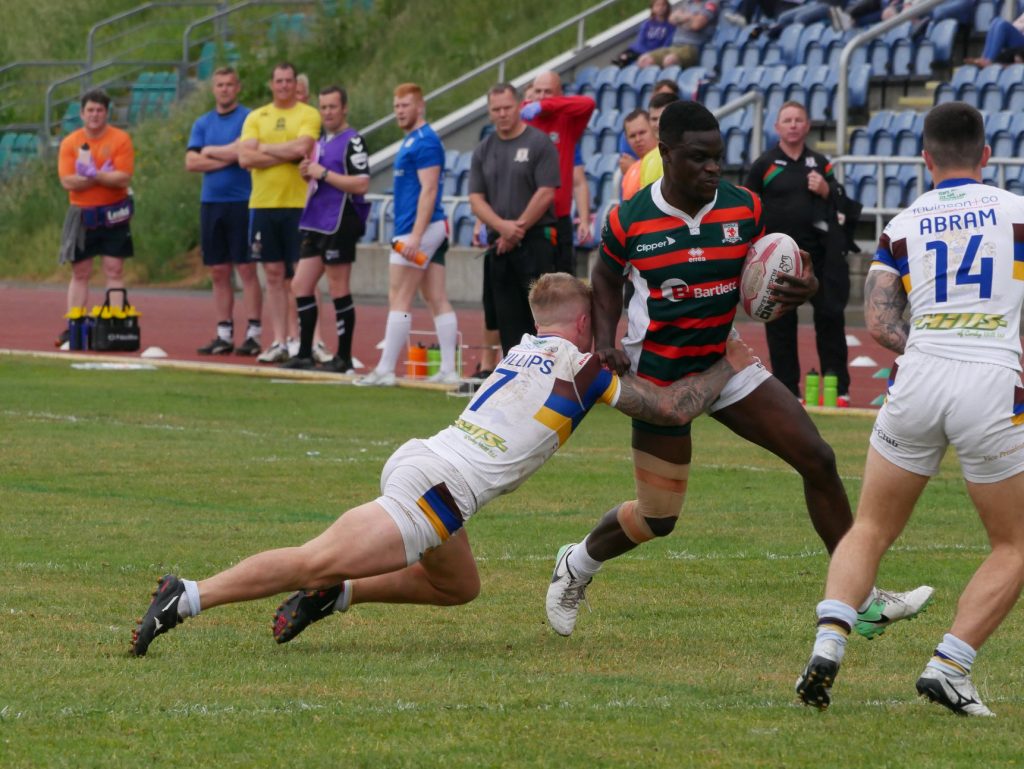 This season at the South Leeds Stadium has been good value for thrillers, and today’s game (2 June 2018) was one of the best. Looking defeated at 22-32, Hunslet came back from the dead to take the points 39-32.

The visitors could be forgiven for a sluggish start having arrived late to the stadium, but in truth it was a fairly even first fifteen minutes. A big Whitehaven pack causing Hunslet trouble.

Yet it was one of the smallest players on the pitch who opened the scoring, Hunslet’s Joe Sanderson coming off an inside Duane Straugheir ball to wrestle his way over, converting his own try.

A penalty stretched Hunslet’s lead and if it wasn’t for bad handling the home side could have been comfortable, but Whitehaven came back to beat league leaders York last week and when Dion Aiye bounced a defender off to score you knew it was going to be a tight game ‘til the death.

A Whitehaven penalty levelled things before Hunslet edged in front after a late tackle on Cain Southernwood 10-8.

Hunslet now though were getting on top and on 35 minutes a long Cain Southernwood pass put Tom Ashton in at the corner, Sanderson converting brilliantly to make it Hunslet 16 Whitehaven 8.

Michael Haley, having an inspired season then cut the Haven defence in two feeding to Muffy Mvududu who was hemmed in on the left, but Cain Southernwood then kicking to the right corner wrong-footed Whitehaven for Foggin–Johnston to score.

At 22-8 it was all Hunslet, but then a double blow. Jack Lee and Duane Straugheir (who was outstanding) had to be replaced through injury, and it was Whitehaven who had the half’s last hurrah when Foster went over from a line ball under the posts.

Whitehaven came out of the sheds full of purpose, and it was Hunslet that looked sluggish as they made mistake after mistake with the ball.

Taylor scored for the visitors on an overlap to the right, then Parker sneaked in the left corner on the last tackle, before Abram dived over taking advantage of Hunslet’s poor discipline.

But on 70 minutes the game changed, after a succession of penalties Hunslet found themselves in Haven territory, and from a loose pass Josh Jordan Roberts had the foresight to kick giving the pacey Foggin-Johnston a race to the ball which he inevitably won: 26-32.

Jimmy Watson had spent ten minutes in the sin-bin for an earlier tussle, but was now having an effect on the game, and on 75 minutes sidestepped over to give Joe Sanderson an easy conversion to level up.

Shades of the Workington Town game earlier in the season, Hunslet were calm and drove the ball up the field. A fantastic slipped pass from Lewis Reed sent Jimmy Watson on a 30 yard run, before in time the ball went back to Cain Southernwood who slotted over a drop goal to regain the lead 33-32.

Whitehaven were now spent and it was Hunslet that finished the stronger of the two. An inside ball to Muffy Mvududu coming on at pace, saw him swerve round two Haven defenders to put the icing on the cake.

Joe Sanderson’s conversion went over as the hooter sounded and the crowd delighted in a home 39-32 victory.

Hunslet are by no means the finished product, but look to have a resolve not seen for a while. Straugheir would be missed as he was outstanding, but all round a great team performance and three wins on the bounce. Bring on next week!