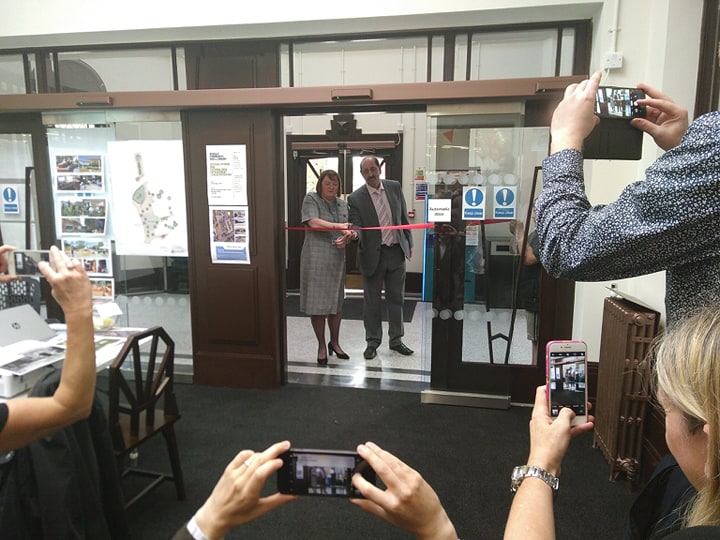 Residents and dignitaries this week (Monday 21 October 2019) gathered to officially mark the reopening of the Hunslet Community Hub and Library.

50+ people gathered in the former library, on Waterloo Road, down the side of the Penny Hill Centre – which was given a £600,000 makeover earlier this year. The building is now a bright modern venue, within an acclaimed ‘art deco’ style that reflects the 1930s era when it first opened. The centre reopened in August, but this week was the official relaunch.

The building is now home to a wide range of services, including: access to all Council departments; drop-ins with the Citizens Advice Bureau, Leeds Credit Union, Pathways, the Police, and other partners; regular community events and workshops (on coding, photography, storytime, writing, heritage, and more); tai chi and other well-being sessions; jobshop and employment advice; a free meeting room, and a new public toilet; and a large computer suite, and extended library services.

“We’re delighted with the transformation of Hunslet Community Hub, and I’d like to thank everybody involved for their continued hard work to provide this support for the people of Hunslet.”

Cllr Mohammed Iqbal also spoke, and especially stressed his pride at having helped save the library from potential closure in 2008. And Cllr Jools Heselwood (the Council’s lead member for women) flagged up that the hub was going to be the national pioneer – as the first government venue in the country to provide free sanitary products, as part of an innovative Leeds-wide scheme to beat ‘period poverty’.

The event also featured an opportunity to find out more about, and input into the plans to refurbish the exterior ‘slab’ into a ‘town square’ for the community: more info here.

The Hunslet Community Hub is on Waterloo Road, off Church Street (LS10 2NS). For more information, drop in anytime as follows: Mondays to Fridays 9am–5pm (except Tuesdays 10am–5pm), and Saturdays 10am–1pm. Or find them on Twitter or Facebook. For more on the period poverty campaign, click here.