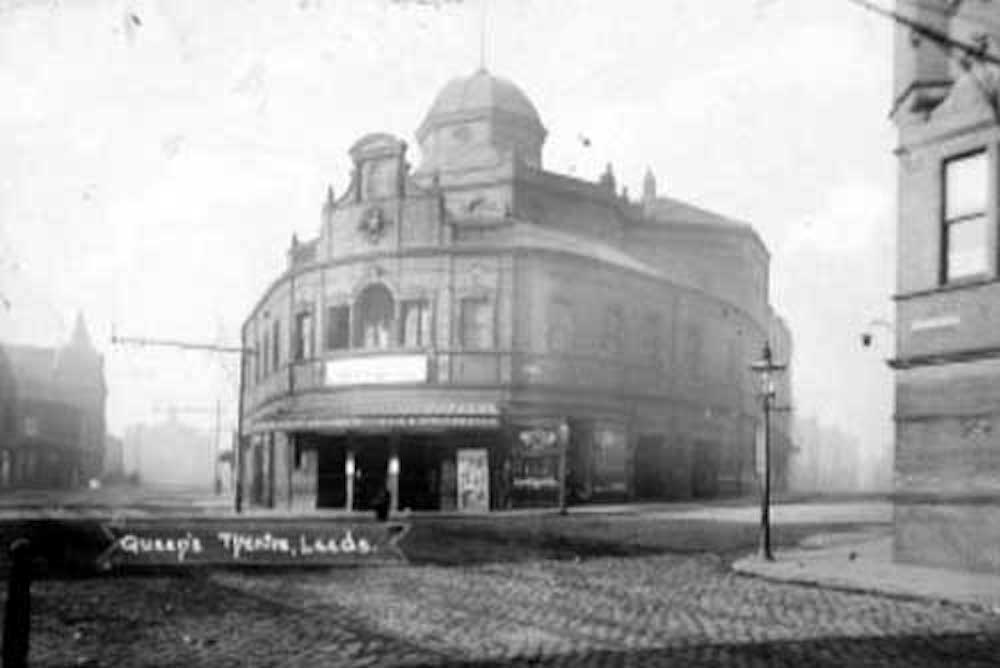 The Queens Theatre was built at the junction of Meadow Road and Jack Lane on the west side of a well-built up area of Holbeck.

The new Theatre (later to be named the Queens) was on a corner position with a semi-circular frontage and was built in red brick with stone dressings the whole being crowned with a dome. A good part of the seating accommodation is provided for more than 3,500 people, the Pit and the gallery were planned to accommodate rather more than two-thirds of the entire audience.

Ornate fittings were provided along with heating appliances, fireproof floors and staircases, electric light (the wires for supplying this had already been laid), and refreshment rooms. The stage dimensions were 60 feet by 45 feet, the Proscenium arch was 32 feet across while down one side sixteen dressing rooms were placed. Direct exits from the Theatre were also arranged from each of the three floors of the house.

The Queens Theatre opened on 24 December 1898 with a performance of “Dick Whittington” starring Clara Clifton as the Principle Boy. The Queens was home to many different productions over the years including pantomimes, variety, and plays. 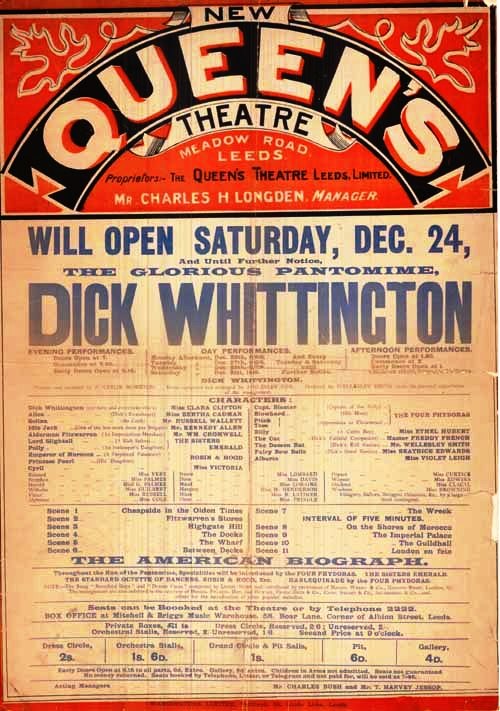 The year 1902 saw the Acting-manager Charles Bush take a Benefit, the house assembly testifying to his popularity and overflowing in every part of the theatre; even in the back circle they stood seven to eight deep. A large programme of entertainment was offered including the Dottridge and Longden pantomime “Aladdin” in full along with other artistes who were appearing in other shows in the city.

In 1905 Constance Bromley took part in a UK tour with Herbert Beerbohm Tree’s Company followed a year later Miss Bromley is said to have written the play the “Ranchman’s Romance” which was a successful production with herself in the cast on 20 June 1907.

On 20 January 1913 Freddie Hackin took part in the pantomime ‘Sleeping Beauty’ or ‘The Prince With The Golden Key’. Gracie Fields first appeared in Leeds in 1918 in a touring production of ‘Mr Towers of London’. The Theatre closed after its last variety show appropriately entitled ‘The Last Week’ on 17 July 1924.

The Architect Frederick Rhodes was then employed by Holbeck Theatre Ltd to convert the Theatre for use as a cinema. This closed off the gallery seating area and removed the pit seating to reseat the orchestra stalls. The Queens opened as a cinema on 1 December 1924 showing ‘The Covered Wagon’ starring Ernest Torrance. Although its main use was as a cinema the occasional cine-variety show was still put on.

In 1937 the auditorium was altered when the former gallery and boxes were removed while the former dress circle area was turned into a waiting area, this reduced seating capacity to 916 in the former orchestra-stalls level. In 1956 the cinema was equipped with CinemaScope; the last film to be shown was ‘Attila the Hun’ starring Anthony Quinn on 19 October 1957.

The Queens Theatre stood empty for more than a decade before it was demolished in 1968 for a road re-alignment scheme; Jack Lane light industrial units then occupied the site (between New Pribcess Street and the M621 slip road).