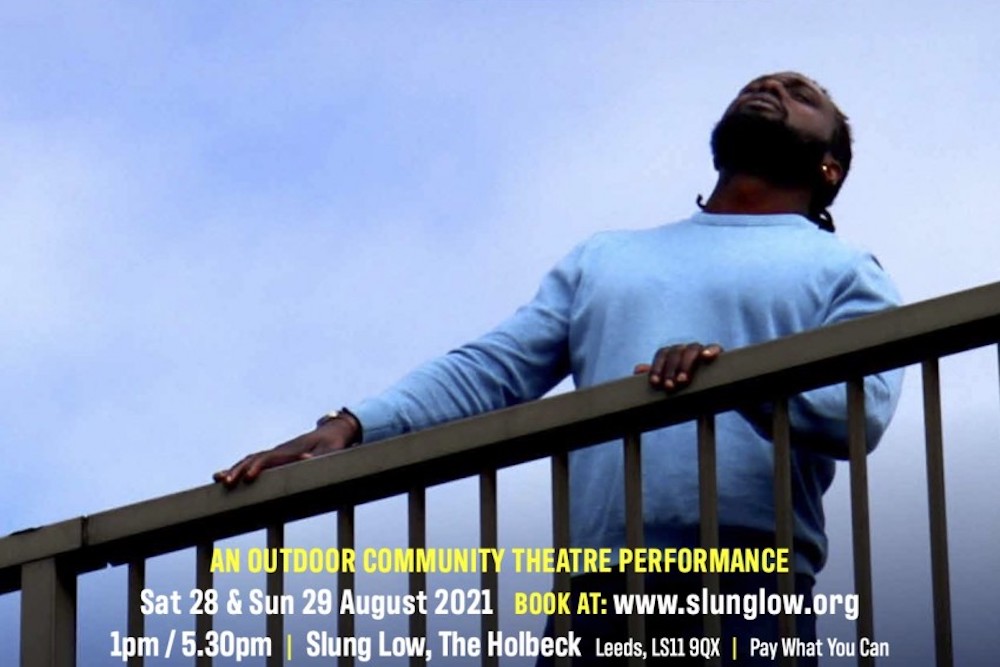 ‘Is Anyone There?’ is an outdoor performance by Imagine If at Slung Low, The Holbeck, directed by Madeleine O’Reilly. I saw this play on Saturday the 28 August at 1pm, which happened to be the premiere. Imagine If is a charity and community theatre company based in Leeds. What is exciting about this play is that it is written and produced by Francesca Joy who uses first hand experiences to inform the art. Moreover, it is a part of Phoenix programme which engages with prison leavers and people with convictions.

‘Is Anyone There?’ begins with a gentle and unspoken introductory of some the main characters followed by their party. The play is a collection of individual, heart touching stories which brought many of the audience to tears.

It is important to stress that I knew little about Imagine If prior to attending the performance and had no idea about the plot being based on real stories. It was also a big surprise for me to learn after the show that the performers playing the main characters are not professional actors. This is owing to the fact that they were very natural and authentic. Their body movements and gestured remained true to the roles they were playing. All, except one had very good pronunciation too. They managed to keep me engaged throughout the play by being truly present in the moment and exposing themselves in a way to the audience.

As I mentioned at the beginning, ‘Is Anyone There?’ is an outdoor theatre performance and it is taking place at the car park. At first the setting for the play seems to be not the best option, but it works out pretty well. The producers and director have been very creative by making the best out of the available space. The setting combined with the costumes, and the natural play by the ordinary looking men contributed to me mistaking a passer-by for one of the characters.

I was also a little bit worried that the positioning of the seats and the stage setup will prevent me from being able to see everything. However, it turned out to be planned very well from every angle. Taking into consideration that I attended this play during the day, I cannot comment much on the lighting during the performance. It was definitely appropriate for that time. I am unsure whether the audience of the 5pm performance could say the same thing.

Some speech, sound as well as the music was pre-recorded and the audience were given headphones to use through the whole duration of the play. Whilst actors had microphones and some of the music was played live, I was not able to fully appreciate the sound. This was owing to a technical issue of my set of headphones. Not all audience had the same problem, but my set had to be position in a certain way. Otherwise, all I could hear was a white noise. This has had an impact on my freedom of movement and a full appreciation of the show.

The whole production is something new, incredible and intimate at the same time. You get to hear the unheard, listen to the misunderstood, give social justice a chance and deeply connect with the characters. All whilst having a good, pleasant time at the theatre setting. It was an interesting experience like no other.