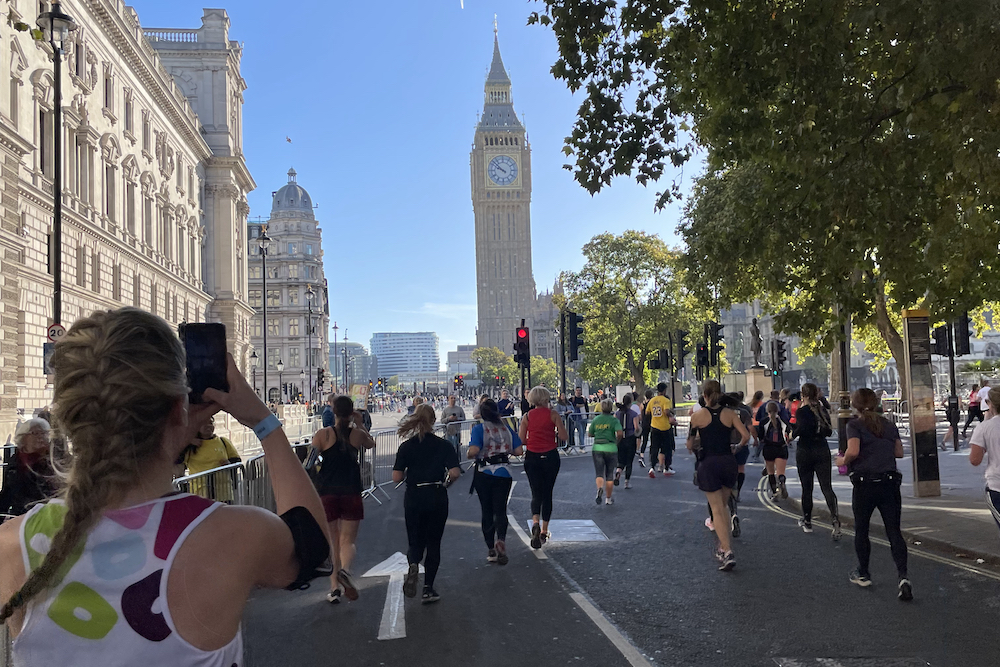 My bike was still there after I’d picked up my medal! (For the Royal Parks Half Marathon Sunday 9 October – such a beautiful sunny day, perfect for the occasion.)

I’d locked it to a steel post near to the start/finish line because it’d be close to a lot of eyes, including the race stewards’ and, tip, always use a good quality D lock and cable if leaving your bike in a public place.

To be honest I wasn’t run-ready for this event and what with the near five-hour coach ride to London because my train ticket was voided due to the rail strike it had been a bit of a palaver the day before. (There y’see, there’s always an excuse you can make if your performance is less than you’d predicted.)

I didn’t want to risk a serious leg muscle complaint after about four miles jogging so had to walk the remaining nine miles in order to finish which, I am pleased to say, I managed to do (because so many loved ones had sponsored my chosen charity, and I felt I owed it to them).

The organisers have an app so loved ones can track your progress, which my son Ben and wife Janine did. Janine was horrified that I was slowing down a mile or so before the finish line: Ben, though, was not surprised. To be honest, neither was I.

At that time I was seriously beginning to wonder whether there’d be anyone at the finish to hand out the medals, because at this tail-end many bands who’d been urging runners on had quit, park attendants were already clearing up the litter, and the general public were beginning to reclaim the designated running route.

But the medal givers had stayed, bless. Elvis had not left the building, and a truly beautiful moment as I approached the finishing line was that two runners behind me, who could so easily have overtaken me, elected to join hands with me so that we could cross the line together.

I’d used a Youth Hostel the night before near to Hyde Park (Safestay, Holland Park, Kensington) where you can get overnight accommodation in the heart of London for less than twenty quid! And it’s ‘well appointed’. Electronic door cards. Quiet. Secure.

You’re in a dormitory with seventeen others in 3-tier bunks, bottom bunks grabbed first I noticed, but the night I stayed everyone was respectfully aware that the accommodation was shared, with only an occasional snore to break the night’s silence. Also with that came the privilege of meeting an Aussie backpacker who’d just come from Budapest, and a couple from Barcelona, the connection being of course that they’d just recently come from places beginning with the letter ‘B’. But from abroad. Not Barnsley. Or Bath.

You don’t have to be participating in such events to appreciate just how special something like The Royal Parks Run really is. If you’ve never been to a marathon, or half-marathon, or 10k, or whatever before, I sincerely recommend that you check it out. Or better still, take the plunge and run. Or walk, as I did. A bit like watching your kid playing in their first football team.

So much encouragement amplified by the knowledge that we’ve suffered so much these past few years and still have so much suffering to face in these troubled times.

But here, there are some 16,000, many of whom are trying to raise money for so many charities that, on the day, I found mind-boggling. It’s that Buddhist thought: if you want to be miserable, think of yourself; If you want to be happy, think of others.

And when there are runners who have completed the race hours before you making their way home but who are, nevertheless, encouraging you to keep going … Come on! You can DO this!

Come on! You can DO this! What price can you place on that?

Janine and I laugh at that scene in Hook where Bob Hoskins claims he has experienced an ‘apostrophe’ with Dustin Hoffman (as Hook) correcting him by telling him that it was, in fact, an epiphany. I think I had something of an apostrophe/epiphany on that run/walk.

The world is not, and never has been, how I see it. By that I mean that I am just one of an estimated eight people billion on this planet, each with mindsets, values and world-views which cannot possibly be identical to mine. Eight billion of ‘em!

So, riddle me this – who has actually got their finger on the pulse?

But just because the world is not and never has been as I see it isn’t necessarily too problematic. I realised during the run that I have this over-exaggerated opinion of how so important I am when … when all I am is just an eight-billionth member of the human race.

So I’m going to try be less conceited about my own self-importance in the future. Going to have to, having experienced the gap between who I thought I was physically and, physically, who I actually am. These could just be the rantings of a 72-year old. Tell you what though. Gonna ‘keep on running’.

That’s the title of a Spencer Davis hit.