Hunslet Hawks came out winners in Kingstone Press League 1, Round 10, beating London Skolars, a team two places higher in the league before the start of the game. Winning 26-18, Hunslet dominated for the most part in sunny South Leeds, letting in two late tries to make the score line nicer towards the visitors. 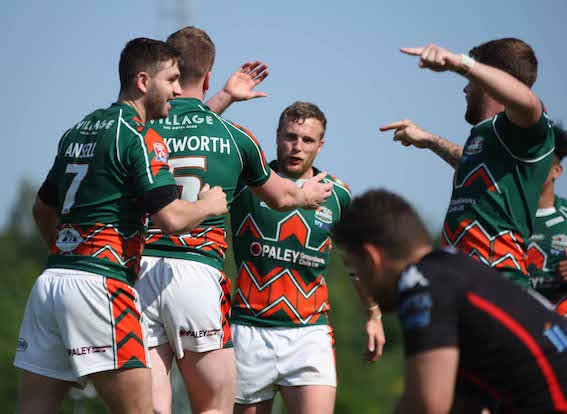 In the lead 12-0 at half time, the Hawks controlled early stages, strong drives paving the way for two tries. With the Southern-based side playing unimaginative rugby, Hunslet easily diffused their few good attacks.

The second half was a bit of a different story however, a lot more open with both teams dominating at different stages. Hunslet rushed out quickly, taking the scores to 26-6 after 2 tries and a penalty kick at goal. It stayed that way for a while before London shot into action late in the game. That, added to  the fact that Hunslet had come off the horse slightly, missing important tackles and being flat in attack, allowed the Skolars to post two late tries – much to the home fans disappointment.

The game started with errors from both teams in a match that looked to be tightly fought. Before long, good early pressure forced a goaline drop out from the Skolars where Hunslet made easy yards. And after a penalty on the Skolars line, a smooth passing play created space for fan favourite Jimmy Watson to dive over to the right of the posts. Danny Ansell kicked the conversion to make it 6-0. Hunslet, looking dangerous, had another chance in their next set, this time not converting the chance.

Strong defence from the Hawks shut down any chance London had in the first stages, where neither side looked that convincing. Substitute Billy Driver caused some trouble that led to two sets on the home side’s line that came to nothing. A strong run from in-form Hawks winger Richie Barnett led to a penalty that created a great chance that was so nearly converted, instead a kick being fumbled over the try line by centre Mufaru Mvududu.

But it didn’t take much longer for the home team to score again, Ayden Faal giving James Duckworth an inside pass to score near the touchline, finishing off great passing down the line. After the try was superbly converted by Danny Ansell, the scores came to 12-0 with no more points scored before half time.

Hunslet came quickly out of the blocks in the second half, their first set taking them to their opponents line, a penalty then giving Danny Ansell the position to scoot over for a try. He converted his own try to make the gap between the teams 18 points.

Later in the game, when the Skolars were awarded a penalty, they managed to make their way to Hunslet’s line, where danger man Billy Driver scored their first try in similar fashion to Danny Ansell’s earlier effort. The next points came when Danny Ansell kicked a penalty making the score 20-6.

Controversy came no later than the next set when a deflected kick came into the hands of Lee Mapals to storm down the wing. Looking like a sure scorer, Skolars fullback James Woodburn-Hall came rushing in to eventually pull down the Hunslet player illegally – a swinging arm making contact with Mapals’ head to bring him down metres short of the line. A mere penalty was awarded, and the Hawks failed to capitalise.

But they were to go over soon after, a simple drive that should have been stopped taking James Duckworth over the whitewash to make it 26-6, a score that seemingly put the game to bed.

But a few sets later, when a kick was strongly returned by London winger Lamack Juma and then offloaded to Israel Eliab, he went 60 metres to make the scores 26-12. On their next set, strong drives left Hunslet back pedalling, and fast hands led yet again to a Lamack Juma break – he passed inside for James Woodburn-Hall to run in under the posts for 26-18.

That meant London only trailed by 8, and with their momentum it looked very much like they could pinch it. However, a late play down the same side as the two previous tries that was diffused by Ritchie Barnett was the last play of the game and Hunslet had won 26-18.

Matt Bramald was happy with the win, saying for the first 60 minutes they dominated the show, but that they dropped off a bit in the last 20 minutes adding that he thought the score line slightly flattered the Skolars, who were only really on top of the Hawks in the final quarter.

Man of the Match: Danny Ansell not only kicked every conversion and added a penalty kick on top of that, but also scored a try himself and generally led the side around the pitch.