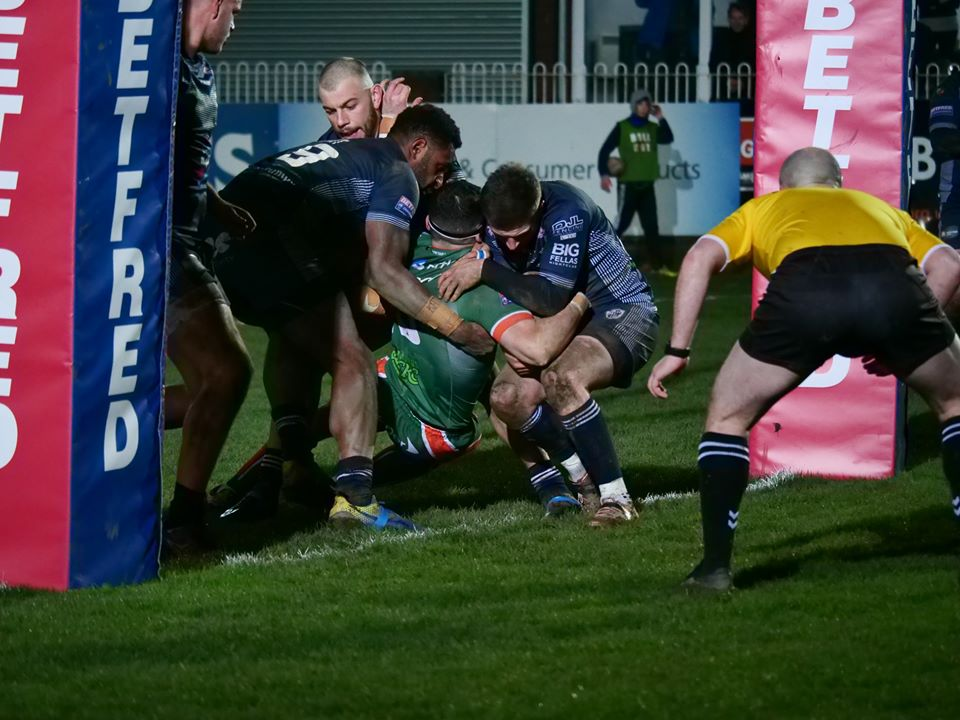 Hunslet RLFC’s perfect start to the season and dreams of a Wembley appearance came to an abrupt end at the LD Nutrition stadium on Friday night (13 March 2020) against a well drilled and high flying Featherstone Rovers outfit.

Featherstone lying third in the Championship were always favourites to win, and with Hunslet missing influential half back Dom Brambani, club favourite Jimmy Watson and season stand out Danny King, the task became even greater.

Still though, an unbeaten team at any level is always a dangerous beast and Featherstone were instructed to prepare for no slip ups.

In truth though, Hunslet gifted Rovers the start they needed. A powerful tackle shoved a Rovers forward 20 yards back to the pleasure of the travelling Parkside support, only for Hunslet to then switch off and let the acting half back Sweeting slice through their defence and round Keidan Hartley at full back to score. 6-0 after 2 minutes.

5 minutes later a simple pass from Hartley to Chrimes went to ground inviting Featherstone into Hunslet’s 20 metres. Good movement by the hosts and Ottewell scored in the corner. 10-0.

Hunslet now started to get into the game and regain some composure. Simon Brown sent a kick up to cause havoc in the Rovers defence, but Chrimes couldn’t take advantage to score, and they were soon punished when Chisholm with electric pace touched down to the left. 14-0 after 20 minutes.

Again, Hunslet got close to scoring, as this time Vila Halafihi knocked on with the line in sight. At 14-0 a Hunslet try would have set the game up perfectly, but it was Featherstone who struck twice towards the end of the half as Hardcastle and then Blackmore registered to give the hosts a 26-0 lead at the break.

Probably with nothing but pride to play for Hunslet started the second period a different team. Ben Heaton was held just short, whilst moments later the same player made a great break to set up Tom Ashton who knocked on with plenty of defenders in attendance.

Featherstone though managed to return down the field and with a bit of juggling Sweeting went over for his second of the evening, 32-0.

A pattern started to emerge of constant Hunslet pressure with no result, followed by a lightening quick Featherstone attack and try. Chrimes looked to have scored in the left corner, before with Hunslet again attacking, a loose ball was scooped up by Blackmore who went the length of the pitch to score 36-0.

Again Hunslet attacked and were held up over the line, and again Featherstone pounced from the 20 metre tap, this time through Chisholm.

With the score at 40-0 and 15 minutes to go it could have been embarrassing for Hunslet. They had been better than the score suggested and finally registered a try on 70 minutes when Ben Heaton went over after good passing and Danny Rowse added the extras.

Featherstone had the last say through Conor Carey to make it 46-6 on the hooter and deserved to be in the hat for the next round. They also look a good bet to challenge for the Championship this season, whilst Hunslet will not worry too much about this game. Players were missing and Promotion from League 1 is the absolute priority.

It was a positive to see Danny Rowse and Zach Braham back in action, and Andrade, Tonks and Conroy shone for the Parksiders, but with a Championship and League 1 meeting next week and the ever present shadow of Coronavirus will we see another game for a month or two?

As of now Hunslet are due to play London Skolars on Sunday (22 March) for a Mothers Day treat, but that is in the hands of the RFL.