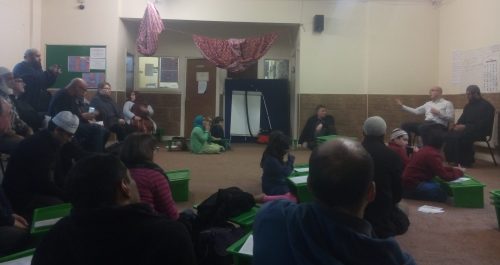 Members of two prominent local faith communities – the Kashmiri Muslim Welfare Association (also known as Hardy Street mosque), and City Evangelical church – gathered last Saturday (11 March 2017) at the mosque, to share wisdom and beliefs from their respective traditions, in what is hoped might be the first of many such encounters.

The session featured presentations by imam Qari Rumi and church leader Michael Luehrmann, followed by an extensive Q+A, and focused upon the role of prophets in the religious traditions. Themes included social justice, miracles, the identities of different prophets, and the call on all believers to be ‘prophetic’ in translating belief into the world.

“It was great to see people who wouldn’t normally meet coming together, sharing space and beliefs, and starting to form friendships. We need to find more opportunities for this kind of thing, so that we can learn from one another, and accept one another for who we are – despite our differences.”