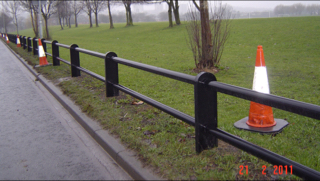 New fencing is set to be installed around Holbeck Moor to stop travellers gaining access to the site.

The new fencing will run along the edge of Holbeck Moor Road and a new gate will be installed to allow access for fairgrounds and other authorised users. Bollards will be installed prevent footpath access points being used by vehicles.

“Following the recent encampment by travellers we have listened to residents’ concerns and suggestions and moved quickly to implement this solution. I would like to thank the other funders for their co-operation.”

The site has been used by Gypsies and Travellers twice recently, firstly at Easter and then in August. The cost to Leeds City Council of legal action and clean up after the second encampment was £2,964.