Detectives investigating incidents of disorder inside and outside Leeds United’s stadium during their match with Birmingham City have arrested and interviewed a total of nine men this week following a public appeal.

Officers from Leeds, with support from West Midlands Police colleagues, yesterday (20 December 2019) arrested six men at addresses across the West Midlands in relation to crowd trouble at the Elland Road ground on Saturday 19 October.

Police enquiries have identified a number of suspects in Leeds and they are due to be interviewed in relation to the disorder.

All those arrested or voluntarily interviewed this week have been released pending further enquiries.

Work is ongoing in relation to a number of other suspects and further arrests are anticipated over the coming days and weeks.

Officers have also passed details of all the suspects interviewed to their respective football clubs so that they can put immediate bans in place in advance of any charges and subsequent court process.

Ten people were initially arrested on the day of the match, with two men from Leeds subsequently charged with offences and four males from Birmingham and Lincolnshire given community resolutions.

Since then detectives have been conducting a detailed post-incident investigation to fully capture all offences arising from the incidents and to identify those responsible.

As part of the investigation, officers released images of 15 suspects and appealed for the public’s help in identifying them. Officers are still seeking the public’s help to identify the remaining five subjects and one further suspect whose image has been released today. 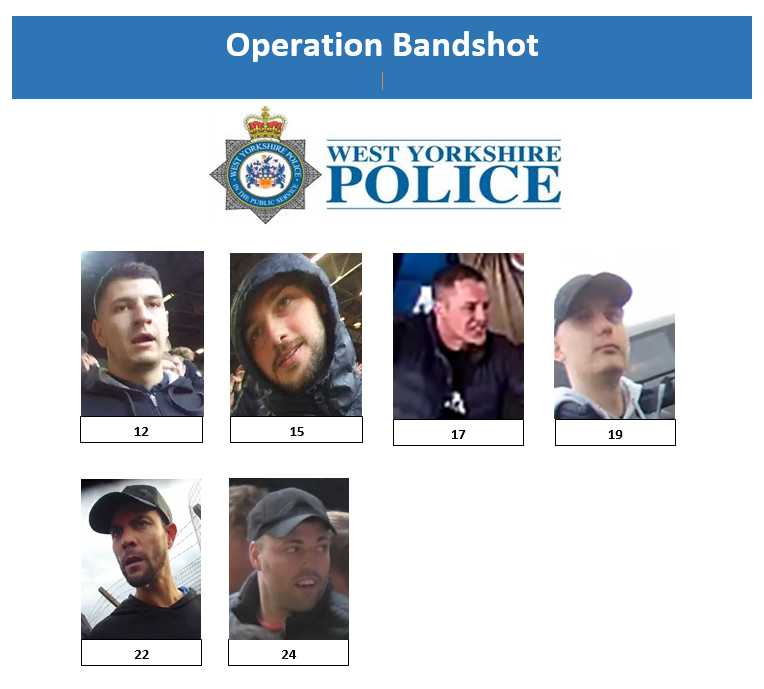 “The disorder caused by a minority of supporters on both sides at this game was completely unacceptable, and we hope the progress of our investigation and the arrests this week will serve as a very clear message to those who think they can engage in this type of behaviour.

“We are conscious that the two sides play again next week and we know that all genuine fans of the game, including the many families who attend matches, will join us in condemning this type of hooliganism as something that belongs firmly in the past.

“Our appeal for information received an excellent response both here and in the West Midlands and we hope people will continue to support us as we seek to identify the six remaining suspects shown on the images we have released today.

“We are continuing to work closely with both clubs and our colleagues in West Midlands Police to ensure that people can continue to enjoy supporting their teams positively in a safe and trouble-free environment.”

Anyone with information is asked to contact the investigation team at West Yorkshire Police via 101 quoting Operation Bandshot and the relevant image reference number or email leedsdistrict.DIU@westyorkshire.pnn.police.uk
or contact us online via www.westyorkshire.police.uk/contact-us