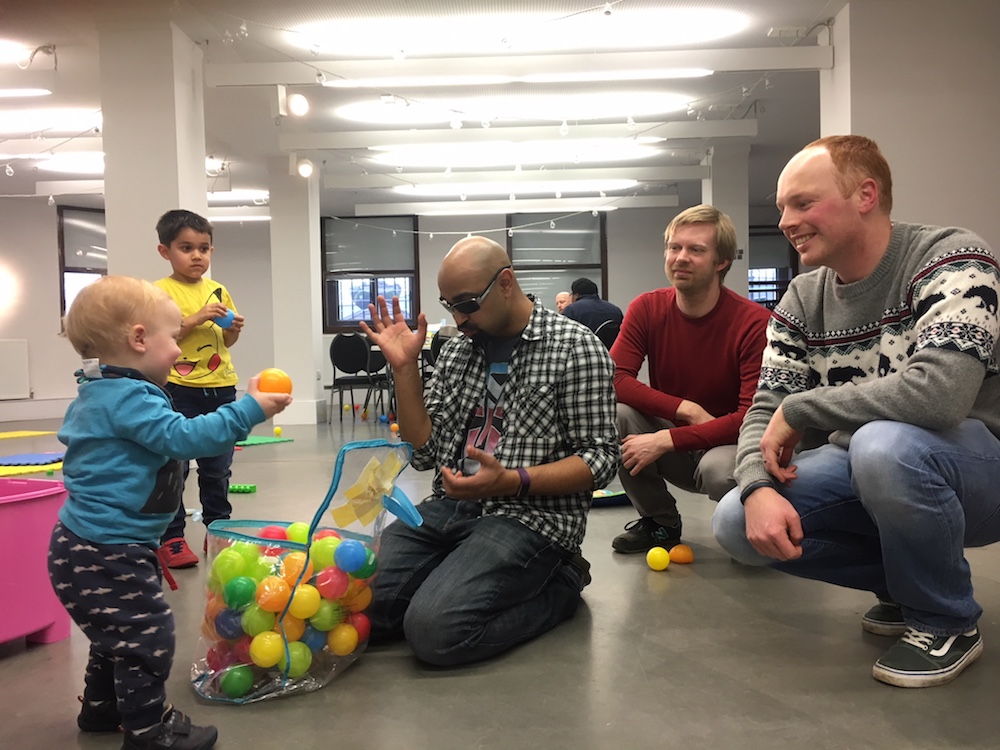 Eight out of ten dads want to see more groups and activities for fathers and their children in Leeds.

In a survey by support group Leeds Dads, 79% of dads also said they’d be interested in joining a dads’ group. And 40% of dads under 40 said they didn’t spend as much as they’d like with their children. Only 17% of dads aged 40 or over said the same.

Over 1,500 parents, carers and children attended, and amongst other activities they were able to learn to dance with Phoenix Dance, upcycle vinyl and turn records into art, jump and shout at the BoomChikkaBoom Baby Rave, and meet their favourite fairytale story characters.

There was also outdoor fun with Pop Up Sport in Millennium Square. Children were able to program a robot arm, create crazy carnival headpieces, and make their own‘Dad-Face’ biscuits – and eat ‘em!

Five hundred dads, mums and children took part in the survey at Dadstastic Day on Father’s Day in 2017 at Leeds City Museum.

It’s described as the biggest free Father’s Day party in England and is seen as a great opportunity for parents and carers to interact with their children. Babies, toddlers, and children aged up to 11 yrs old were able to enjoy: music, dance, science, storytelling, arts and crafts, and sport.

“There are very few dads groups in the city, and it’s clear that dads are calling out for more. Dads are still a bit of a rarity at playgroups, and many feel awkward and out of place there. So why not create more spaces where groups of dads can spend time actively engaging with their children?”

How much time are you able to spend with your children?

Do you feel work impacts on the amount of time you can spend with your children?

Would you like to see more groups/activities/events for fathers and their children in Leeds?

If you don’t already attend a dads group, would you consider joining one in the future?

Leeds Dads is a charitable organisation that brings together a diverse community of fathers for social interaction and support. We host playgroups for dads and kids, organise social events for dads and families, and provide information and signpost to expert parenting support.

Leeds Dads is unique in our key aim of supporting fathers to actively engage with their children, and build lasting relationships.

Leeds Dads MeetUp is a preschool playgroup for dads and kids. We meet every third Sunday of the month at The Tetley Arts Centre in Hunslet. Kids get involved in art/craft, and if the weather’s good we have games and playtime outside, followed by a singalong and storytime.