An agreement has been reached between Leeds City Council and the owners of Bridgewater Place (the ‘Dalek’ building) to reimburse the costs of protecting the public from the wind danger caused by Yorkshire’s tallest skyscraper. 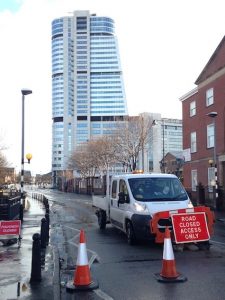 Owners CPPI Bridgewater Place have agreed to pay the council £903,000 to cover the outlay of public money so far, including the expense of having to close the road junction around the building during high winds on a relatively frequent basis.

Future high winds protocol-related costs incurred by the council will also be met as work takes place by CPPI’s contractors to install a complex design solution to the wind issues. The contractual indemnity guarantees full reimbursement without dispute or delay.

While sole responsibility and liability for the wind-related safety issues lies with the owners, Leeds City Council has been lobbying for the best possible solution to provide the highest of safety standards.

The wind tunnel effect caused by the building led to a number of incidents, including the tragic death of Dr Edward Slaney.

Having previously been told it wasn’t possible to tackle the problems in the road as well as around the building itself, the council refused to accept this.

The council carried out work to identify the necessary safety measures and funded their installation and implementation on an interim basis to protect the public from unacceptable hazards.

The owners have agreed to meet the costs of the road closures, along with the legal costs and money spent by the council initiating and working with wind experts on the original design solution plans before CPPI agreed to take them on and develop them.

“As a council we are clear that the danger posed by this building to the public is unacceptable and we have tirelessly pushed for nothing less than the best possible solution to this situation.

“We did not wait for the owners to act on their responsibilities but continued to put pressure on them while we set about working with leading wind experts to tackle these issues. While doing so we also addressed the junction’s safety through installation of barriers and railings, along with closures in times of high winds.

“This agreement means we are now able to recover the costs to council taxpayers of pursuing the solution and protecting the public while the owners got their plans in place.”

The costs are payable either by September 25 2019 or should the owners sell the freehold to the building, whichever comes first. Once the owners have completed the work, the high winds protocol will be revised in line with the effectiveness of the solution and any future costs to the council would also be covered.