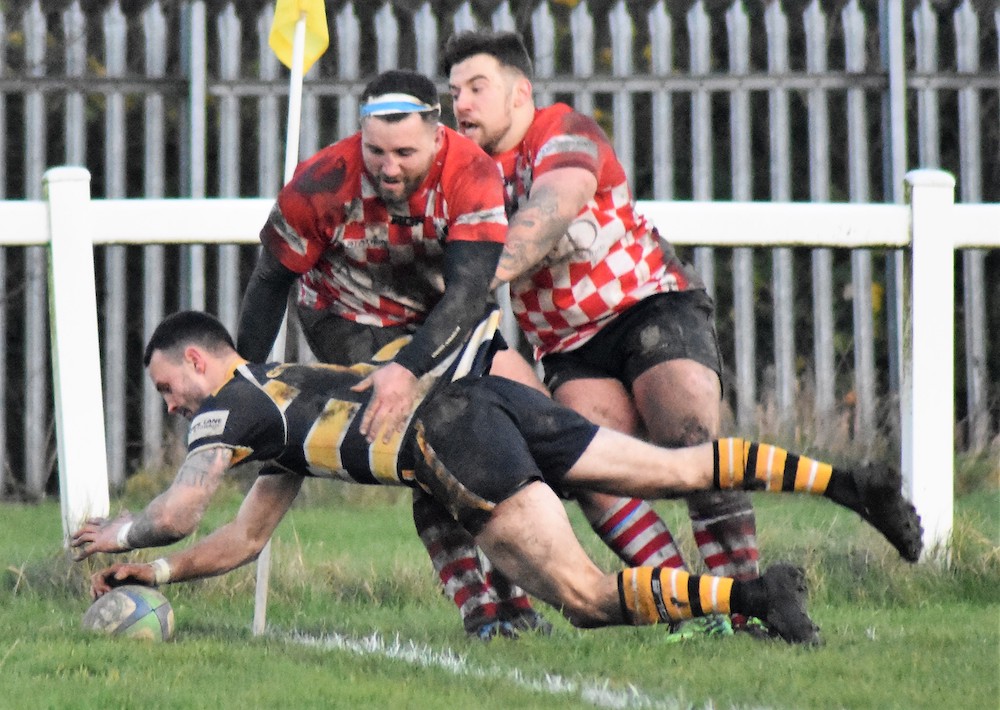 Leeds Corinthians RUFC hosted near neighbours Knottingley in the National Vase on Saturday (30 November 2019). This is a competition where clubs are invited to enter after being previously successful in the Yorkshire Vase, and the two clubs were last year’s finalists. Corinthians had narrowly beaten Knottingley in a league match four weeks ago and another close encounter was expected.

Knottingley began the game the stronger taking the lead with a penalty and were unlucky not to extend it when a second attempt hit the post. Corinthians weathered the early pressure in the scrum and regularly disrupted the Knottingley line out. They looked the more likely to score, especially when they moved the ball wide and after a couple of wasted chances they took the lead. The ball was moved wide, full back Gareth Moore joined the attacking line and found the room to put wing Ellis Robinson in the corner for a try, Moore added the conversion. A second penalty to Knottingley gave Corinthians a 7-6 half time lead.

Knottingley started  the second half the stronger and quickly scored a converted try to take a 13-7 lead, however with the second half barely 5 minutes old they made their chances of winning a lot harder. A spear tackle on Corinthians no 10 Danny Boyes resulted in a red card for the Knottingley player and they were fortunate only to receive a yellow card just 3 minutes later for illegal use of the shoulder in the tackle.

As the game wore on Corinthians were able to use the space more effectively. Robinson crossed for his second try, converted by Moore, before wing forward Chris Chapman crashed over untouched from the blind side of a ruck. At 19-13 Corinthians seemed reasonably safe however with 2 minutes left the game had a final drama. As Knottingley piled on the pressure they claimed to have touched down for a try, however the referee didn’t award it and Corinthians held out for a valuable win.

They now travel to Durham/Northumberland 3 side Houghton RUFC, In January. Next week (7 December) Corinthians return to league action with a home tie against Hemsworth, kick off 2:15pm at Middleton.