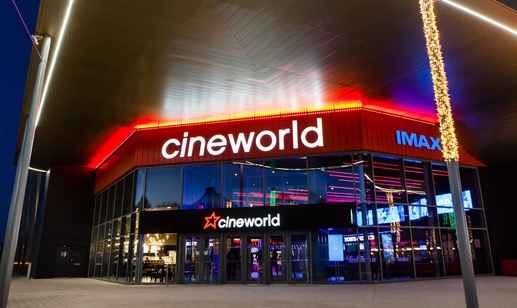 Cineworld and IMAX has now opened at the Leeds White Rose Centre with its spectacular 11 state-of-the-art screen cinema. An invitation to the launch on Thursday (16 November 2017) a day before the doors opened to the public was the screening of Justice League. As a community reporter for South Leeds Life, I was one of the lucky people to experience this along with workers and families who have been involved, including the community organisation representatives.

Entering the complex will appeal to all movie goers; strips of bright neon blue and red lights leads the eye over sharp contours of the theatre’s entrance hall, including screens of moving images of films yet to be released. Following the small crowds of people we go inside further past refreshments stalls where the sparkly midnight blue tiled floor turns into the comfortable carpeted area of sofa seated hall.  It seems hard to think that only two weeks ago we visited here to eat at a local restaurant in the new village expansion at the White Rose centre and this was still being built!

I met with Cineworld & IMAX spokespersons Steve Petersen; Cineworld Leeds General Manager and Justin Skinner; (SVP) Marketing, Cineworld. And Giovanni Dolci Managing Director Europe and Africa IMAX. They were enthusiastic to tell me more about it;

Peter said, “This is a four year project that has actually delivered a week early to meet with the release date of Justice League. Everything has been purpose built which included raising the height of the roof to fit in the biggest IMAX screen in the country 24m x 30m. Usually IMAX’s are built on existing cinema sites, but this is the first one to be built from scratch with two laser projectors delivering superior picture and sound quality.”

Giovanni commented saying “IMAX wants to deliver a totally immersive experience, coupled with IMAX’s customised theatre geometry and powerful digital audio create a unique environment that will make audiences feel as if they are in the movie.”

Justin “Thanked the White Rose for helping accommodate both Cineworld and IMAX with over 4,800 car parking spaces and to deliver the best experience for the local community. Cineworld are the largest exhibitors of Bollywood films and first film to be shown, Tumhari Sulu, will open tonight at 8pm (at the time of writing). Usually you would travel at least 20 minutes to get to an IMAX cinema, now nearby residents can just walk down!”

I was also interested as to whether their programming would include art house films. Justin reassured me that as well as Cineworld showing blockbusters it will also host Independent and European films. They will also deliver live theatre and opera performances too.

Thinking environmentally I was interested in what happens to all the rubbish? Their recycling ethos is adhered to under the White Rose centres’ winning green policy. I think I’m yet to find a cinema where everyone goes and takes their rubbish out, but I did notice big bins in the sofa area.

Cineworld has £2.50 priced tickets on Saturday mornings and every day in the school holidays, showing films passed for families. There’s also an option to purchase and ‘Unlimted Card‘ – which lets you watch any film any time as many times as you like and get 10% off snacks and drinks. You also get exclusive premier screenings of upcoming releases.

Cineworld is fully accessible with ramps and lifts and providing disability seating towards the back of the cinema rather than the front. They also have Autism Friendly Cinema screening on Sundays. And last but not least Cine Babies, you can bring your baby to experience films and meet other parents! Check out the program here.

Excitedly everyone enters the auditorium with over 300 seats towering high but safely and comfortably, with enough leg room for people to walk past. IMAX lives up to everything that we’ve been expecting; and delivers a superhero film in a super setting. This women wonders whether it can get any better?!

5 Replies to “Cineworld and IMAX open at White Rose”