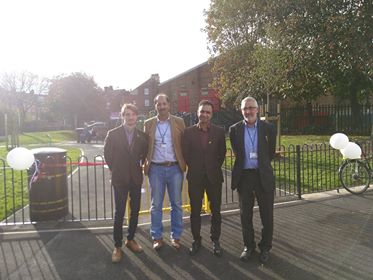 This week (Thursday 4 October 2018) saw a sunny celebration event to mark the official opening of the new Council housing on the Garnets in Hunslet Moor, and the reopening of a refurbished play area in the neighbourhood.

“We’re very pleased to see this development completed, and this pocket park much improved. It’s taken a while, but it’s been worth it. It’s a great example of our continued commitment to Leeds being a Child Friendly City, and sharing the wealth of the city by investing in the most in-need communities.”

And local residents, especially those of the 25 new houses, were not short on enthusiasm. Thahmina told us: “The park’s great, the kids all love it”. Simon said: “We were squashed up into a tiny house before, but the new one is brilliant – and the area’s not bad”. And Clara added: “We’re very happy. Our old house was far too small, and the new houses are good quality. We use the park too – it’s nice”.

The new public playground is on Garnet Place, just one minute’s walk from Dewsbury Road – behind Iceland. Local residents are looking to set up a ‘Friends of’ group to maintain it: get in touch to find out more. Plans are still forming for the former playground site behind the Vale Centre: watch this space.