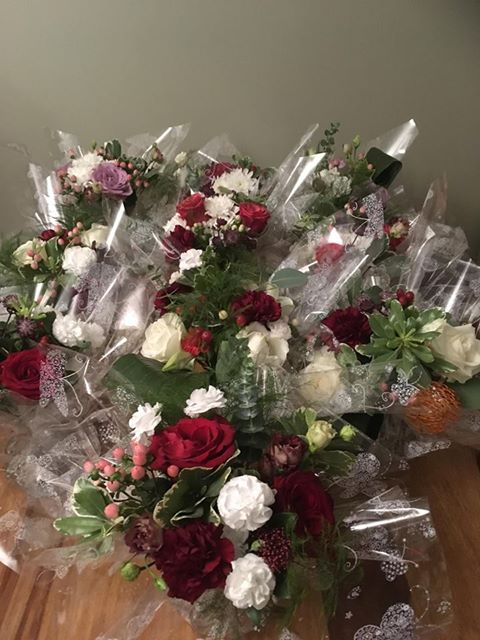 Two women from Belle Isle decided to mark the centenary of the end of the First World War in an unusual way – leaving small bouquets of flowers across Middleton, Belle Isle and Hunslet early this morning (10 November 2018).

Nicci McCulloch and Kirsty Oxley run a venue styling company and are about to open a florist shop. Having a quantity of unused flowers on their hands they decided to make them up into small bouquets and leave them around the area for members of the public to find.

Ten bouquets were left at the ten memorial benches around the area, each to represent a decade since the First World War ended.

“We thought leaving little bouquets around would brighten up the finder’s day and help people remember the sacrifice of the fallen” explained Nicci.

“We had no idea of the good vibes and feedback that this would create! We had our first message at 6:10 am from an ex-soldier, who found the first bouquet on his way to work. He loved our gesture and left the bouquet to be found again to brighten someone else’s day.”

Each bouquet had a message with it explaining that the flowers were to remember the fallen. Many of those that found them said they had given an extra donation to the Poppy Appeal as a result.

“Hi I found one of your bouquets this morning opposite Morrisons. What an amazing gesture. After just finishing a 12 hour night shift, tired and with a cold, I felt quite emotional thinking of the sacrifice those amazing heroes made for all of us, and your heartfelt gesture to remember them and also brighten someone’s day (which it did massively). Thank you.”

When the shop opens, all the bouquet finders will be invited for a prize draw where one of them will win a full sized bouquet as a thank you for being involved in Nicci and Kirsty’s adventure, spreading a little joy whilst respecting the fallen.