The Hamara Centre on Tempest Road, Beeston was the venue for a celebration event as Hamara’s ‘family’ – partners, staff and the wider community – gathered to celebrate Hanif Malik’s recent award of the OBE yesterday (20 July 2016). 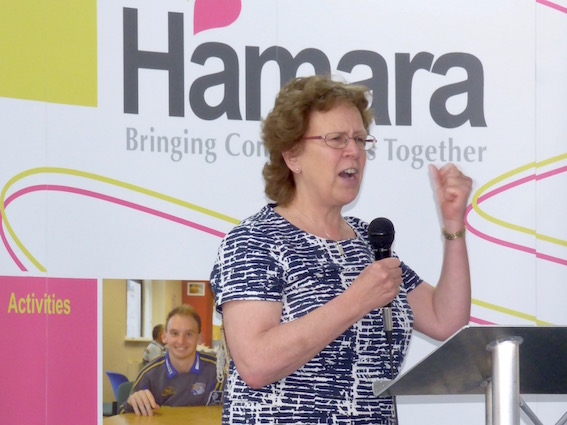 In a series of speeches the qualities that led to the award were expressed by various partner organisation, but as Hanif put it himself:

“The OBE is not about me, it is for the whole Beeston community.”

Councillor Judith Blake, leader of Leeds City Council talked about Hanif’s ability to put time into understanding people’s differing perspectives and pointing out how much we can achieve if we put our differences aside and work together.

She also reminded the gathering of the difficult time in the aftermath of the 7/7 bombings in 2005 and said that it was important that Hanif was at the centre of the community.

“It put Leeds on the map as a city of solidarity, a city of sanctuary” she said.

Mohammed Farouk, Chair of Hamara, spoke about how important is that Hanif’s tireless work has been recognised by the Queen. Alan Schofield from Leeds United Foundation talked about their joint work on the Sporting Chance project helping young men who had been in trouble. “Everyone who Hanif links with feels special” he said.

“His interest in people’s lives is more than just a job, it’s part of his DNA.”

Dean Stratton from the White Rose Centre said “You get a lot of calls to action, but when it comes from Hanif you know you have to listen.” James Bailey from Hammerson was pleased to say that the first apprentice appointed at the Victoria Gate development had come through Hamara.

In response Hanif repeated that the OBE was not about him:

“It makes no difference to me personally, but I hope it makes a difference to Beeston, to my colleagues here at Hamara and to my beloved city of Leeds.

Hanif Malik will receive his OBE from the Queen later in the year.